Will God have a say in Super Bowl outcome? 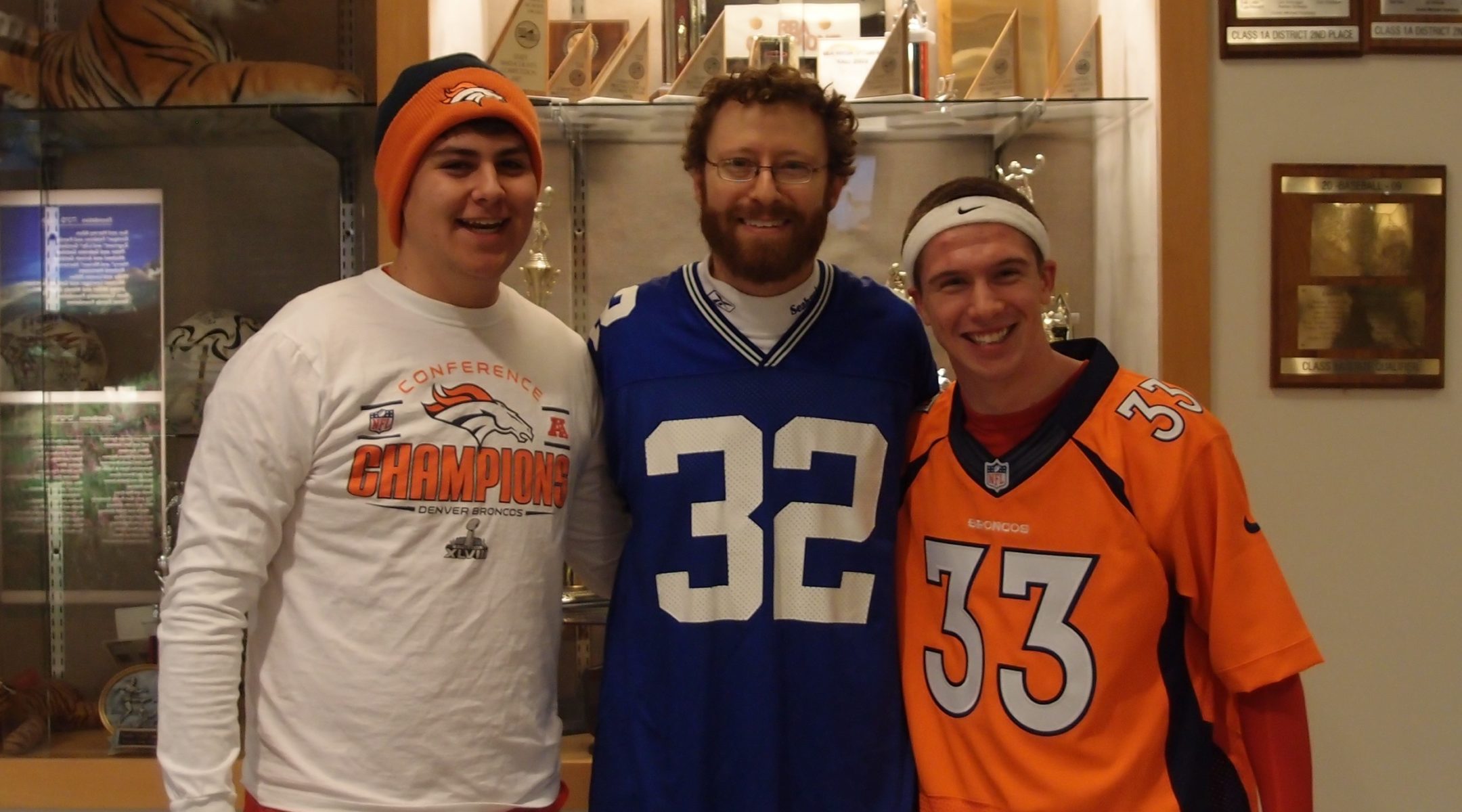 Denver Academy of Torah teacher Benjamin Levy, center, is rooting hard for his hometown Seattle Seahawks, but is mindful of his students' passion for their native Denver Broncos. (Courtesy Benjamin Levy)
Advertisement

BALTIMORE (JTA) — Rabbi Daniel Alter expects some added fervency during daily prayer services at the Denver Academy of Torah in the days leading up to the Super Bowl.

Alter, the academy’s head of school, recalls that when the Colorado Rockies faced the Boston Red Sox in the 2007 World Series, his students were more focused on prayer than ever before.

“That created a conversation on the role of prayer,” Alter said. “It brought up questions: Does God care? We probably will be having some of those conversations in the week leading up to the Super Bowl.”

With the Denver Broncos set to face off against the Seattle Seahawks on Sunday, it’s likely Jewish students in Colorado won’t be the only ones praying with a little extra zeal this week.

A poll taken earlier this month by the Public Religion Research Institute found that 22 percent of respondents believe God plays some role in the outcome of sporting events.

In its sampling of 1,011 adults, the Washington, D.C.-based organization found that 26 percent of respondents pray for God’s intervention to help their team and that 48 percent completely or mostly agreed that God rewards athletes who have faith with good health and success.

Daniel Shapiro, the strength and conditioning coach for the men’s basketball team at the University of Washington, would seem to be among them. Players and coaches for the Huskies regularly assemble for pregame prayers, a tradition maintained by many in pro and college sports, including two that Shapiro has coached: the Sacramento Kings of the NBA and the University of Dayton.

But Shapiro, who was at the Jan. 19 NFC championship game that sent the Seahawks to the Super Bowl, says the prayer ritual is less a request for divine intervention than an acknowledgment of a higher power.

“One thing I’ve noticed is, they never pray for a win. They pray that everyone stays uninjured and that He lets us give our best effort, which I think says a lot,” Shapiro said. “My take is it’s not up to God. If you pray for a win, and then don’t [win] — then what? He let you down? It’s more about we acknowledge your presence.”

Larry Bensussen of Bellevue, Wash., who will be attending the game on Sunday at New Jersey’s MetLife Stadium, said he doesn’t think God cares much about the game’s outcome either. But like the 21 percent of respondents in the religion survey who say they don a favorite jersey when viewing sports, Bensussen said he is superstitious about what he wears for big games.

On Sunday, Bensussen will be attired in the No. 54 jersey of Seahawks linebacker Bobby Wagner and a proven good-luck pair of pants, along with plenty of warm clothing for the first-ever cold-weather, outdoor Super Bowl.

Bensussen, whose wife, Shelley, is a past board chair of the Jewish Federation of Greater Seattle, will attend the game with his two sons and a daughter, who will be wearing their good-luck jerseys, too. Shelley will be  accompanying the family east for the occasion, but won’t attend the game. Too cold, she said.

Favorite jerseys didn’t work for Bensussen in 2006, when he attended the Seahawks’ first Super Bowl appearance, in Detroit. The Seahawks fell that day to the Pittsburgh Steelers.

Back in Denver, Judaic studies teacher Benjamin Levy, a Seattle transplant, said he might wear a football helmet to class — as protection, if not fan identification.

When students baited him on his Seahawks allegiance, Levy responded that the better team could only be determined in a Super Bowl matchup. Now, the day of reckoning is approaching.

Last week’s final exams limited the trash-talking opportunities, but all bets are off in the coming days. Levy, a first cousin of Shapiro, is bracing for the onslaught.

If the Seahawks win, “I’m not going to gloat in their faces, much as I’d like to,” he said. “If the Broncos win, how long until I can show my face until the taunting stops?”

But the Super Bowl is not all about competing allegiances, even in Denver. A New York Jets season ticket holder who won two tickets to the game in a raffle decided not to attend and sold the tickets to his brother, a Denver Academy of Torah board member, who promptly donated them to the school. The academy auctioned them off in a fundraiser, resulting in a $10,000 windfall for the school.

“It’s helping a wonderful cause in which kids are being educated in Torah every day,” said Kathy Bashari, the Denver Academy’s director of development. “Everyone involved did amazing mitzvahs.”