Head of the glass: Yeshiva U.’s Rebecca Yoshor excelling on and off court 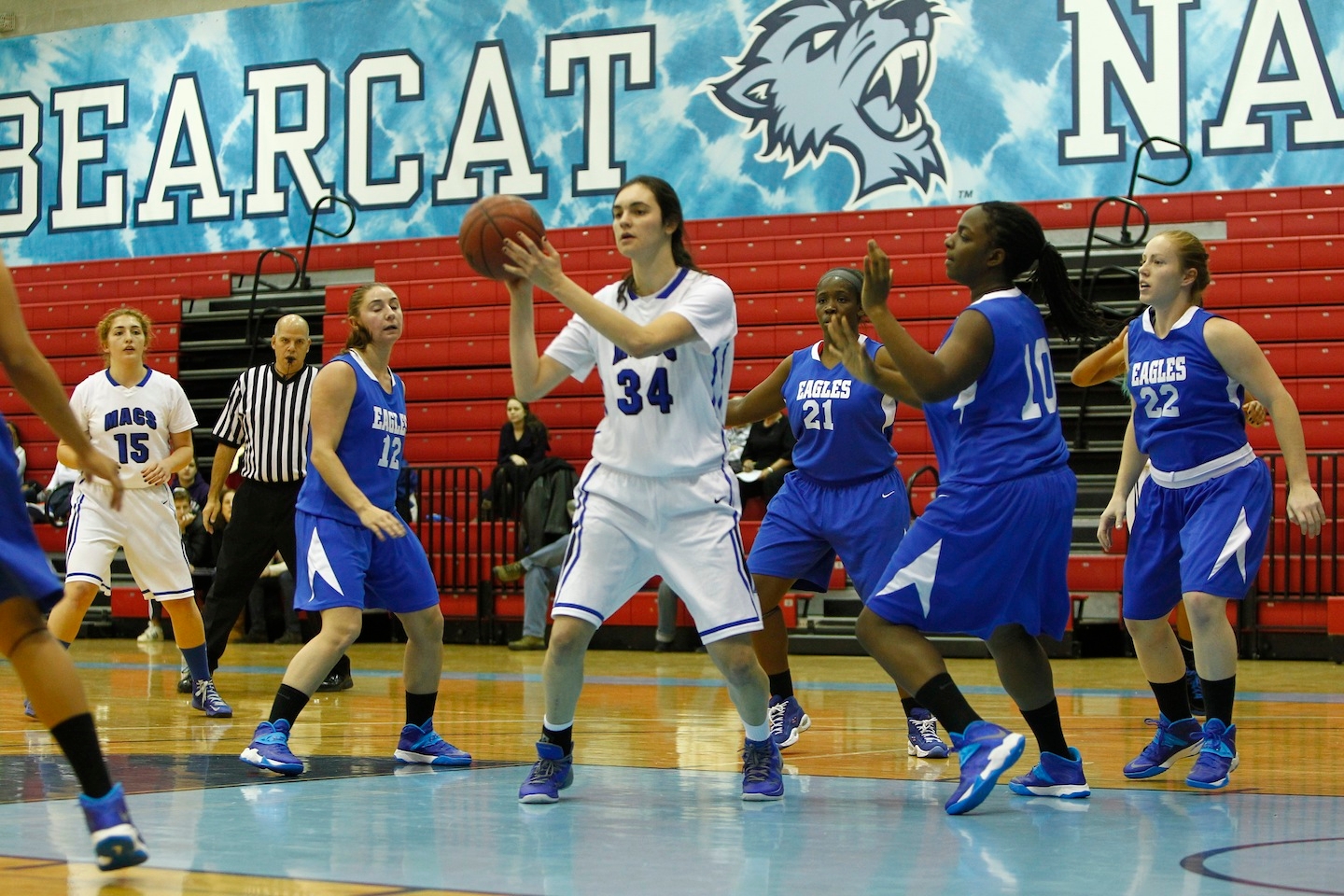 In this Nov. 24, 2013 loss to the College of Elizabeth, Yeshiva University Maccabees forward Rebecca Yoshor, No. 34, grabbed 22 rebounds, a category in which she leads the nation. (Courtesy of Yeshiva University Sports Information Office)
Advertisement

They are skills honed in what her father describes as “fierce games” with her brothers and the neighborhood kids in the driveway of her Houston home and playing for the city’s Beren Academy, where Yoshor joined the modern Orthodox school’s varsity as an eighth-grader among high schoolers.

At Y.U., the senior forward is leading not just the team but the nation — all divisions, men and women — in rebounding with 16.0 per game, one more than anyone else in Division III.

The lean 6-footer also has more blocked shots, 34, than her Maccabees teammates combined and is second on the squad in scoring with an average of 15.7 points, despite occasional foul problems that send her to the bench.

Yoshor’s rebounding prowess, her coach and teammates say, comes from superb positioning and strength. Her dad, Daniel, says it’s her hunger for the ball, but adds she could be even more dominant by getting nastier and tougher on the court.

“While I do have to work hard for every rebound I get, rebounding is absolutely a team thing,” she says, explaining that teammates boxing out help pave the way to the boards.

Led by Yoshor, Y.U. has improved markedly from a season ago, says coach Nesta Felix. While the Manhattan school’s record stands at 5-11 overall and 1-4 in the Hudson Valley Intercollegiate Athletic Conference heading into this week’s final two games, the second-year coach says the Maccabees are far more competitive than last season.

That, she says, indicates improvement and offers hope.

Yoshor says it’s all about the team.

”It’s really cool,” she says of the rebounding lead, “and now that it’s been called to my attention, it’s something I’ll be proud of the rest of my life. But I do everything I can to help the team – and if good stats come my way, that’s fine.”

She was named recently to the Academic All-America team for New York-area Division III schools by the College Sports Information Directors of America. That means Yoshor, who maintains nearly a 4.0 grade point average as an English major and psychology minor, could be selected to one of the national Academic All-America squads to be announced this week; she was a second-team selection in 2012-13.

Her studies aren’t just in the classroom.

As she grew taller and better at basketball, Yoshor says, she began paying close attention to other players, absorbing details on how they excelled on both ends of the court. It’s a habit that continues today.

Someone playing her tough when she posts up? Yoshor will draw the opponent outside and drive past her.

“They might be showing you something you haven’t seen before,” she says. “It’s the player you play against who forces you to evolve. As long as you play, there’s development. You have to be open to changing — in everything, but it’s definitely true in basketball.”

Her coach at Beren, Chris Cole, says “she held her own” on the varsity as an eighth-grader.

Daniel Yoshor says she did more than hold her own in the driveway, when her two brothers and the neighborhood kids played ball for hours, and “she’d always beat them, until they outgrew her.”

Yoshor says she took to basketball in sixth grade.

“I was definitely one of the taller people, in the back of the class picture,” she says.

For the players at Yeshiva University, the schedule is rigorous. Like all the students attending its Stern College for Women, they take a dual curriculum of Judaic and secular courses. Practices are squeezed in late at night, and they’re generally shoehorned into an 11th-floor gymnasium nearby with a halfcourt and low ceiling. “Home games” this season have been played at three other colleges.

(Gender restrictions at the Orthodox school prevent practices being held at Y.U.’s uptown campus, according to the university’s sports information director, Michael Damon.)

Several of the players said they play for the love of the game and because it offers an outlet for academics-related stress.

Yoshor adds an internship at a Manhattan literary agency – she’d like to work in publishing upon graduation this spring.

“I just budget my time as best as I can,” she says of her busy schedule. “It’s hard.”

Felix says replacing the play and leadership of co-captains Yoshor and Naomi Gofine, who already has graduated, will be a substantial challenge next year. Junior guard Stephanie Greenberg and sophomore forward Julia Owen are expected to help fill the void.

But as Yoshor exits college ball, the family has some subs in the wings who learned the game on the driveway asphalt. Her brother Zach, at 6-6, was heavily recruited and will play for Harvard following his current year of study in Israel. And 6-4 Ben is a Beren sophomore.

Little sister Jordana stands just 4-1, so her hoops future remains unclear. She is, however, only 7.