After bruising Iran sanctions battle, AIPAC conference is all about comity 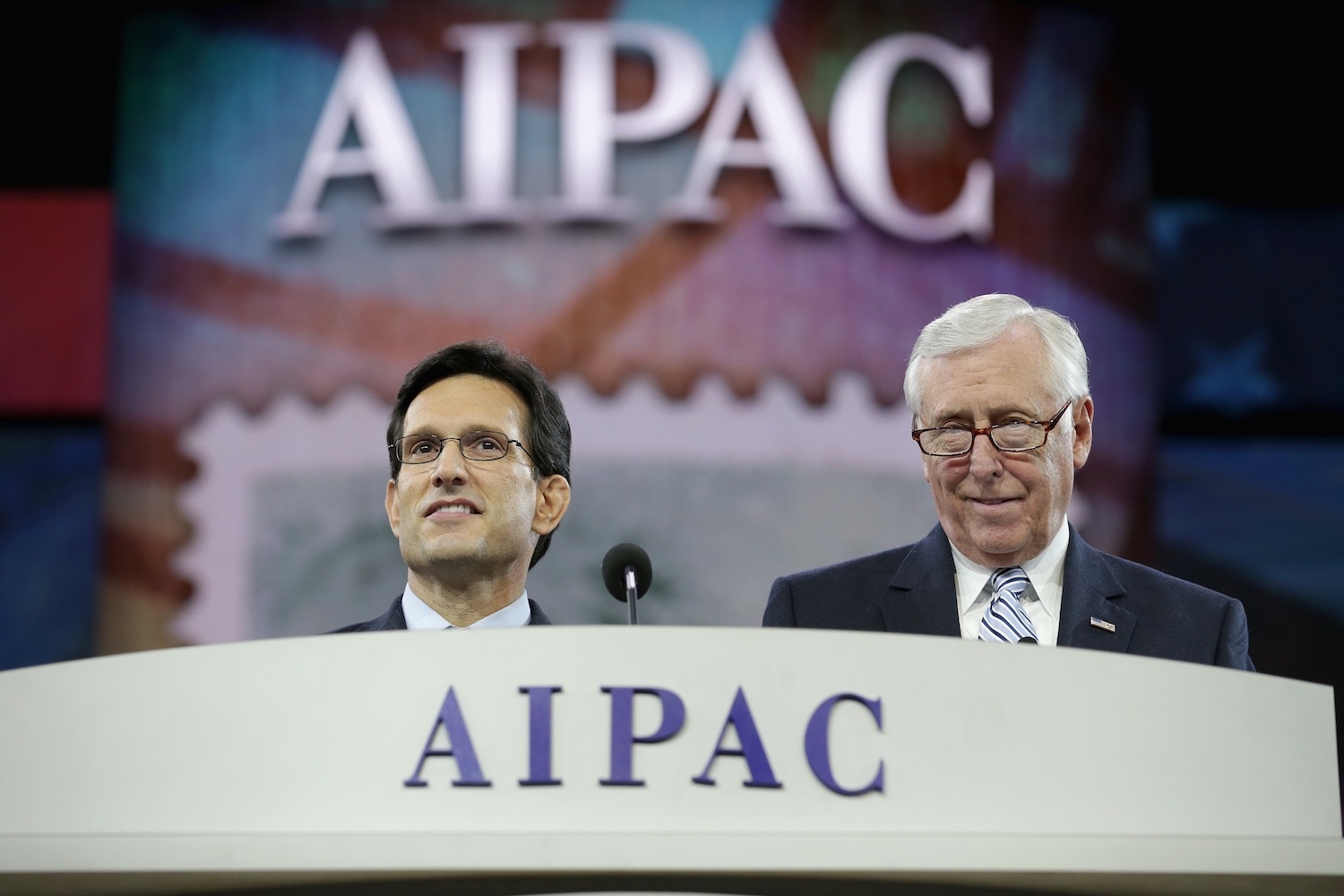 WASHINGTON (JTA) — You’ve got your rousing church choir, your multi-denominational trio of rabbis quoting Torah, your montages of Israelis and Palestinians coming together and, above all, your pleas to please, please, please be nice to one another.

That was the resounding theme of this week’s annual AIPAC Policy Conference in Washington.

Expansive outreach, of course, is nothing new for AIPAC. But in the wake of battles over Iran sanctions legislation that pitted the pro-Israel lobbying powerhouse against the White House, many congressional Democrats and liberals more generally, AIPAC’s traditional emphasis on Israel as a bipartisan issue has taken on added urgency.

“We must affirm bipartisanship in our own ranks if we want support for Israel to be championed by Democrats and Republicans alike,” Michael Kassen, AIPAC’s chairman, said at the conference’s outset on Sunday. “AIPAC’s political diversity is critical to our continued success.”

AIPAC in recent weeks has been bruised by deep differences between Republicans and most Democrats over how best to deal with Iran while nuclear talks are underway. Republicans back new sanctions as a means of strengthening the United States’ hand in the talks, and many congressional Democrats, heeding the White House, oppose them, saying they could scuttle not only talks with Iran but the international coalition that brought the Islamic Republic to the negotiating table.

AIPAC had been working to bring a new Iran sanctions bill to a Senate vote until backing down last month after it became clear that it lacked enough Democratic support to overcome a promised presidential veto. In the aftermath, Republicans were angry with AIPAC for backing away from its push for a vote, while congressional Democrats resented AIPAC’s pressure on them to break with President Obama on the issue.

The result has been an unusual vacuum for the lobby: The thousands of activists who headed to Capitol Hill Tuesday were not advocating for any new legislation. Instead they were seeking signatories for letters from lawmakers in both chambers asking Obama to make sure that Iran complies with the nuclear inspection and verification regimes mandated by the U.N. Security Council.

Additionally, they will advocate for a bill that would enhance security assistance to Israel, something they had already championed a year ago. That bill has been delayed in part because of difficulties with a provision that would allow Israeli citizens to enter the United States without visas.

The activists will also seek additional sponsors for the Iran sanctions bill, although they will not press for a quick vote.

At the policy conference, AIPAC officials did not shy from tough talk when it came to Iran. Howard Kohr, AIPAC’s CEO, focused his speech Sunday morning on countering the Obama administration arguments. He took aim particularly at Obama’s claim that new sanctions could upend the negotiations. “Pressure brought Iran to the table, and only increasing pressure could bring about a deal,” he said.

The Obama administration officials who addressed the conference anticipated the AIPAC pushback on Iran.

“Now, in the next two days or so, you may hear some say that the very narrow relief in the interim agreement has unraveled the sanctions regime or eased the chokehold on Iran’s economy,” Treasury Secretary Jack Lew told the conference. “Nothing could be further from the truth.”

Notwithstanding the lingering tensions, calls for comity were prevalent at the conference.

“It may make you sleep better at night” to criticize President Obama in meetings with lawmakers, Steve Askeroff, an AIPAC lobbyist, said at a lobbying training session, but he emphasized that AIPAC has to work with the executive branch. “It can be very tricky, but you have to navigate these waters in a bipartisan way,” he said.

The images of diverse AIPAC supporters (“I am [fill in the blank], I am AIPAC”) projected in the cavernous Washington Convention Center were interspersed with appeals to be polite to speakers. “Don’t boo, be friendly!” advised Casper the Friendly Ghost in one of the slides.

In a closed meeting, AIPAC officials asked members of the group’s executive committee — an advisory body comprising representatives from other American Jewish groups — to break up any arguments they witnessed throughout the conference.

An emphasis of the conference was the breadth of AIPAC’s outreach, particularly among African Americans and Hispanics. Chris Harris, a pastor from Chicago’s South Side, described how he had applied in his neighborhood lessons learned from trauma specialists in Israeli communities on Gaza’s border. He closed Sunday night’s plenary by eliciting “Amens” from the AIPAC activists as his church’s gospel choir sang, “We walk with you.”

AIPAC has also worked to counter criticisms from the left that it is too closely aligned with the GOP. A month ago, AIPAC advertised for a director of progressive outreach; the job is not yet filled. Until the mid-1980s, such a job description might have seemed redundant — AIPAC was until then strongly identified with Democrats.

That traditional base is aging, however, and many liberal activists are expressing greater sympathy for the Palestinians. Within the Jewish community and in Washington, J Street has challenged AIPAC from the left. AIPAC’s leadership has recently sought avenues to younger progressives, and nods to the political left were visible throughout the conference.

At a session on “America’s Role in a Changing World,” Brian Katulis, a senior fellow at the liberal Center for American Progress, vigorously — and politely — sparred with Michael Doran, an official in the administration of President George W. Bush now at the Brookings Institution. But Katulis first flattered the room, and in progressive terms, praising AIPAC for seeding American engagement overseas at a time, he said, when conservatives were disengaging from foreign involvement.

“What AIPAC does to reach out to our citizenry to talk about our engagement with our key ally Israel is vital,” he said.

A breakout session on “Civilian Coexistence” in Israel featured an entire panel identified with the Israeli left, which organizers acknowledged was unusual for AIPAC.

The room of about 100 people was warm and welcoming. Ali Waked, an Arab Israeli who heads Merchavim, a dialogue group, drew applause when he said, “I want to be a first-class citizen of the state of Israel, with keeping my Arab and Palestinian identity.”

He discussed discrimination against Arabs in Israel. “When 20-25 percent of citizens are uncomfortable, it should be a warning,” he said. No one contradicted him; instead, there were vigorous nods.

A video during one of the conference breaks touted a project of the Peres Center for Peace that brings together Israeli and Palestinian girls in soccer tournaments. It wasn’t an extraordinary clip, but the montage of a Palestinian teenager doing her homework, hanging out with friends and her parents, and playing soccer presented a picture of Palestinian life that has been rare at AIPAC conferences.

Rabbi Rick Jacobs, the president of the Union for Reform Judaism (URJ), joined his counterparts in the Conservative and Orthodox movement on stage during the Monday plenary to cite Torah readings calling for support for Israel.

It was Jacobs’ first onstage appearance at AIPAC since he assumed the URJ’s presidency three years ago; his appointment to lead the Reform movement drew some criticism from the right at the time in part because he had been a member of J Street’s rabbinic cabinet.

“We stand together to acknowledge that Jewish life is not about singing in unison but rather singing in harmony,” Wernick said.