From the Archive: An overdue correction

Lt. Harvey Kaufman, won 10 air medals for his WWII service as a bombardier.

Seventy years later, Harvey called JTA with a correction: Someone else shot down those planes.

How did Harvey find us?

His daughter, Melinda, Googled his name and read our 1944 article to him. Melinda read it aloud to her father; he was livid and “very disturbed.”

“I told him not to worry” Melinda recalled. “How many people are going to read an article from 1944? But he kept saying, ‘It’s the principle of the matter.’”

During an hour-long phone conversation with JTA in June of last year, Harvey Kaufman described in vivid detail all of the various people and functions on the plane.

Convinced that he was of sound mind and not just being humble, JTA appended a correction to his story: 70 years after the fact.

Harvey Kaufman passed away on Jan. 24 at the age of 93. Despite the correction, his record as an accomplished pilot is unquestionable. The same goes for JTA’s commitment to preserving the record of Jewish history.

If you believe that real stories from the past deserve a place in today’s media landscape, please consider a gift to the JTA Archive campaign. 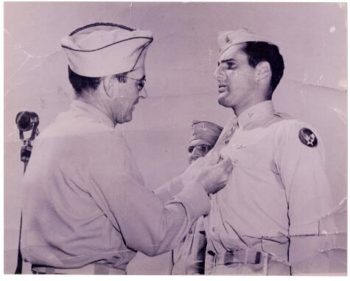