French Jews say Prime Minister Manuel Valls has their back 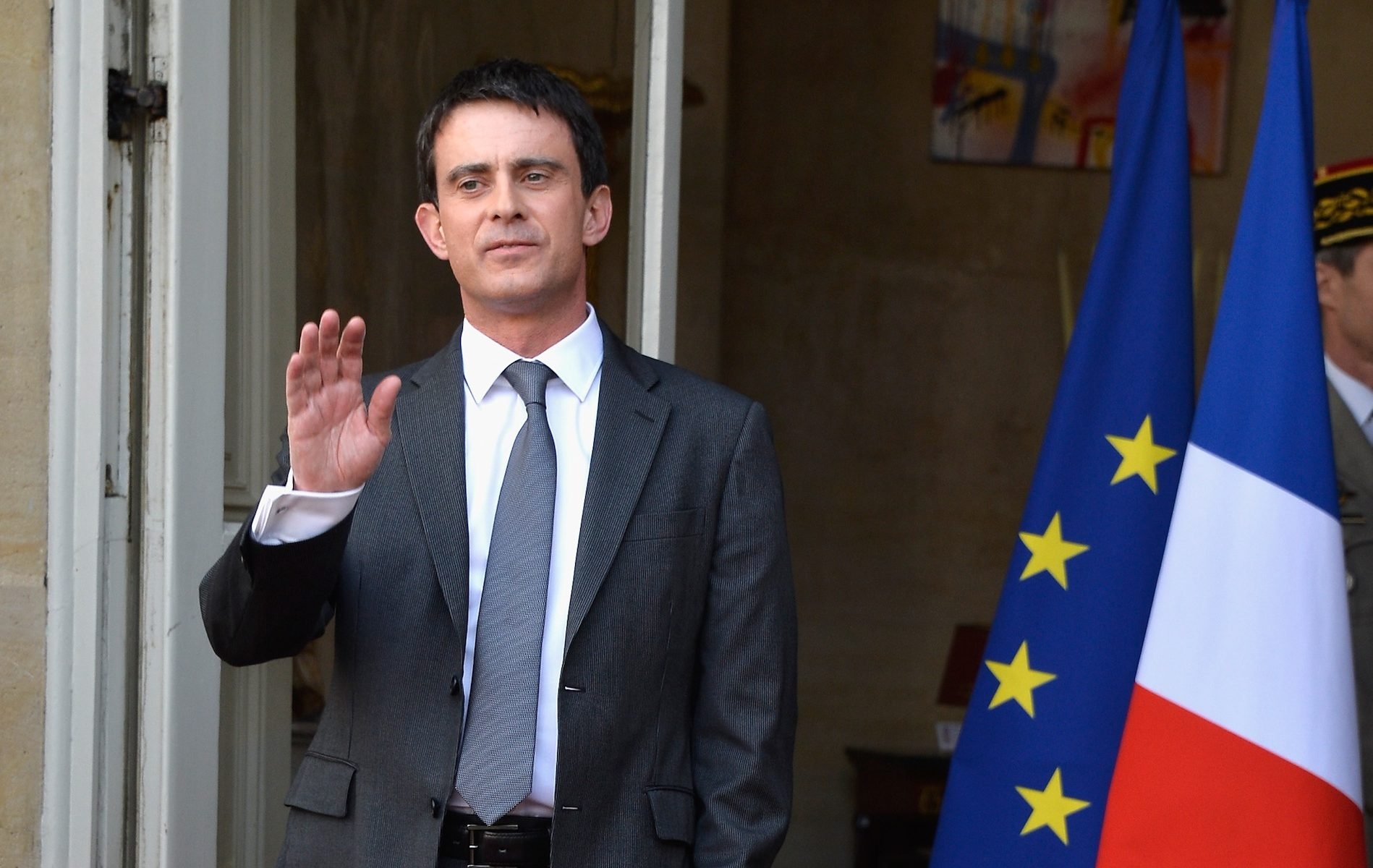 Manuel Valls at the ceremony April 1 in which he assumed the power of the French Prime Minister. (Pascal Le Segretain/Getty Images)
Advertisement

(JTA) — Even among those who anticipated it, the intensity of anti-Semitic violence that hit France in 2002 was shocking.

That year — the height of the second Palestinian intifada — synagogues and schools were torched, previously rare anti-Semitic beatings occurred in Paris and elsewhere, and a new generation of Jews were introduced to dangers their grandparents recognized from the 1930s.

So when teenagers started throwing stones at Jews walking to synagogue in Evry, Manuel Valls, then the mayor of the Paris suburb, did more than issue a condemnatory news release. Valls, who became prime minister last week, joined the weekly synagogue walk, signaling to the perpetrators and anyone who cared to look that the Jews had a powerful ally.

“There is a new reality for French Jews,” Valls said years later, describing the atmosphere in 2002. “And it is palpable to me.”

Valls’ promotion last week from interior minister owed less to this kind of dramatic gesture on anti-Semitism and more to his reputation as an energetic and reform-minded politician, assets that have helped him rise to become France’s second-most powerful politician in the shakeup that followed his Socialist Party’s defeat in local elections last month.

But to many French Jews, Valls is something of a hero for his unusually robust defense of Israel and the French Jewish community, and his elevation is seen as a reassuring sign amid one of French Jewry’s most troublesome periods.

“I don’t think we ever knew a minister who said things the way he says them,” Roger Cukierman, president of the CRIF umbrella group of French Jewish communities, told JTA last week.

Cukierman was referring specifically to a speech last month by Valls at a rally marking the two-year anniversary of the slaying of four Jews in Toulouse in which Valls said that anti-Zionism is anti-Semitism. But Cukierman could have had in mind any of several explicit displays of Jewish solidarity that Valls has undertaken over the years.

As interior minister, Valls led an uncompromising assault on the comedian Dieudonne M’bala M’bala, who created a quasi-Nazi salute known as the quenelle that Valls has described as “an anti-Semitic gesture of hate.” And Valls has been filmed wearing a yarmulke at numerous Jewish community functions, exposing him to charges of hypocrisy since he supported banning Muslim head coverings for women at French universities. 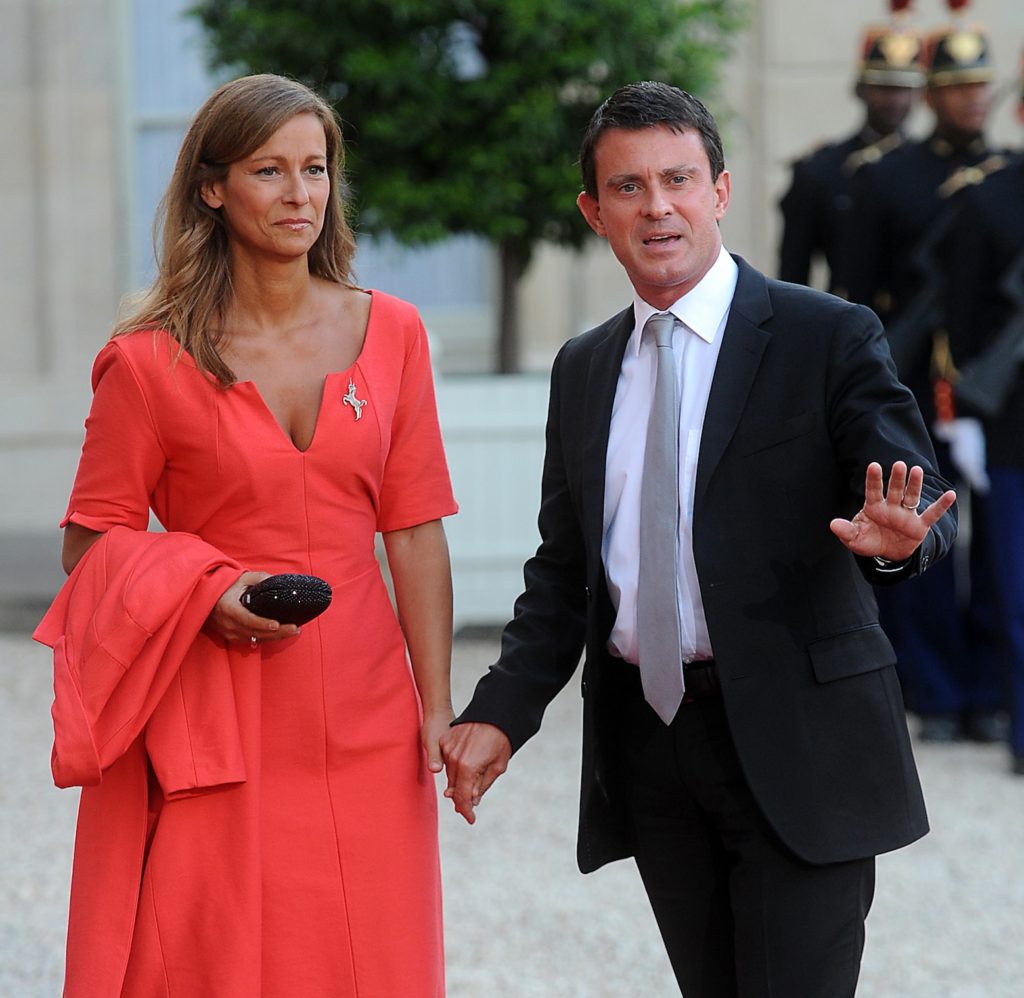 Manuel Valls, then the interior minister of France, arriving at a state dinner with his wife, Anne Gravoin, Sept. 3, 2013. (Antoine Antoniol/Getty Images)

Even more unusual, Valls has explicitly linked his pro-Jewish views to his Jewish wife, the violinist Anne Gravoin, saying in 2011 that his marriage connected him “in an eternal way” to Israel and the Jewish people.

“Without Jews,” Valls said last month, “France will no longer be France.”

Such statements are highly unusual in a country with a strong secularist ideology and where government officials are typically careful not to single out any minority or group for special treatment. But Valls is not a typical politician.

Born in Barcelona to a family of Catalan intellectuals, Valls moved to Paris in his teens, where he studied history and began his political career as president of a Socialist student union. Many French political analysts attribute Valls’ departures from the conventions of French politics to the fact that he is not a native of France.

“Through his life story and his upbringing by a Spanish anti-fascist family, Valls has a lot of points in common with the story of the Jewish community,” said Michel Zerbib, the news director at Radio J, the French Jewish station.

Valls and Gravoin wed in 2010, the second marriage for Valls. The couple’s Paris wedding reception was, according to a report in Elle magazine, a “happy mix of men wearing kippas from Manhattan and Paris, and [local] imams.”

Valls’ good looks and his very public marriage — the couple have been photographed repeatedly exchanging affections — have not hurt his appeal to female voters, hundreds of whom voted him France’s sexiest politician in a survey by the IFOP polling company. Two-thirds of those surveyed said they would consider having an affair with him, a possibility Valls brushed off, saying, “OK, but I am [already] in love.”

In a 2011 campaign speech before a Jewish audience in Paris, Valls invoked his wife to demonstrate his credentials as a defender of the Jewish community.

“So please,” Valls said, showing some of his trademark oratory passion. “I didn’t come here to get tips on how to fight anti-Semitism!”

In January, Valls lobbied mayors to ban a new tour by Dieudonne, who has been convicted multiple times for inciting hatred against Jews, leading to its eventual cancellation. Valls also has sparked an unrelenting financial investigation of Dieudonne that could land the comedian behind bars for years.

All this has not been cost-free for Valls. The battle with Dieudonne alienated many voters, some of whom admire the comedian for his defiance. Polls conducted immediately after Valls’ move to ban the tour saw him losing 5 to 8 percentage points from his earlier 60 percent approval rate.

Nicolas Anelka, a star athlete who was fired recently by a British soccer team for performing the quenelle, said this month that Valls’ campaign was launched at his wife’s urging. Less reserved critics, including several extremist Muslim preachers and right-wing conspiracy theorists, have taken to calling him “Valls the Jew.”

Yet despite his pro-Jewish credentials and the price he has paid for them, Valls has faced distrust from Jewish supporters of the centrist UMP party and its former president, Nicolas Sarkozy, who feared Sarkozy’s tough stance on anti-Semitism and his pro-Israel rhetoric would crumble under the Socialists.

Sarkozy was the clear favorite among Jews in the 2012 presidential election. But two years after Sarkozy lost to Francois Hollande, many Jews agree that Valls has made good on his pledge to follow Sarkozy’s lead in confronting Islamist fanaticism and anti-Semitism in the growing ranks of the far right.

“We are fortunate,” Cukierman said, “to have a leadership that is perfectly attentive to the community’s needs.”