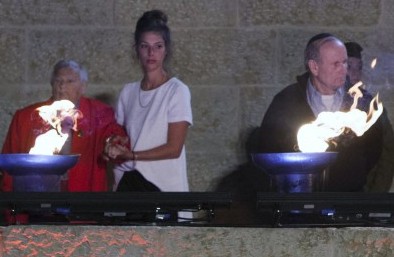 Some of the six Holocaust survivors representing the 6 million Jewish victims of the Nazis lighting torches in the victims' memories at a Yom Hashoah ceremony at Yad Vashem in Jerusalem, April 27, 2014. (Yonatan Sindel/Flash90)
Advertisement

Some of the six Holocaust survivors representing the 6 million Jewish victims of the Nazis lighting torches in the victims’ memories at a Yom Hashoah ceremony at Yad Vashem in Jerusalem, April 27, 2014. (Yonatan Sindel/Flash90)

JERUSALEM (JTA) — Israel is “the only possible memorial standing” for the victims of the Holocaust, Israeli President Shimon Peres said.

“Israel is deterrence against any attempt at another Holocaust,” he said during a ceremony Sunday night at Yad Vashem at the start of Israel’s 24-hour observance of Holocaust Remembrance Day, or Yom Hashoah.

“A strong Israel is our response to the horrors of anti-Semitism, but it does not excuse the rest of the world from its responsibility to prevent this disease from returning to their own homes,” Peres said.

The theme of this year’s remembrance is”1944: From Extermination to Liberation.”

Some of the six Holocaust survivors representing the 6 million Jewish victims of the Nazis lighting torches in the victims’ memories at a Yom Hashoah ceremony at Yad Vashem in Jerusalem, April 27, 2014.

the ceremony after telling their stories in a prerecorded video.

The ceremony was broadcast on all Israeli television channels and on several radio stations. On Yom Hashoah in Israel, places of entertainment are closed and Holocaust themed-movies and documentaries are shown on television channels. Memorial ceremonies are held throughout the country.

Following a two-minute siren on Monday morning, a national wreath-laying ceremony will be held at Warsaw Ghetto Square in Yad Vashem and the names of Holocaust victims will be read out over the following hours.

The B’nai B’rith World Center in Jerusalem and Keren Kayemeth LeIsrael on Monday morning will honor Jews who rescued fellow Jews during the Holocaust. During the ceremony, a Jewish Rescuers Citation will be conferred by the Committee to Recognize the Heroism of Jewish Rescuers During the Holocaust and the B’nai B’rith World Center on seven rescuers or their descendents.

Also in honor of Holocaust Remembrance Day, the Israel Electric Corp. and Yad Vashem have launched a project to document the stories of Holocaust survivors who once worked for the company.

“Hundreds of IEC retirees who survived the horrors of the Holocaust took part in establishing the utility and infrastructure development of the state of Israel,” IEC Chairman Yiftah Ron-Tal said in a statement. “As a national company, it is a moral obligation to act with all the means at our disposal to strengthen the memory of the Holocaust and collective memory, which unites us as a society.”

International Holocaust Remembrance Day is marked worldwide on Jan. 27, the date of the liberation of the Auschwitz death camp. Israel’s annual Holocaust memorial day coincides with the Hebrew date of the Warsaw Ghetto uprising.