Geert Wilders and Dutch Jews — end of the affair? 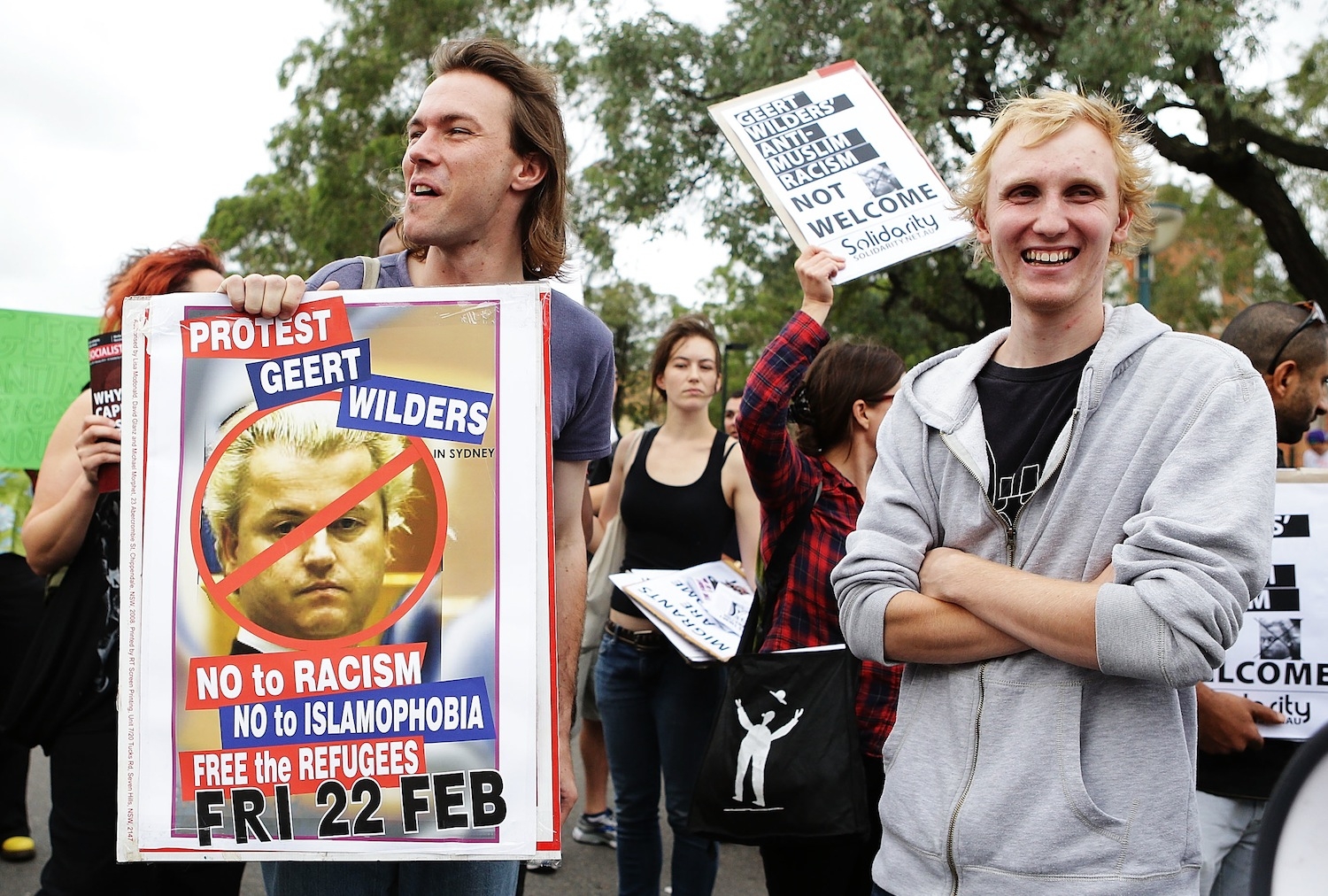 THE HAGUE, Netherlands (JTA) — Standing in front of a giant flag, a tall blond politician asks his excited followers whether their country should have greater or fewer Moroccans.

When they are done chanting “fewer,” the speaker, Geert Wilders of the far-right Dutch Party for Freedom, promises his listeners that he will “take care of it.”

Wilders was speaking at an event here to celebrate his party’s strong showing in March 19 local elections, and he chuckled as supporters cheered his pledge.

A fierce critic of Islam who has compared the Koran to “Mein Kampf” and called the Prophet Muhammad the devil, Wilders had steered clear of slurring specific Muslim communities, instead peddling a unique brand of populist conservatism that eschewed the kind of Nazi-inflected, anti-Jewish rhetoric popular among far-right groups elsewhere in Europe.

But his “fewer Moroccans” comment has generated a furious backlash because it was seen as the first time he had engaged in open racism that targeted an entire group as undesirable by definition. The statement has cost him much of the sympathy he enjoyed in some quarters of the Dutch Jewish community and blurred the lines that had separated him from other European far-right leaders.

“This is different from his past statements,” the pro-Israel journalist Ratna Pele wrote on the website RepubliekAllochtonie.nl. “Before it was about Islam or Moroccan criminals, now it’s about the entire group that he says is unacceptable and needs to get out of the country.”

Dutch Jews never voted en masse for the Party for Freedom, though Wilders’ strident support for Israel and anti-Islamist posture did make him a star among certain Jewish constituencies, in Holland and abroad. But the statement on Moroccans has been seen as a final straw in a gradual estrangement that began in 2011, when the Party for Freedom was key to the Dutch parliament’s adoption of a ban on ritual slaughter — a measure reversed in 2012 by the senate only after vigorous lobbying by Jewish groups.

Wilders’ decision to cooperate with France’s National Front and Austria’s FPO — parties long viewed as Nazi-sympathizing by the Jewish community — also was seen as a reversal of an earlier pledge not to band with anti-Semitic parties or politicians. Wilders and the National Front’s Marine Le Pen have agreed to form an anti-European Union bloc in Brussels after the May 22 European Parliament elections.

“Wilders used the Dutch Jewish community for his political needs domestically and then stabbed them in the back repeatedly now that they are of no use to him as he sets his sights on international politics,” Wim Kortenoeven, a former Party of Freedom lawmaker who resigned in 2012, told JTA.

Statements from Dutch Jewish groups confirmed the community’s widespread outrage. CJO, the umbrella group of Dutch Jewish communities, released a statement that spoke of the group’s “horror” at Wilders’ comments about Moroccans. Summing up the general sentiment, the Dutch Jewish weekly NIW last month averred, “Dutch Jewry is fed up with Geert Wilders.”

Wilders’ association with the Jewish community has roots in his youth, when he volunteered for a year at Moshav Tomer in the West Bank. He repeatedly has referred to Jews as role models for Europe and been a vociferous supporter of Israel.

Last year, during a speech in Los Angeles before the American Freedom Alliance, he called for the relocation of embassies in Israel from Tel Aviv to Jerusalem.

“Let us fly the flags of all the free and proud nations of the world over embassies in Jerusalem, the only true capital of Israel and the cradle of our Judeo-Christian civilization,” Wilders said.

Such unabashed pro-Israel rhetoric meant that Wilders could count on some Jewish support even as he tested the boundaries of free speech with rhetoric many considered xenophobic. In 2010, the year his party won 24 seats out of 150 in parliament, Wilders placed Kortenoeven, a former researcher for the pro-Israel group CIDI, on the party ticket. Within two years, Kortenoeven was gone, citing leadership issues and the party’s support for the ritual slaughter ban. In 2012, Kortenoeven traveled to the United States to warn Jewish leaders against supporting Wilders.

Kortenoeven recalled a tense meeting with Wilders in 2011 in which he warned Wilders that he was “entering a collision course with the Jewish community that would ultimately force him to also oppose ritual circumcision.” Kortenoeven said Wilders was nervous and chain smoking during the meeting, but claimed he could not oppose the ban because it had already become party policy.

Wilders did not respond to requests for a interview. A party spokesman, Michael Heemels, said the allegations by Kortenoeven were “total nonsense.”

Wilders still has supporters in the Jewish community. Gidi Markuszower, who Wilders once endorsed as a parliamentary candidate, said the Moroccan comment had nothing to do with race, but only with immigration quotas “that would per se reduce the number of Moroccans.” Markuszower also said that Wilders’ alliance with other far-right groups was aimed at curtailing the EU and was “born out of necessity.”

But elsewhere, Wilders’ turn has proven costly. Four Party of Freedom lawmakers — two in the Dutch parliament and another two in the European Parliament — resigned in protest over the Moroccans comment and hundreds of citizens filed police complaints alleging incitement to hatred.

Yet Wilders has not backed down, bolstering his position with crime statistics suggesting that Moroccans are frequent law breakers — statements that generated even more furious reactions from the Dutch Jewish community.

“Even Wilders’ support for Israel — the basis of the support he used to receive from Dutch Jews — is counterproductive,” Kortenoeven said, “because anything he touches is tainted.”