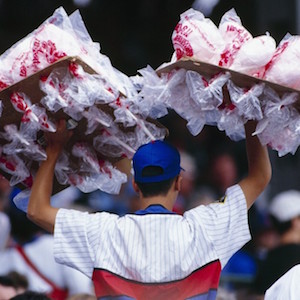 (JTA) — Longtime fans of the Chicago Cubs know there are a few mainstays they can expect when they visit Wrigley Field: ivy on the outfield walls, a strict no-wave policy rigorously enforced by fans and, most days, disappointing play by the hometown team.

But there’s one little-known quirk at Wrigley that appears to be fading away as the ballpark, which celebrated its 100th anniversary last week, enters its second century: the numerous Orthodox Jewish vendors who sell food and drinks in the stands.

A few subtle signs could give them away: a stray tzitzit strand flapping out of a jersey, a name tag reading Simcha, the mincha prayer minyan that used to take place in the outfield stands before or after games.

No one seems to know quite how it began, but for decades Wrigley Field vending was a redoubt of Orthodox Jews, most of them teenagers or early 20-somethings, and almost all of them men.

“I went to high school at Ida Crown Jewish Academy, and it was just like a rite of passage there,” said Jon Blumberg, 41, an investment fund manager who vended for five or six summers beginning in 1989. “Once you were at the age where you no longer were going to camp or didn’t want to be a counselor, it was just what guys did.”

Twenty years ago, it wasn’t unusual to have upward of 25 Orthodox Jewish vendors working the stands at Wrigley, selling everything from beer to peanuts.

It was seen as an ideal summer job for observant teenagers. The ballpark is a short ride from Chicago’s Orthodox neighborhoods, it wasn’t too onerous to join the union required to vend, you could make a decent amount of money in just four hours’ work, and vendors could choose when they wanted to work and when they didn’t — perfect both for Sabbath observers and teens uninterested in committing to a regular job.

Plus, there was the baseball.

“This was a dream come true,” said David Porush, 40, a lawyer who vended for a couple of years starting at age 16. “I’m a huge Cubs fan. I love baseball. I love Wrigley Field. If you were a very big fan like me, I’d make $30 or $40 and then sit down to watch the game. But if you were a very aggressive vendor, you could make a lot of money.”

Danny Altschul, now a partner at the accounting firm McGladrey, credits his five years of vending with helping pay for his wedding and the down payment on his house in the Chicago neighborhood of West Rogers Park.

“For those few hours you were out there it wasn’t the time to be lazy,” said Altschul, who could make up to $300 on a good day. “You work hard, try to work swiftly and take advantage of an opportunity when you’re in a commission-based business. It helped me pay for college.”

Like many of the vendors, Altschul also hawked wares at Chicago’s other sports arenas. He remembers fondly the day he managed to sell 31 loads of pop (Midwest parlance for soda) at a Cubs-Astros day game and then headed downtown to Comiskey Park to work a White Sox night game.

Porush says he wanted to vend ever since he was a little kid, when he’d watch Orthodox vendors at Wrigley slip free beer, ice cream and peanuts to his father, a teacher at the Hillel Torah North Suburban Day School. The vendors were former students.

David Landsman, an accountant who now lives in New Jersey, used to cut school to vend on Opening Day and used a similar tactic to avoid trouble when spotting a school official in the stands.

“In Chicago, everyone would play hooky on Opening Day,” Landsman recalled. “As long as I gave the assistant principal something from what I was selling, it was fine.”

In recent years, the stream of young Orthodox Jewish vendors has slowed to a trickle. Seniors at the two Orthodox high schools that served as the main feeders — Ida Crown and Skokie Yeshiva — told JTA through an administrator that students aren’t becoming vendors anymore. Vending isn’t as lucrative as it once was, the rising number of night games makes the job less suitable for teens and the setting isn’t that compelling to young people.

“My kids, they don’t get it,” Blumberg said. “They don’t understand why you’d ever go to a Cubs game because they’re so pathetic. The ones who want to go say they want to go to the Sox.”

The Cubs last won a World Series title in 1908 and haven’t had a winning record since 2009.

The number of young Orthodox Jewish vendors at Wrigley has shrunk to just four or five, plus about an equal number of older full-timers, according to Joe Bulgatz, an Orthodox Jew in his 50s who has been vending at Wrigley and other sports venues in Chicago since 2004.

“Between the Cubs’ performance and the economy, a lot of people are just saying, ‘Hey, it’s not worth it,’ ” he said.

Bulgatz juggles his hours working in the credit department of a cable distributor so he can supplement his income by vending at Wrigley and venues such as U.S. Cellular Field, the United Center and Soldier Field. His modus operandi, he says, is to “provide the best quality service possible and make a connection with the fans, and make a kiddush Hashem at the same time.”

If he sees fellow Orthodox Jews, Bulgatz often drops a hint to let them know he’s a member of the tribe — informing them, for example, that the hot chocolate is kosher-certified.

Orthodox Jews have a few unique restrictions when it comes to vending. They can’t work on Shabbat or Jewish holy days, which cuts out about a quarter of the games. On Passover, they may not handle beer — often the most lucrative product — because it’s hametz, or leavened. And many won’t sell hot dogs for fear of unwittingly selling non-kosher meat to a Jew.

Years back, when the hot dog buns apparently carried dairy ingredients, Orthodox vendors often debated whether selling franks violated the Jewish law prohibiting profiting from the sale of food that mixes meat and dairy, even if the meat isn’t kosher.

Rabbi Sholem Fishbane, kashrut administrator at the Chicago Rabbinical Council, says he fielded this question from a vendor’s mother not long ago. The prohibition, he says, applies only to foods in which the dairy and meat have been cooked together, so ballpark franks are OK (as long as you’re not selling them to a Jew).

As the kosher certification agency for the kosher food stands at the United Center, the rabbinical council maintains an onsite mashgiach, or kosher supervisor, at Bulls (NBA) and Black Hawks (NHL) home games. Wrigley has no exclusively kosher concessions — a subject of some consternation among Orthodox fans. A call to United Center’s kosher concessionaire, Kosher Sports Inc., was not returned.

With so many God-fearing Jews vending — and sometimes praying — at Wrigley, the Cubs’ dismal performance might seem like a challenge of faith.

Porush says he doesn’t see it that way.

“I’d like to think we’re getting our reward in the next world,” he said. “I’ve seen lots of heartache as a Cubs fan, and I think it is parallel to being a God-fearing Jew. We live through difficult times and all we can say is, ‘Next year in Jerusalem.’ A Cubs fan is always saying, ‘Wait till next year.’ That’s who we are.”

So what will happen first — the coming of the Messiah or a Cubs World Series title?

“I really hope Moshiach comes first,” Porush said, “because the Cubs aren’t going to be a contender for at least another two years.”