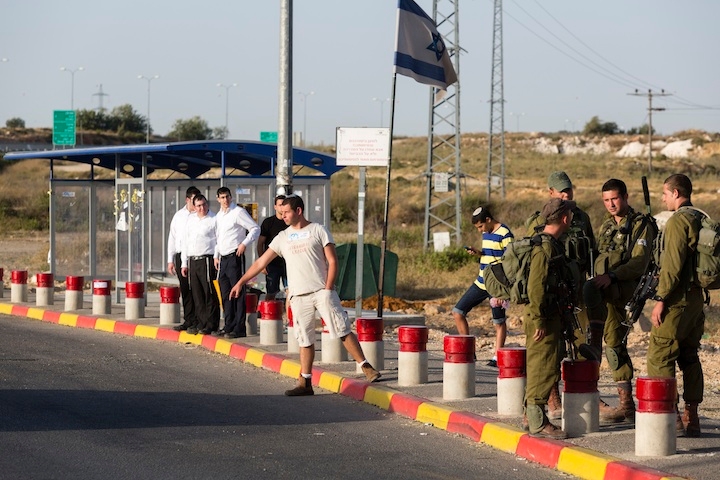 Israeli soldiers guard near where Jewish settlers hitchhike at the Gush Etzion junction in the West Bank, June 16, 2014. (FLASH90)
Advertisement

EFRAT, West Bank (JTA) — At a shopping center in the middle of Efrat, families eat pizza, a deliveryman unloads a cart and a barista serves coffee. On a passing bus, a banner reads “Gush Etzion — an Israeli home.”

In many respects it’s a normal, quiet Monday in this settlement that has grown into a large commuter suburb for Jerusalem.

At a nearby intersection, though, the calm feels absent. Israeli soldiers patrol the crossroads, and a curb usually crowded with hitchhikers looking for a ride is empty.

The June 12 kidnapping of Israeli teens Gilad Shaar, Eyal Yifrach and Naftali Frenkel while they were hitchhiking from the area has upset life in the Etzion settlement bloc, or Gush Etzion, south of Jerusalem.

During the past week, Israeli residents say, life has felt more tense and their communities less secure. For a week following the kidnapping, Palestinians living in the area who work in Israel were unable to get to their jobs.

“I feel scared that there’s no security,” said Tali Ardani, 32, a supermarket employee in Efrat. “I didn’t feel like that before. I used to hitchhike at that very intersection.”

As West Bank settlements go, Gush Etzion — with Efrat at its center — is about as mainstream Israeli as it gets. The Gush Etzion area southwest of Jerusalem and Bethlehem includes 20 Israeli settlements and about 70,000 Israeli residents living among about 18,000 Palestinians.

Shortly after Israel conquered the West Bank in the 1967 Six-Day War, settlements were established in the area. Some of the first residents were the children of Jews massacred after the Kfar Etzion settlement was seized by Arab forces during Israel’s War of Independence in 1948.

The settlement bloc has since become a collection of Jerusalem suburbs. It is widely expected to remain part of Israel under any peace deal.

Opponents of a Palestinian state also recognize the Israeli national consensus on the area’s future as part of Israel. In his proposal to annex vast swaths of the West Bank, Israeli Economy Minister Naftali Bennett has lobbied to start with Gush Etzion.

But the kidnapping of the teens has served as a harsh reminder to Efrat residents that they live in a conflict zone. Locals say that since the kidnapping, the number of residents trying to hitchhike here has dropped dramatically.

Yitzchak Glick, a U.S. native who moved here in 1974, said the atmosphere reminds him of the mood during the Second Intifada a decade ago, when attacks here were common and “we were afraid to drive on the road at night.”

“There’s a lot of tension in the air,” he said. “There are ups and downs. The atmosphere in Efrat was horrific.”

The director of Efrat’s local government council, Yehuda Schweiger, said that while residents are more cautious and on edge now, they’re trying to regain a sense of normalcy.

“We don’t want to go back to Defensive Shield,” he said, referring to the Israeli army’s extensive West Bank 2002 operation to combat terrorism during the Second Intifada. “We trust the army.”

Palestinian residents also said they want to return to a calm life. But the ongoing Israeli military operation to find the teens and punish their kidnappers has left five Palestinians dead, entailed widespread searches in Palestinian homes and for a week closed the border to Palestinians with Israeli work permits, leaving them without a paycheck.

“It’s a lot of changes,” said Fatima, a Palestinian doctor who declined to give her last name. “The army has been around here. People don’t have money because they haven’t been working.”

But Israelis and Palestinians still do business together here, sometimes shopping at the same stores and working together in a large budget supermarket. Glick, a physician, takes pride in his frequent visits to patients in Palestinian towns, and several Palestinian families welcomed him enthusiastically as he made house calls Monday.

In general, he said, Israelis have become more guarded in their relations with Palestinians since the kidnapping.

“There’s no question that when we encounter terror, it’s a tremendous setback for the feeling of coexistence,” he said. “When there are terror attacks, these voices are muffled by voices saying that we shouldn’t have Palestinians in our towns.”

Israelis have come together in prayer and concern for the boys’ safe return. Still, the kidnapping has spurred debates about Israel’s occupation of the West Bank, the nature of Israel’s military operation and the potential for peace with Palestinians.

But local resident Tehila Elitzur said the problem on which she has focused since the kidnappings is not the Israeli-Palestinian conflict. Rather it is Israel’s duty to provide transit services to its citizens so they will not need to hitchhike.

“What’s happening here is in every far-off place” in Israel, said Elitzur, who lives in the Gush Etzion settlement of Elazar. “You don’t have good public transit. We need more.”