After unity and then calls for revenge, Israelis look inward for answers 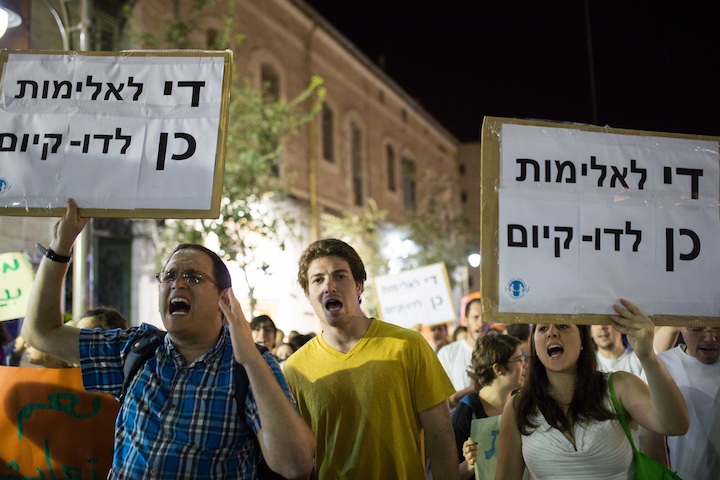 WASHINGTON (JTA) — For many Israelis, eyes are turning south watching yet another conflict unfold with Hamas. Yet thoughts are also turned inward, contemplating the sense of national solidarity occasioned by the abduction and murder of three teenagers and then shattered by the murder of a fourth.

The Israeli media — the social and conventional varieties — have exploded in recent days with recrimination and self-recrimination over the brutal murder of Muhammad Abu Khdeir, the Palestinian teenager from eastern Jerusalem who was burned alive last week. The killing was apparent retaliation for the murders of three Israeli teens — Naftali Fraenkel, Gilad Shaar and Eyal Yifrach — who were kidnapped while hitchhiking.

“A national struggle does not justify acts of terror,” the outgoing and incoming Israeli presidents, Shimon Peres and Reuven Rivlin, wrote Monday in a joint Op-Ed for the Israeli daily Yediot Acharonot.

Israeli police said three Jewish youths have confessed to the Khdeir murder and three others are in custody.

Leeat Granek, a grief specialist at Ben-Gurion University’s public health department, said public displays of grief can be used to bring nations together as well as to stoke rage. In the wake of the murder of the three Israelis, both phenomena were evident in the rallying around the parents of the murdered teenagers and then in the calls for revenge.

Yoaz Hendel, a former director of public diplomacy in Prime Minister Benjamin Netanyahu’s office who now heads the right-wing Institute for Zionist Strategies think tank, wrote a widely discussed Facebook post in the immediate aftermath of Khdeir’s murder, before any suspects had been apprehended. In the posting, Hendel railed against Jewish rioters inflamed by the killings of the Israeli teens who had attacked Arabs in downtown Jerusalem.

“It is unbelievable how a few hundred racist Jews can cause so much damage to an entire country,” Hendel wrote in Hebrew. “The results of the investigation into the death of the boy are already unimportant. After pictures of the mob shouting ‘Death to Arabs,’ the damage is done.”

“It’s our obligation to do ‘heshbon nefesh,’ ” Hendel said, using the Hebrew term for soul searching, “so we don’t let pass this phenomenon that we have racist Jews here acting like the Ku Klux Klan, not the Zionist dream.”

Elizabeth Tsurkov, a left-wing Israeli writer and activist, blamed politicians for stoking the flames with the rhetoric of revenge. She pointed to Netanyahu’s June 30 statement announcing the discovery of the bodies of the three kidnapped teens that quoted a poem by Hayyim Nachman Bialik written after a pogrom.

“It’s clear how this kind of rhetoric justifies attacking people who are not involved in combat,” she said.

But Hendel rejected assertions that the broader Israeli society was guilty, noting the condemnations of Khdeir’s murder from across the political spectrum.

Hendel has had pushback from some online commenters who objected to his condemnations of anti-Arab violence. In a follow-up posted July 4, he addressed a commenter who had told Hendel, “You are not my brother, and we do not belong to the same people.”

“Believe me, I wish it were so,” Hendel replied. “I’m stuck with you.”