8 things you need to know about the Gaza-Israel conflict 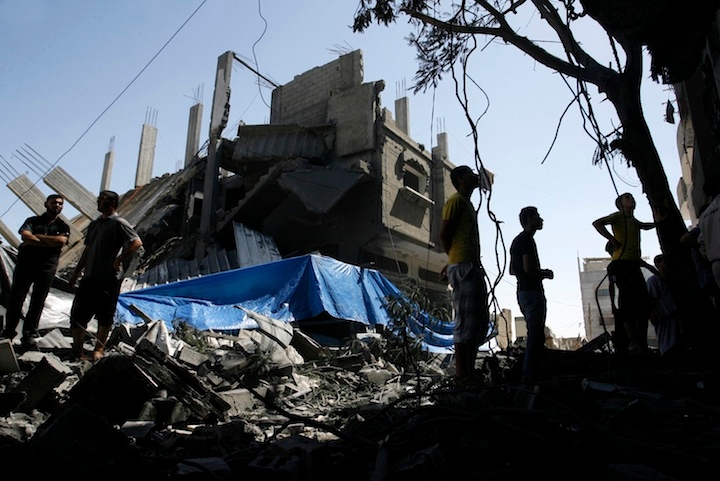 (JTA) — Israel and Hamas are fighting their third major conflict in six years, and while some things have stayed the same, the battle lines have also shifted in a few notable ways. Here are eight things you need to know about the current conflagration:

• Iron Dome has been a game changer: The U.S.-funded Israeli anti-missile system was operational during the last conflagration, in November 2012, but its remarkable success rate this go-around has reduced Gaza’s missiles to more of an irritant than a deadly threat for Israel — so far.

In the eight-day conflict of 2012, Gaza fired some 1,500 rockets into Israel and killed six Israelis, five of them from rocket fire. In the three-week war of 2008-09, 750 rockets were fired into Israel, killing three (another 10 Israelis were killed in fighting). By comparison, more than 1,100 rockets have been fired toward Israel this time and thus far there’s only been one Israeli death — and by mortar fire at a border area, not a rocket attack.

While one missed rocket can make things drastically worse, the success of Iron Dome has bought Israel time to carry out its Gaza operation without overwhelming domestic pressure for either a cease-fire or an escalation.

• Iron Dome’s success is bad for Israeli PR: It’s a paradox of Israel’s able defenses that media coverage of this conflict has focused overwhelmingly on Palestinian suffering in Gaza, prompting complaints from some supporters of Israel. But in the absence of Israeli deaths, Gaza is where the story is. The scenes of devastation there, the tales of human loss and the Palestinian death toll are much more compelling for most viewers and readers than images of Israelis hunkering down in bomb shelters, taking cover in shopping malls or peeking into a hole in the ground where a rocket landed.

But Israelis would rather suffer bad PR than battlefield losses.

• Israel does not want a full-scale war: Israel’s quick embrace of an Egyptian-proposed cease-fire early Tuesday was a sign of its reticence to launch a ground invasion of Gaza and turn this into a full-scale war — despite calls from some hawkish Israeli Cabinet members to deal Hamas a death blow.

Israel would love to eliminate Hamas, but it doesn’t seem able to do so. Despite some limited success, after every conflagration Hamas has managed to rearm and improve its rocket capacity, as evident in the rocket range on display in this round of fighting. Another ground operation likely would result in greater loss of lives on the Israeli side and worse carnage in Gaza.

The Israeli government wants this over quickly because the longer it lasts, the greater the chances an errant Israeli strike causes mass Palestinian civilian deaths or a Palestinian rocket manages to penetrate Israel’s defenses and cause significant Israeli casualties.

• Israel and Hamas are at a stalemate: On the defensive front, this confrontation has been a big win for Israel: Iron Dome has managed to render Hamas’ rockets mostly impotent, and the Israeli army foiled an attempt by Hamas attackers to infiltrate Israel via sea. The’re been just one Israeli death so far — from mortar fire at the Erez border crossing where Israel and Gaza meet.

On the offensive front, however, Israel hasn’t managed to curtail the rocket fire, kill the top leaders of Hamas or significantly disable its fighting capabilities. Hawks argue that Israel could accomplish those goals if it launched a full-fledged war, but Prime Minister Benjamin Netanyahu either doesn’t agree or is unwilling to pay the price in Israeli lives or Palestinian collateral damage.

For Hamas, which started off the war severely weakened politically, the battle has been an opportunity to demonstrate the improved range of its rockets and reassert its position as the Palestinian faction willing and able to take on Israel. But Hamas’ inability to inflict any significant damage on Israel or protect Gaza from Israeli assault is not good for its reputation.

• Hamas’ Egyptian lifeline is dead: If it wasn’t clear before Egypt’s cease-fire proposal, it certainly is now: Hamas has no friend in Egypt. The proposal did not include any of the Hamas leaders’ demands, highlighting the stark changes in the Egypt-Hamas relationship since Hamas’ 2012 confrontation with Israel.

When the Muslim Brotherhood’s Mohamed Morsi was elected Egyptian president in June 2012, Hamas rulers in Gaza gained a powerful ally in their neighbor to the south (Hamas is affiliated with the Brotherhood). Trade and arms trafficking in the tunnels linking Gaza and Egypt increased, and with the blockade of Gaza breached, Egypt’s Sinai Peninsula became a staging ground for attacks against Israel.

That’s over now. Egyptian President Abdul Fattah al-Sisi treats Hamas with the same disdain and antagonism he has for the Muslim Brotherhood, and he has choked off Hamas’ access point at the Egypt-Gaza border.

And in today’s Egypt, where intimidated press outlets take their cues from the government, Egyptian media have followed suit. A clip of excerpts from Egyptian TV programs taken July 9-12 and compiled by the Middle East Media Research Institute shows Egyptian commentators and anchors slamming Hamas.

“We are not prepared to sacrifice even a single hair from the eyebrow of an Egyptian soldier or civilian for the sake of Hamas and all the people who wage jihad while indulging themselves in all kinds of dishes at the swimming pool,” Egyptian talk-show host Mazhar Shahin said July 12. “They goad people into fighting, terrorism and violence under the pretext of jihad while they themselves sit at a hotel, a swimming pool or a nudist beach.”

• The psychological effects of air-raid sirens across Israel may be long lasting: For the first time, Israel’s populous center, including Jerusalem and Tel Aviv, are the sites of frequent air-raid sirens. Though the incoming rockets are either being intercepted or allowed to fall harmlessly in unpopulated areas, the psychological impact of this conflict is likely to reinforce Israelis’ sense of being under siege — particularly for those too young to remember the last time their cities were the site of bombings or rocket fire.

As Israeli author and journalist Ari Shavit wrote in London’s Sunday Times, the quiet of the last decade or so in metropolitan Tel Aviv — since the end of the Second Intifada — helped lull many Israelis into thinking they lived in some kind of Middle Eastern version of California, complete with skyrocketing real estate prices and high-tech start-ups. But with parents now running with their kids to bomb shelters, that bubble has burst.

Combined with the wars in Syria and Iraq, the revolution and counterrevolution in Egypt, and the rest of the Arab Spring, Israelis now may have more reason than ever to be wary of relying on peace agreements for their security.

• The link between Middle East ferment and anti-Semitism worldwide persists: As with past conflagrations between Israel and the Palestinians, anti-Semitic incidents around the world have spiked since Israel launched its bombing campaign in Gaza. A rabbi in Morocco was attacked on his way to shul last Friday night. Protesters in Paris marched to the Abravanel synagogue on Sunday chanting anti-Semitic slogans, throwing projectiles, and clashing with police and Jews. A synagogue elsewhere in France was firebombed. In Chile, a Jewish home was stoned while assailants yelled anti-Semitic epithets, according to the World Jewish Congress.

• American Jews are playing their familiar role: The Israel-Diaspora relationship may be changing, but the way American Jews react to Israel in a time of crisis is not. The American Jewish organizational establishment is collecting money, going on solidarity missions and taking to the airwaves to defend Israel’s reputation abroad. Those staples of solidarity efforts, Israel emergency fundraising campaigns, are back in full swing.