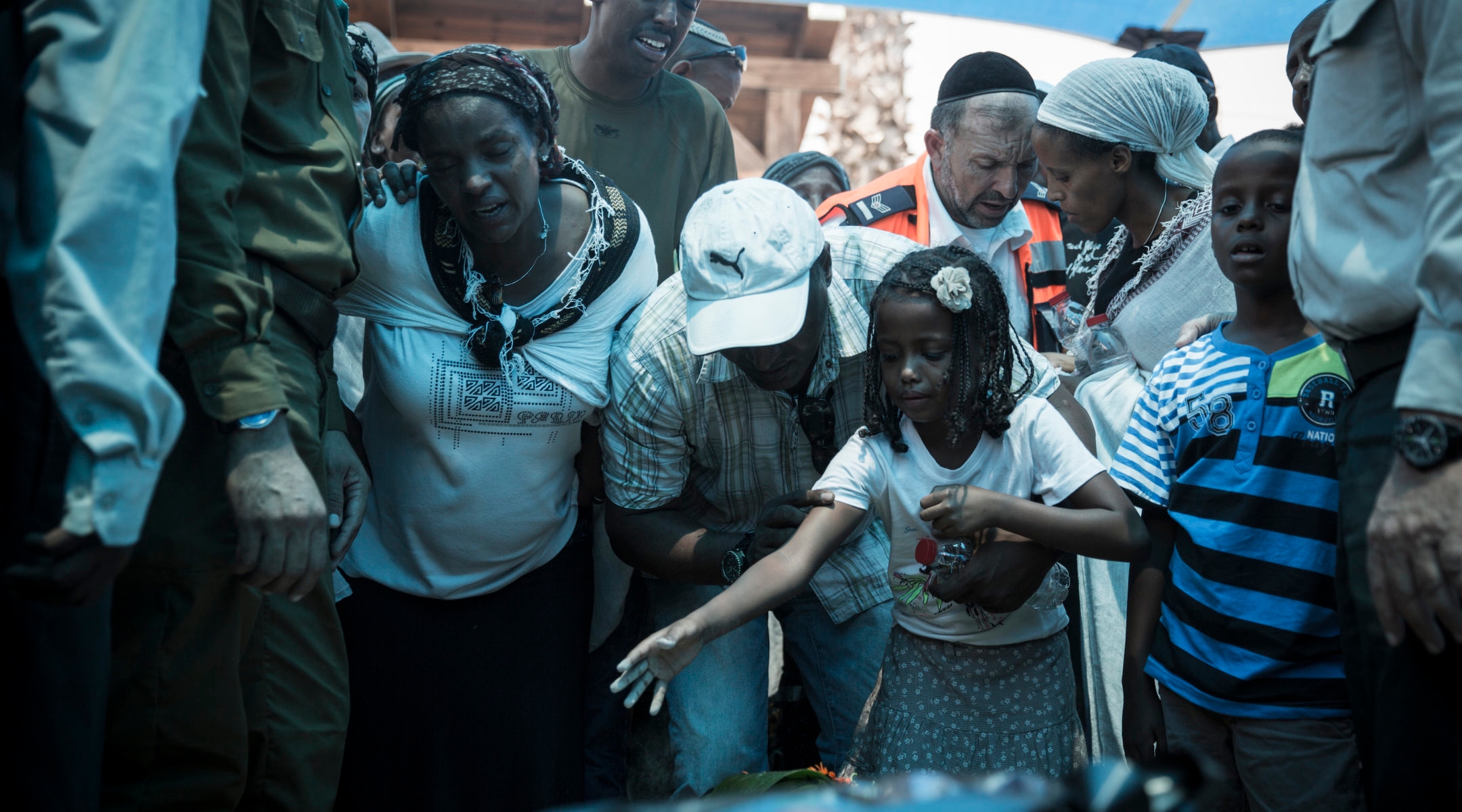 The wife and young daughter of Sergeant Major Bayhesain Kshaun cry over his fresh grave during the funeral ceremony at the Netivot military cemetery, July 22, 2014. Kshaun, 39, was killed by an anti-tank missile fired at the force responding to a terrorist infiltration incident on July 21. (Hadas Parush/Flash90)
Advertisement

TEL AVIV (JTA) — The air war has become a ground war. The Israeli population, always on edge, has become a nation in mourning.

And a military operation that nearly ended after eight days has become a bloody invasion of Gaza that could last weeks and has Israeli officials divided over how it ought to end.

With the death toll rising on both sides — more than 600 Palestinians and 30 Israelis were reported killed as of Tuesday — some Israeli leaders are calling for a cease-fire. But others argue that the only way to address the Hamas threat is to reoccupy Gaza, a step that would be very costly to the Israeli military and Israel’s international standing.

“A cease-fire will mean that any time Hamas wants to fight it can,” former Israeli National Security Advisor Ya’akov Amidror told JTA. “Occupation of Gaza will bring longer-term quiet, but the price will be very high.”

Operation Protective Edge, which began July 8 with a week and a half of Israeli airstrikes, expanded into a ground operation late last Thursday night, July 17. The Israeli government says the invasion is aimed stopping the wave of violence against Israeli civilians.

Destroying the network of tunnels Hamas uses to transport arms and personnel is part and parcel of that. In heavy fighting in Gaza City, Israel has uncovered dozens of Hamas tunnels, including some that lead into Israeli territory. On Saturday, two squads of Hamas militants attempted to use those tunnels to infiltrate Israel but were driven back by Israeli troops. At least six Israeli soldiers have been killed in fighting following infiltration attempts.

RELATED: Why Hamas’ tunnels are the new front in the war with Israel

“We will carry it out to achieve the goal of restoring quiet to Israel’s citizens for a prolonged period while inflicting a significant blow on the infrastructures of Hamas and the other terrorist organizations in Gaza,” Israeli Prime Minister Benjamin Netanyahu said in a televised address Saturday night. “We are not deterred and we will continue to act as necessary.”

Nineteen months of relative quiet followed Israel’s last conflict with Hamas in November 2012, which ended with a U.S.-brokered ceasefire. Last week, Israel accepted an Egyptian-proposed cease-fire that would have reverted to the 2012 status quo, but Hamas rejected the deal.

Now a number of right-wing Israeli politicians – several of them close Netanyahu allies — are saying such an agreement would provide only temporary reprieve and are calling instead for Israel to reconquer Gaza, which Israel withdrew from in 2005.

“We’ll need to make a very complex decision to return to the Gaza Strip and take back security responsibility for the Gaza Strip,” Ze’ev Elkin, the head of the Knesset’s Foreign Affairs and Defense Committee and a member of Netanyahu’s ruling Likud party, said last week. “If we do not do it, the result is obvious. We can recover from Hamas, but if you want to bring real security to the people in Israel’s south, there is only one way to do it.”

A range of experts from across the political spectrum say such a step is unrealistic. It would mean Israel taking responsibility for almost 2 million Palestinians and would invite international condemnation.

“Eradicating Hamas and the subsequent political engineering of Palestinian society is not something outsiders can do,” Ephraim Inbar and Eitan Shamir, analysts at the right-wing Begin-Sadat Center for Strategic Studies, wrote in a recent policy paper. “Even if Hamas rule can be terminated, the alternatives are Israeli rule, the rule of more radical groups, or chaos. None are good options.”

Some analysts predict that a cease-fire like the one reached two years ago would now yield a longer period of quiet because Israel has inflicted more damage on Hamas than previously. Eighty-seven rockets fell on Israel on Sunday, the lowest single-day tally since the operation began, though the number jumped back to 139 on Monday.

“Every rocket that’s fired, there’s no way to replace it,” said Nitzan Nuriel, the former director of the prime minister’s Counter-Terrorism Bureau. “So when we talk about the next round, it can’t be so close if there’s nothing to fire.”

Israeli Labor Party Chairman Isaac Herzog sees a cease-fire as an opportunity to strengthen the hand of the more moderate Palestinian Authority. Herzog wants an agreement to give the Palestinian Authority control of Gaza’s border crossings, a step he hopes will lead to full P.A. rule in Gaza.

“We can move on to an international effort to broker a deal with this weakened Hamas whereby there can be a change in Gaza,” Herzog said last week.

Amidror said reoccupation of Gaza would be difficult, but as long as Hamas remains in Gaza, a future conflict is all but inevitable — sooner or later.

“As long as there’s fire from Gaza, the public will support forceful action against Hamas,” he said. “As long as Hamas doesn’t change its nature, we’ll need an operation.”