Unraveling the mystery of a watery headstone 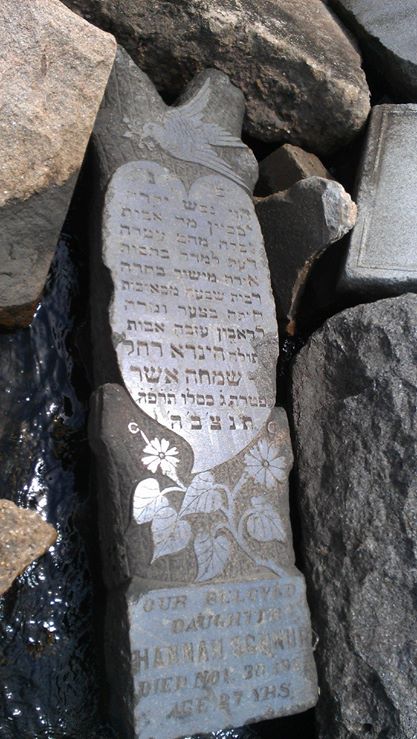 This gravestone found on a Long Island, N.Y., beach set off a search into how it reached there and who was Hannah Schnur, the name on the stone, July 2014. (Courtesy Howard Schoenfeld)
Advertisement

BALTIMORE (JTA) – Howard Schoenfeld and his teenage daughter Zahava set out for a stroll along a Long Island beach in New York on a recent Sunday morning. 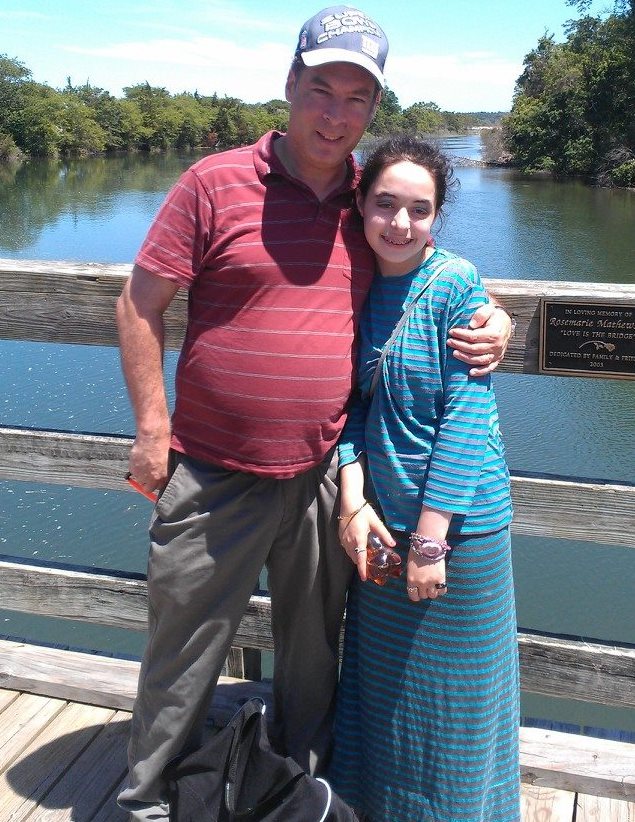 Zahava likes to collect shells, so after parking at Oak Beach, a popular spot for vintage-car enthusiasts, they walked along the inlet.

Eyes cast downward, they stumbled upon an unlikely find — a gravestone. It read:

Above the English appeared eight lines in Hebrew, each of the first letters spelling out the deceased’s first and middle Jewish names, Hinda Rachel. The middle of the stone had her name and her father’s, Simcha Asher.

Neither Schoenfeld nor his daughter knew what to make of the sight. Why would a gravestone be lying in the water, nowhere near a cemetery?

Turns out the Schnur gravestone wasn’t the only one. Schoenfeld said an “uncountable” number of flat-lying gravestones combined to form the jetty they encountered that day. All but two – the other didn’t seem to be for a Jewish person – faced down, he said.

“They couldn’t have washed up somehow,” Schoenfeld said. “They had to have been put there.”

But by who, and why? And who was Hannah Schnur?

Schoenfeld, a computer salesman from nearby Queens, used his smartphone to record the water splashing onto the graves. He posted the video on the Facebook page of Dan’s Deals, a Web-based bazaar popular in the modern Orthodox community, and asked for assistance.

It drew the attention of “Seeking Kin,” which asked Rabbi Avidan Milevsky of Baltimore to read and decipher the elegy’s blurry Hebrew words. Milevsky said they came not from Scripture but apparently from a distraught father whose daughter led a hard life. It read:

Woe, treasured soul
Our forefathers will cry bitterly
Their crown has fallen
Knowledge she learned [unintelligible]
She chose the straight path
She endured many pains
She lived in pain and bitterness
In anguish she left her forefathers

This gravestone found on a Long Island, N.Y., beach set off a search into how it reached there and who was Hannah Schnur, the name on the stone, July 2014. (Courtesy Howard Schoenfeld)

A subsequent article in the New York Post newspaper didn’t mention the Schoenfelds or Schnur, but said the town of Babylon, where Oak Beach is located, had utilized gravestones to reconstruct a jetty damaged during Hurricane Gloria in 1985.

A town official said the granite stones were solicited from monument companies and cemeteries, which donated those containing misspellings or other flaws and apparently were going unused. The jetty’s gravestones were supposed to be placed face down, the article said.

Schoenfeld, meanwhile, also posted an appeal on FailedMessiah.com, another Jewish website. One reader wrote that he learned of Babylon’s using more than 800 gravestones for several jetties.

Another FailedMessiah reader found in researching Hannah Schnur that she was buried in Brooklyn’s Washington Cemetery. The reader, who logged in as Mee-Samcha?, said he visited the cemetery the morning of July 22, several days before the Post story, and went to the gravesite, confirming through the death date and the Hebrew names of the daughter and father chiseled on the stone that it was the same Hannah Schnur. The only discrepancy appeared to be in one letter of her Hebrew name.

The present-day marker, the writer added, covers Hannah and her mother, Ester, who apparently died in 1962. Mee-Samcha? posited that “when Ester Schnur passed away, the existing (and in my opinion beautiful) stone was discarded and was replaced by a modern, simple joint stone.” Hannah’s sister Fannie, who died in 1967, is buried nearby. Her grave, too, states in Hebrew that she is the daughter of Simcha Asher, Mee-Samcha?wrote.

“Seeking Kin” called Washington Cemetery and learned from an employee that no one named Fannie Schnur or Ester Schnur is buried there. No next of kin for Hannah Schnur appears in the cemetery’s records, he said, but a woman named Bella Schnur was paying for annual care of the grave until about 25 years ago.

The employee added that he could not determine whether the same information applied to Fannie without knowing the surname.

As to the original gravestone’s ending up at Oak Beach? The man didn’t know, but indicated that the cemetery today would not be involved.

“If there’s an error on the stone, the family would have to deal with the monument company,” the employee said. “We’re not allowed to touch the stones.”

Pat Vassilaros, a Pennsylvanian who has assisted “Seeking Kin” on several searches, verified through U.S. and New York City census records that all were members of the same family.

In 1920, she said, Hannah Schnur worked as a bookkeeper for an importer. Her father, Samuel, owned a dance hall; he and his wife, Ester, were immigrants from Galicia. The family lived at 90 Columbia St. on Manhattan’s Lower East Side. Hannah was the second of six children living there, with sisters Sadie, Annie, Bella and Fannie along with brother Jacob.

By the 1940 census, Vassilaros said, Samuel was dead and Ester, Annie, Bella and Fannie were living on West 173rd Street in the Washington Heights neighborhood.

Schoenfeld said he feared that the gravestone found at the water’s edge may have been desecrating the person’s memory — a similar feeling that had struck him two years ago in Barcelona when he saw a Jewish gravestone embedded in a brick wall.

If Schnur kin come forward, “I’d tell them I saw [the gravestone] there,” Schoenfeld said.

“What else is there to tell them? They’d have to decide what to do with it.”

(Please email Hillel Kuttler at seekingkin@jta.org if you know the relatives of the late Hannah Schnur. If you would like “Seeking Kin” to write about your search for long-lost relatives and friends, please include the principal facts and your contact information in a brief email. “Seeking Kin” is sponsored by Bryna Shuchat and Joshua Landes and family in loving memory of their mother and grandmother, Miriam Shuchat, a lifelong uniter of the Jewish people.)