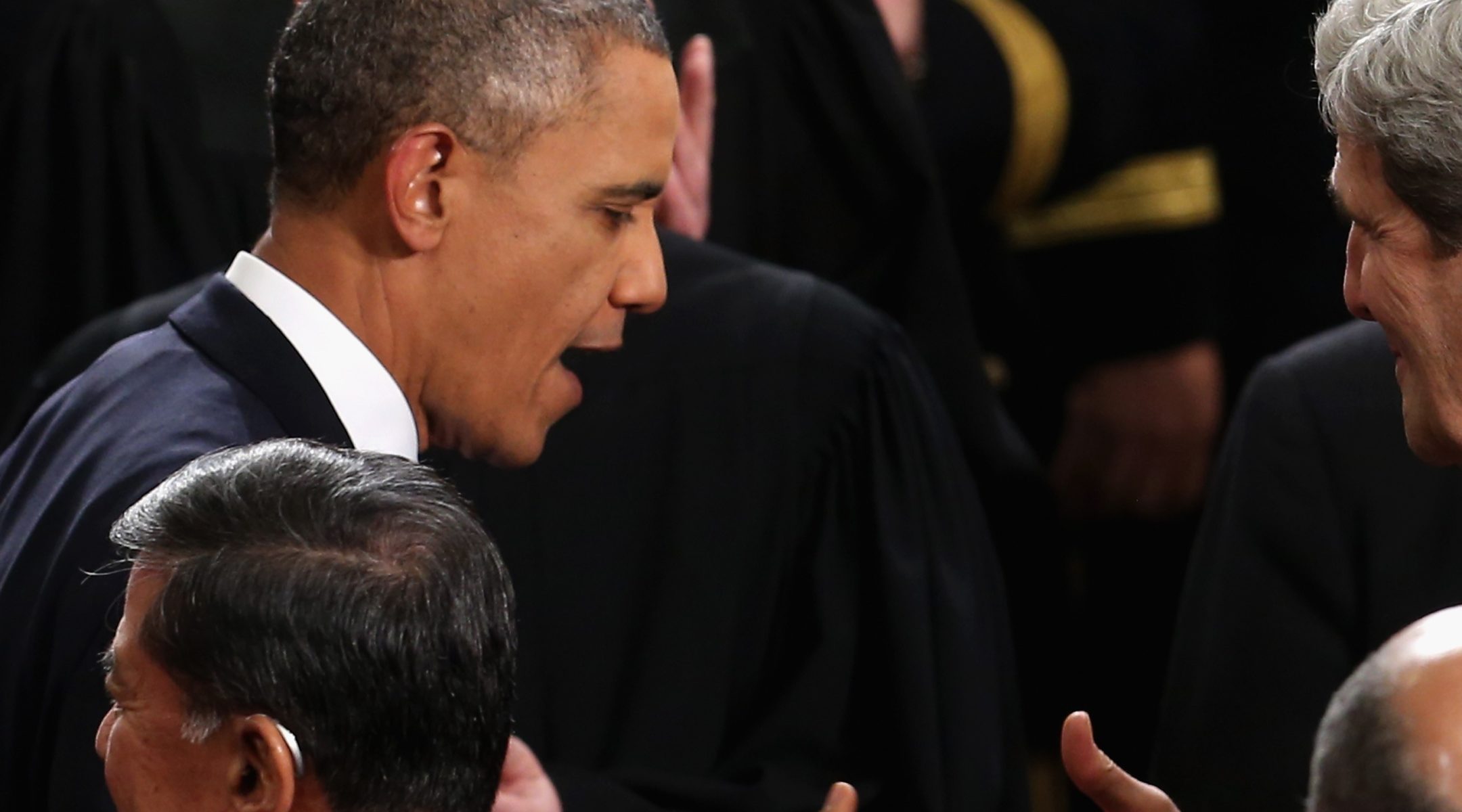 President Obama is greeted by U.S. Secretary of State John Kerry (R) during the State of the Union address to a joint session of Congress in the House Chamber at the U.S. Capitol on Jan. 28, 2014 in Washington, DC. (Mark Wilson/Getty Images)
Advertisement 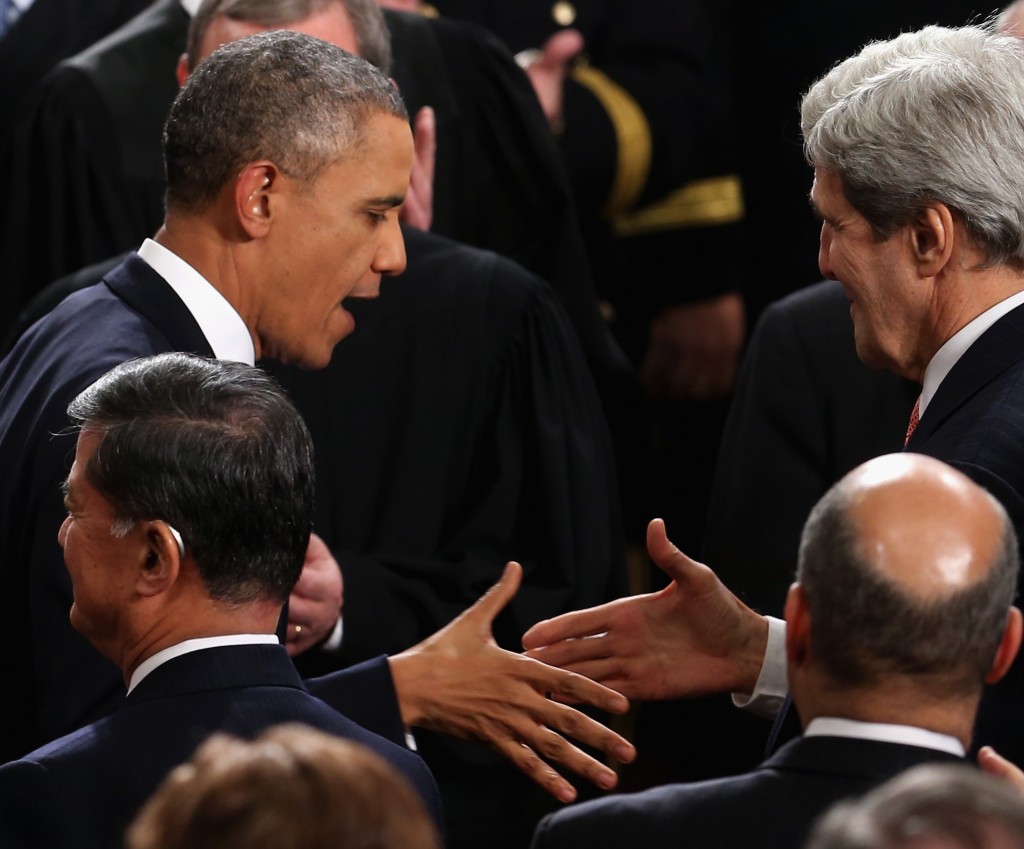 President Obama is greeted by U.S. Secretary of State John Kerry (R) during the State of the Union address to a joint session of Congress in the House Chamber at the U.S. Capitol on Jan. 28, 2014 in Washington, DC. (Mark Wilson/Getty Images)

WASHINGTON (JTA) – Does the prospect of President Obama’s lame-duck period, coupled with the multiple foreign crises he is facing, diminish his quest for Israeli-Palestinian peace?

Little on the immediate diplomatic horizon signals an intensive U.S. interest in advancing the peace process.

There have been no announcements of high-level meetings between Obama and the Palestinian and Israeli leaders at the U.N. General Assembly, which begins this year on Sept. 16. There have been no leaks, as there have been in the past, that Obama would be making any major statements on the peace process at the G.A.

John Kerry, the peripatetic U.S. secretary of state who lost count of his visits to the region until the collapse in April of peace talks between Israel and the Palestinian Authority, has no plans to return anytime soon.

Rather, Kerry and Obama are focused on an expanding range of issues, including escalations in Russia’s conflict with Ukraine, pushing back against Islamist extremists throughout the Middle East and a looming deadline in nuclear talks with Iran.

Additionally, Obama administration relations with both the Israelis and Palestinians have soured since the collapse of the peace talks, which the Americans blamed on both sides — the Palestinians for resisting a deadline extension, Israel for expanding settlement activity. Tensions were exacerbated over civilian casualties among Palestinians during Israel’s war with Hamas in the Gaza Strip over the summer.

The disagreements don’t seem to have gone away, despite a cease-fire that appears to be firmly in place. On Tuesday, the Obama administration formally called on Prime Minister Benjamin Netanyahu’s government to reverse its seizure of West Bank land for settlement building, saying it was counterproductive to peace efforts. While U.S. administrations have expressed concern about settlement activity in the past, direct calls for Israel’s government to reverse a decision are rare.

Alan Solow, a past chairman of the Conference of Presidents of Major American Jewish Organizations and a major fundraiser for Obama’s election campaigns, said it doesn’t make sense to pursue a peace that the sides are not ready to embrace.

“They recognize they want to spend their time productively,” Solow, a confidant of the administration, told JTA in an interview on Tuesday. “Where they sense a further investment of time will not yield progress, there are plenty of other problems they can turn to that may yield progress.”

Statements from officials suggest that the Obama administration is more interested in managing rather than resolving the conflict.

Jen Psaki’s, Kerry’s spokeswoman, said Tuesday that a meeting Kerry planned to have in Washington the next day with Saeb Erekat, the top Palestinian peace negotiator, would focus on the cease-fire between Israel and Hamas. She did not mention the peace process.

“They’ll talk about a range of issues, there’s an ongoing cease-fire discussion and a range of longer-term issues,” she said.

Asked by a reporter about Palestinian Authority President Mahmoud Abbas’ latest reported proposal for a three-year withdrawal of Israel from the West Bank based on U.N. resolutions, Psaki would say only that the United States did not see the proposal as “productive.”

Aaron David Miller, a former Middle East peace negotiator under Republican and Democratic presidents, said it never made sense for the Obama administration to focus as intently as it did in its second term on an Israeli-Palestinian deal because the sides were not ready for one.

“Transformative change requires two things — a crisis or an opportunity so profound that it empowers two leaders to go beyond where they’ve been before,” said Miller, a vice president of the Wilson Center who is about to release a book on the diminished power of the modern American presidency, “The End of Greatness: Why America Can’t Have (and Doesn’t Want) Another Great President.”

“That is what would be required in the less than thousand days [left] of Obama’s presidency,” he said. “It would have to be a set of circumstances that are regionally based and raised the costs and incentives for both Abbas and Netanyahu. This is the critical piece, the ownership on the part of Bibi and Abbas.”

Jonathan Schanzer, a vice president of the Foundation for Defense of Democracies, a foreign policy think tank that favors intervention, counseled continued U.S. engagement should the parties decide they seriously want to discuss peace. But Schanzer said it was about time for the Obama administration to let go of its ambitions for a resolution to the Israeli-Palestinian conflict.

“Imagine if we had spent the same time and energy fighting ISIS over the last 10 months as we had investing in the peace process,” he said, referring to the jihadist group in Iraq and Syria that the Obama administration has only in recent weeks directly engaged.