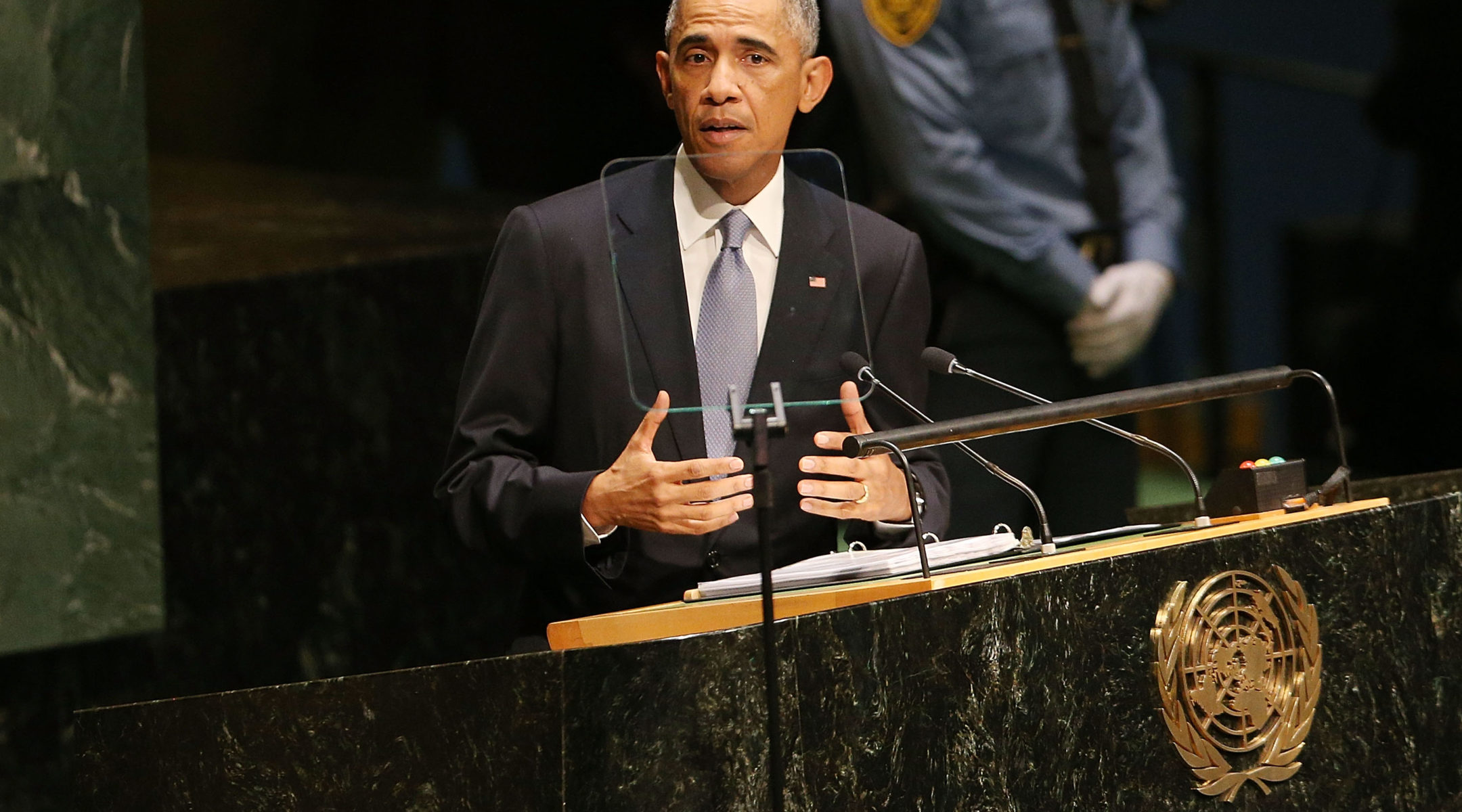 In his address last year to the General Assembly, Obama spent a great deal of time talking about Tehran’s nuclear pursuit, describing it as one of two major focus areas for American diplomatic efforts (the other was the Israeli-Palestinian conflict).

On Wednesday, he devoted just four lines to Iran.

“America is pursuing a diplomatic resolution to the Iranian nuclear issue as part of our commitment to stop the spread of nuclear weapons and pursue the peace and security of a world without them,” Obama said. “This can only happen if Iran takes this historic opportunity. My message to Iran’s leaders and people is simple: Do not let this opportunity pass. We can reach a solution that meets your energy needs while assuring the world that your program is peaceful.”

“Obama devoted only 78 words at #UNGA to greatest threat to world peace, the #Iran nuclear threat; 1,540 words to #ISIS,” the American Jewish Committee noted in a tweet.

Near the speech’s conclusion, Obama also spoke a bit about the Israeli-Palestinian conflict.

“Leadership will be necessary to address the conflict between Palestinians and Israelis,” he said. “As bleak as the landscape appears, America will not give up on the pursuit of peace.”

The turmoil in Iraq, Syria and Libya should disabuse anyone of the mistaken notion that the Palestinian-Israeli conflict is somehow the root of all Middle East conflict, Obama said. Noting that the turmoil has made too many Israelis ready to abandon the hard work of peace, Obama diverted from his prepared remarks and added, “That’s something Israelis should reflect on.”

“The status quo in the West Bank and Gaza is not sustainable,” Obama said. “We cannot afford to turn away from this effort, not when rockets are fired at innocent Israelis or when the lives of so many Palestinian children are taken from us in Gaza.”

He said, “Israelis, Palestinians, the region and the world will be more just and safe with two states living side by side in peace and security.”

Most of the president’s speech focused on the need for the international community to counter what he described as the “cancer of violent extremism.” At the top of the list was ISIS, the Islamic group in Iraq and Syria also known by the acronym ISIL.

“Collectively, we must take concrete steps to address the dangers posed by religiously motivated fanatics and the trends that fuel their recruitment,” Obama said, outlining four major focus areas.

“The terrorist group known as ISIL must be degraded and ultimately destroyed,” he said. “There can be no reasoning, no negotiating with this brand of evil. The only language understood by killers like this is the language of force.”

The second, Obama said, is for “the world, especially Muslim communities, to explicitly, forcefully and consistently reject the ideology of organizations like al-Qaida and ISIL.” That means, the president said, cutting off the funding of those who fuel hateful groups and ideologies; contesting the space terrorists occupy, including the Internet and social media; expunging intolerance from schools; and bringing people of different faiths together.

“There should be no more tolerance of so-called clerics who call upon people to harm innocents because they are Jewish, Christian or Muslim,” Obama said.

The third focus area Obama outlined was addressing sectarian strife and resolving differences at the negotiating table rather than through violent proxies. In Syria, he said, that means finding a solution that works for all Syrian groups.

“Together with our partners, America is training and equipping the Syrian opposition to be a counterweight to the terrorists of ISIL and the brutality of the Assad regime,” Obama said as Syria’s U.N. delegation watched from the audience. “But the only lasting solution to Syria’s civil war is political: an inclusive political transition that responds to the legitimate aspirations of all Syrian citizens, regardless of ethnicity or creed.”

The fourth area of focus, he said, must be to encourage civil society and entrepreneurship in the Arab and Muslim world, particularly among young people.

The first nation Obama focused on was Russia, which he lumped in with ISIS and the Ebola virus as reasons for “a pervasive unease in our world – a sense that the very forces that have brought us together have created new dangers.”

“Russian aggression in Europe recalls the days when large nations trampled small ones in pursuit of territorial ambition,” he said. “We will impose a cost on Russia for aggression and counter falsehoods with the truth.”

The president also talked briefly about the need for a more robust and coordinated response to the Ebola outbreak in west Africa.