What a GOP Senate would mean for the Jewish communal agenda 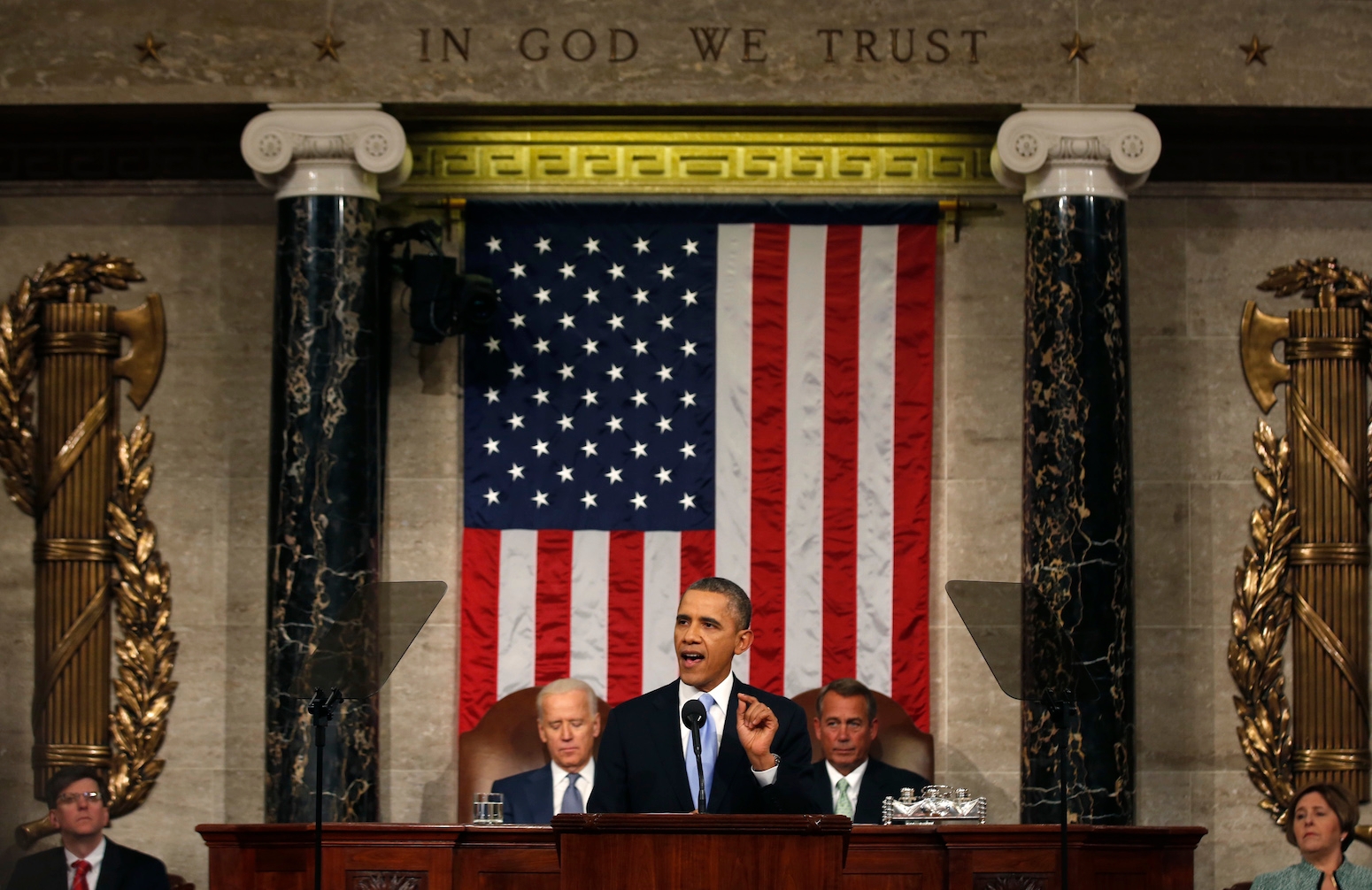 President Obama, shown delivering the State of the Union address in January 2014, is facing even greater political gridlock if Republicans gain control of the Senate along with the House of Representatives. (Larry Downing-Pool/Getty Images)
Advertisement

WASHINGTON (JTA) – Should Republicans win the Senate and maintain control of the House of Representatives on Nov. 4 — as many observers expect them to do — the political gridlock that has characterized much of President Obama’s term is poised to intensify.

Jewish strategies, however, will remain the same: focus on areas, however marginal, where successes are within reach. Among the areas: funding for elderly care and resettling refugees; working at the state levels on issues such as poverty relief and advancing gay rights; and keeping the major issues suffering from legislative neglect, like immigration, alive in the public eye.

An exception is foreign policy, where a GOP win could mean movement on some issues, including Iran sanctions.

With midterm elections less than a month away, here’s an issue-by-issue look at what the Jewish community can expect if Republicans gain control of the Senate and House.

With deadlock expected, reforms to major programs like Medicare and Medicaid are not anticipated.

“On those issues there is bipartisan support,” he said.

Meanwhile, Rabbi Steve Gutow, the president of the Jewish Council for Public Affairs, which in recent years has expanded its focus on income inequality, said it’s OK to work the margins when the partisan divide makes it impossible to advance bigger issues, and he expected the divide to grow after the next election.

Gutow cited as an example the Supplemental Nutrition Assistance Program, or SNAP, also known as food stamps. Republicans in 2011 started out by proposing $39 billion in cuts, half the program’s budget. JCPA was among the groups that this year helped broker bipartisan agreement to cut SNAP spending by $9 billion over the next decade.

“We look at what’s realistic and go for it,” Gutow said. “You support the efforts that seem to be those that might win.”

Republican majorities in both houses may mean more stasis on domestic issues but could advance a number of foreign policy issues. Chief among them is the effort by some pro-Israel groups, led by the American Israel Public Affairs Committee, to pass new sanctions on Iran that would kick in should nuclear talks between Iran and the major powers collapse.

The Democratic leadership in the Senate, at Obama’s behest, has stymied new sanctions, although enough Democratic senators back the legislation that it would likely have a majority should it come to a vote. Obtaining Democratic support even under a Republican majority would be key for a lobby that is keen to show that its initiatives have the backing of both parties.

“It’s likely that an emboldened Republican presence in Congress will want to pursue that vigorously,” said Eric Fusfield, the director of legislative affairs at B’nai B’rith International, a group that has backed the new sanctions.

That does not necessarily mean a confrontation with the White House, Fusfield said. Instead, the majority could spur Obama to reach an agreement with Congress on sanctions.

“There will still need to be a bipartisan consensus,” he said.

Much depends on whether Iran and the major powers meet a Nov. 24 deadline for a deal, Fusfield said.

Dylan Williams, the director of government affairs for J Street, which opposes new sanctions, agreed that Republicans would find it tougher to pass sanctions that may sabotage a deal with Iran.

“If an agreement is reached, it will survive both the current Senate and the next Senate, whatever its constitution,” he said. “I think senators from both parties will understand that if a deal is reached that does provide assurance that Iran will not acquire a nuclear weapon, that it is that or something far worse.”

Obama’s recent pivot toward greater intervention in Syria and Iraq would find a more sympathetic ear in a Republican-majority Congress, said Daniel Runde, the director of the Project on Prosperity and Development at the Center for Strategic and International Studies.

“You would definitely see the willingness to use the full spectrum of American power,” said Runde, a top foreign aid official under President George W. Bush.

Runde noted that much of the reluctance to support the enhanced Middle East involvement that Obama has favored comes from Senate Democrats, as well as some anti-interventionist Republicans like Sen. Rand Paul (R-Ky.).

Obamacare is here to stay, Fusfield said — at least through the 2016 elections.

“Unless the GOP reaches a supermajority of 60, any attempts to repeal Obamacare will not pass the Senate, and even if both chambers will repeal Obamacare, everyone understands the president will veto it,” said Fusfield, who tracks the issue closely in part because B’nai B’rith maintains a network of elderly care homes.

“You may see Republican tweaks,” he added, for instance in increasing the law’s definition of the workweek from 30 to 40 hours, or the removal of the law’s tax on the sale of medical devices.

On paper, a wholly Republican Congress should see an advance in the most famously deadlocked issue: how to address the 11 million and counting undocumented migrants in the United States, said Hadar Susskind, the Washington director of Bend the Arc, a social advocacy group.

Rep. John Boehner (R-Ohio), the House speaker, has cited differences with Sen. Harry Reid (D-Nev.), the Senate majority leader, to explain the House’s failure to act on a bill passed by the Senate in 2013. Having Sen. Mitch McConnell (R-Ky.) in the majority seat would do away with that obstruction.

Republicans, while eager to court the Hispanic vote, have resisted outlining a path to citizenship until border security is addressed. Democrats want to fast-track citizenship for undocumented migrants who arrived here as minors.

Don’t bet on a change, though, Susskind said.

“They’re spooked by Cantor,” he said, referring to the precipitous fall this year of the former House majority leader, Rep. Eric Cantor (R-Va.), who lost a primary to a Tea Party challenger who said Cantor was soft on immigration — although as majority leader he had actually blocked the Senate bill from advancing.

Melanie Nezer, the Washington director of HIAS, a global Jewish nonprofit that protects refugees, agreed that advancing an overhaul was unlikely and outlined a familiar strategy: work the smaller issues, including renewing the Lautenberg Amendment. Originally fashioned to address the Soviet Jewry crisis in the 1980s, the amendment named for the late Sen. Frank Lautenberg of New Jersey extends refugee status to those persecuted for their religion.

Another focus would be maintaining funding for refugee resettlement, a HIAS focus in recent years, which Nezer said had bipartisan support in part because of the killing fields in Iraq and Syria.

The single area domestically that would likely mean far-reaching change with a Republican majority in both chambers is in confirmations.

Reid changed the rules last year to allow simple majority confirmations and has been rushing this year to fill posts long stymied since 2011 by the earlier 60-vote rule. The majority leader has made some headway, although Republican senators are still able to delay the process to a degree by placing personal holds on nominees.

A GOP majority could put on hold nominations as high profile as the replacement for Eric Holder, the attorney general who has announced his intention to retire, as well as an array of lower court judges.

Nancy Kaufman, the CEO of the National Council of Jewish Women, which has made what she calls “judicial emergencies” a centerpiece of its advocacy, has said that a Republican Senate could precipitate a crisis.

“They have to live up to their responsibility to consider and vote,” she said of GOP senators. “It’s serious now and it’s going to be more serious come the new session.”

One nomination of interest to the Jewish community is that of Rabbi David Saperstein, the longtime director of the Reform movement’s Religious Action Center who has been nominated to serve as the ambassador at large for international religious freedom.