(This is part of a special JTA report on conversion in America. Read our other pieces about who’s converting to Judaism, and about the 10 questions about Jewish conversion you want to know but are afraid to ask.)

Number of converts: Unknown. Over the last seven years, approximately 1,275 conversions have been certified by conversion courts affiliated with the Rabbinical Council of America, but plenty of Orthodox conversions take place outside the RCA’s system. 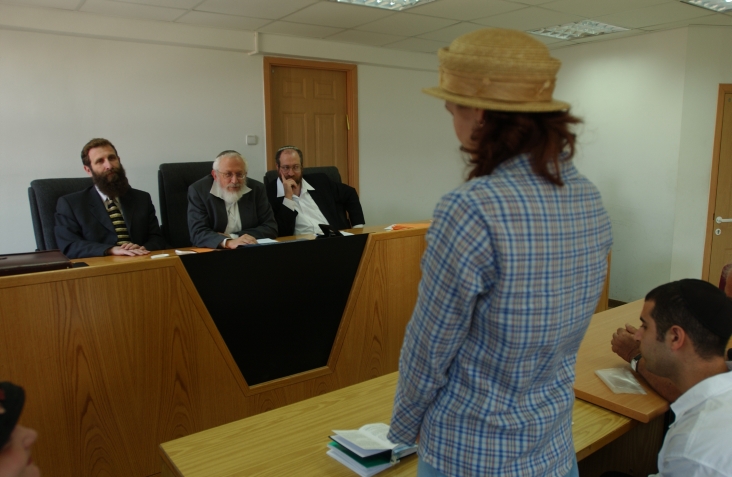 A women converting to Judaism in front of a three-judge Orthodox rabbinic court in Jerusalem. (Flash90)

Ritual: Approval by a three-judge religious court comprised of three Orthodox men (usually rabbis), male circumcision (or, for circumcised men, symbolic drawing of blood at the place of circumcision) and ritual immersion in a mikvah.

Requirements: Commitment to performing all the Torah’s commandments according to Orthodox interpretations of Jewish law.

Preparation: In most cases, regular study with a rabbi and/or religious mentor. The only rabbi known to offer an Orthodox conversion class in the United States, Rabbi Maury Kellman of New York, has a yearlong curriculum for his Manhattan Mechina L’Giyur that covers Jewish philosophy, law, history and ethics; field trips to places like Brooklyn and Israel; and occasional Shabbaton weekends. Prospective converts are expected to adopt Jewish practices, join an Orthodox Jewish community and regularly attend synagogue.

Who’s converting? Spiritual seekers, non-Jews dating Jews, gentiles drawn to Judaism through friends and those who converted through other Jewish denominations. The latter category includes individuals raised as Jews in non-Orthodox households who subsequently realized they don’t count as Jewish according to Orthodox Jewish law (usually because their mother isn’t halachically Jewish), as well as individuals who previously converted Reform or Conservative and then decided they wanted an Orthodox conversion. This usually happens because they became more observant or want their Jewish status to be unimpeachable. Kellman estimates the breakdown of students at his Orthodox conversion course in Manhattan as 30-35 percent converts who already converted outside of Orthodoxy, 30 percent relationship converts, 15 percent seekers and 15 percent drawn to Judaism for social reasons. The vast majority of Kellman’s students are women, mostly aged 25 to 40.

At Rabbi Maury Kellman’s weekly Orthodox conversion class on Manhattan’s Upper West Side, the students are a mix of seekers, gentiles in relationships with Jews and one-time Reform or Conservative converts seeking Orthodox conversion. (Uriel Heilman)

Attitude toward conversions performed by other denominations: Not good enough. Orthodox conversion is the only acceptable path to becoming a Jew.

Problems: Only in 2007 did the Rabbinical Council of America, the country’s main centrist Orthodox rabbinic association, establish a standardized process for conversions. The system, called Geirus Policies and Standards, or GPS, constituted an attempt to “provide reasonable assurance that its converts and their offspring be accorded acceptance and recognition in other Jewish communities in the future.” But with many Orthodox conversions still taking place outside this system (perhaps most), critics say the establishment of central standards automatically casts aspersions on the Jewish credentials of anyone who does not go through the GPS process.

Who is a Jew without conversion: Anyone whose mother is Jewish according to halachah. In cases of uncertainty, such as some Ethiopian immigrants to Israel or members of so-called Lost Tribes whose Jewish ancestry is not universally accepted or known, most Orthodox authorities prefer conversion just to be on the safe side.