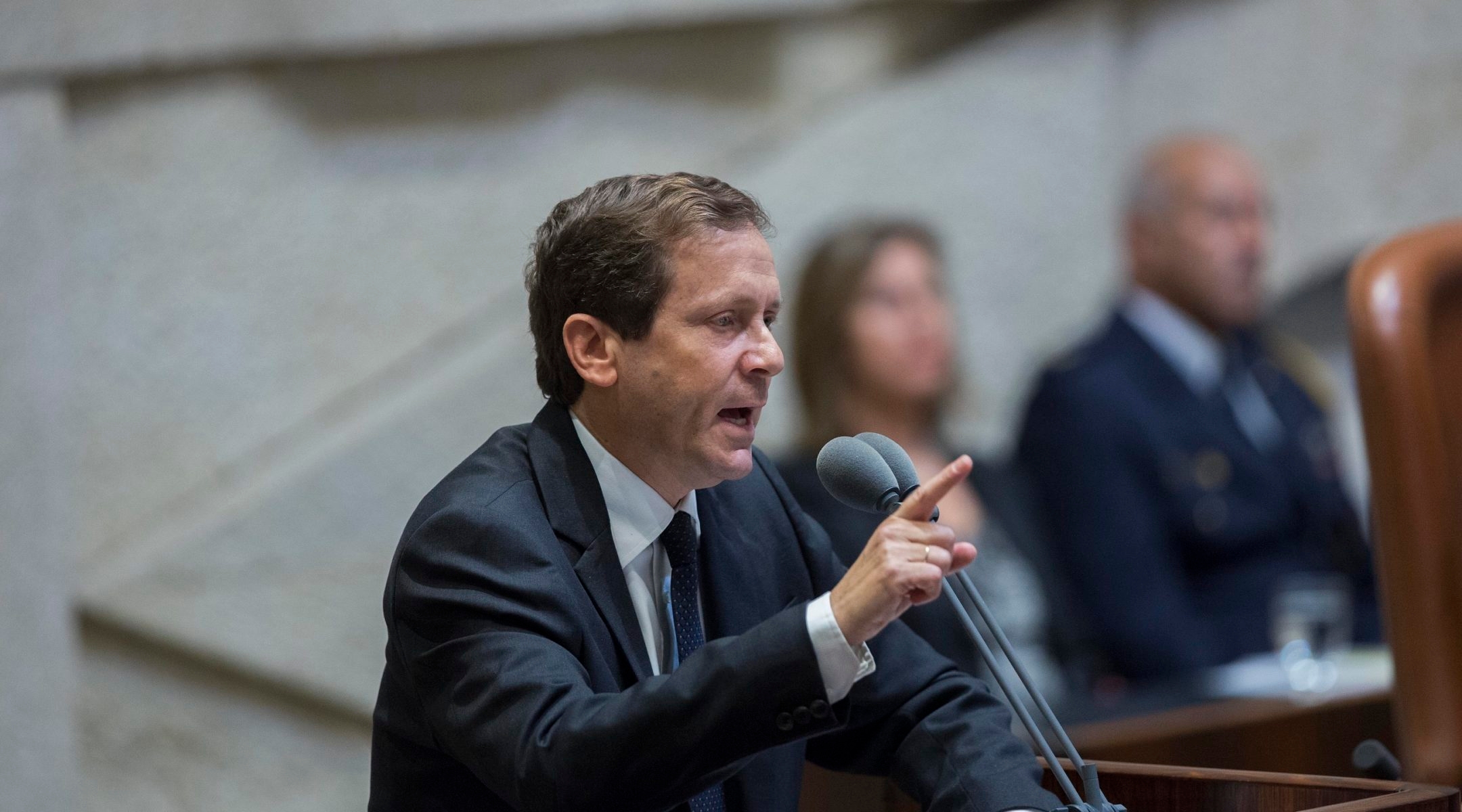 WASHINGTON (JTA) – Come early next year, there might be yet another world capital that opposes Israeli settlement expansion and sees Benjamin Netanyahu as principally responsible for Israel’s isolation: Jerusalem.

Isaac Herzog, the Labor Party leader, is faring well in the polls since Netanyahu called for new elections earlier this month and the Knesset dissolved itself.

The prospect of a left-leaning government means that U.S. mainstream Jewish groups, which since Netanyahu’s election in 2009 have pushed back against claims that his policies have been detrimental, will have to reassess messaging.

It wouldn’t be the first time.

A liberal U.S. Jewish community had to contend in 1977 with the election of Menachem Begin, then a Land of Israel maximalist whose prestate career was as a Jewish paramilitary leader who ordered the 1946 bombing of the King David Hotel. Fifteen years later, a pro-Israel community made hawkish through years of Likud-led governments suddenly contended with Yitzhak Rabin and his accelerated moves toward peace with the Palestinians.

This time around, Jewish community leaders say, it won’t be so difficult: Pro-Israel groups have long-established and friendly ties with Herzog and his political partner, Tzipi Livni, and in any case, American Jews are likelier to favor the policies of the political left.

“On the whole, the Jewish community respects the sovereignty of the Israeli public to decide who rules them,” said Abraham Foxman, the Anti-Defamation League’s national director. “What becomes difficult is you form relationships with one government and another one is in. We may lose some proximity, some access.”

Differences between the Netanyahu and Obama governments have sowed discomfiture for American Jews, particularly in the areas of Iran policy and settlement expansion. Frequently the differences have devolved into personal heated exchanges of insults.

Herzog has blamed Netanyahu for fomenting the tensions.

“You are the man who personally must take credit for the destruction of Israel’s relations with the United States,” Herzog said in an Oct. 27 Knesset speech that anticipated the dissolution of Netanyahu’s government. “You’ve repeatedly insulted President Obama and his administration.”

For the most part, organizations like the American Israel Public Affairs Committee have sided with Israel in the disputes, advancing Netanyahu’s stance that nuclear talks with Iran could lead to a bad deal and arguing that Palestinian recalcitrance is by far a more decisive factor in scuttling peace talks than is settlement policy in the West Bank.

Jack Moline, a leading Conservative movement rabbi known for his closeness to the Obama administration, said AIPAC would easily pivot toward a left-leaning Israeli government should it be elected in March’s polling.

“The question for anyone who supports Israel is do you support the right of the government to make its policy or do you only support a government that agrees with the policy you endorse?” said Moline, who until last month directed the National Jewish Democratic Council.

“I have no doubt that an organization like AIPAC that presents itself as representing accurately the policies of the Israeli government will make the shift, and elegantly. Organizations whose agendas for American politics mirrors the current administration in Israel will find themselves in a more difficult circumstance.”

True enough, said Morton Klein, who heads exactly such an organization, the Zionist Organization of America – but that’s not exactly new.

“We criticized Rabin and Ehud Barak and Ehud Olmert when they made their offers,” Klein recalled, referring to peace bids by previous Israeli prime ministers. “We are deeply concerned if Herzog and Livni win.”

One likelihood should Herzog win, Klein said, is that it will be harder to advance positions in Congress that oppose territorial concessions to the Palestinians.

“We fought against the Gaza withdrawal like crazy on the Hill,” he said, referring to Israel’s 2005 pullout from the Gaza Strip. “And they said, ‘Look, this is Ariel Sharon supporting it, how can I go against it?’ ”

Aaron David Miller, the vice president at the Wilson Center and for years a U.S. Middle East peace negotiator under various presidents, said a new government in Israel would likely not bring with it far-reaching change in part because so many other factors are fueling turmoil in the region, and in part because Netanyahu reflected an Israeli consensus on Iran.

One group with strong and established ties with both Herzog and Livni is J Street, a liberal U.S. Jewish Middle East policy group. Alan Elsner, its vice president for communications, predicted that U.S. Jewish groups would pivot toward the left-leaning governments in part because American Jewish grassroots favor accommodation.

“A lot of American Jews would welcome the prospect of a government that is sincere in seeking peace and that doesn’t put peace second to land and settlements,” he said. “Most Jewish organizations would go along; what choice do they have?”

Peter Joseph, who heads the Israel Policy Forum, a group that advocates for a two-state solution, said the tendency among the U.S. Jewish voters to back two states means that the greater challenge posed by the coming election was the rise of right-wing parties, which unlike Netanyahu reject Palestinian statehood in any form.

Jewish Home party leader Naftali Bennett, Joseph said, “is playing on people’s fears in a way that most American Jews have a problem sympathizing with.”

“My children and many members of the next generation are not going to sympathize and relate to a State of Israel that exhibits these kind of values.”