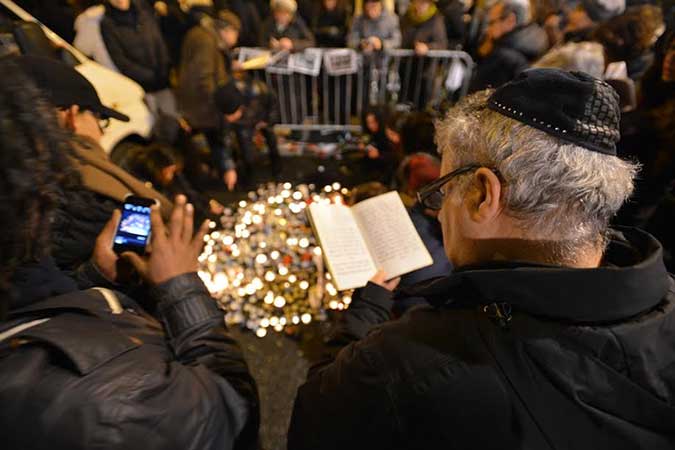 PARIS (JTA) — Several thousand people participated in a vigil for the victims of Friday’s deadly shooting at a kosher supermarket.

The vigil Saturday evening featured spontaneous singing of the French and Israeli national anthems outside Hyper Cacher, the shop where a self-described Islamist killed four and held more than 20 hostage before police broke in and killed him. The shooting came two days after two gunmen stormed the offices of the satirical newspaper Charlie Hebdo, killing 12 people.

On Sunday, French President Francois Hollande and Prime Minister Manual Valls are expected to attend a massive march through the center of Paris to honor the victims of those attacks. Israeli Prime Minister Benjamin Netanyahu and Foreign Minister Avigdor Lieberman are among the foreign leaders who confirmed their attendance at the march, the Israeli embassy in Paris announced Saturday. Press reports have said that more than 1 million people are expected.

The vigil outside Hyper Cacher, which was attended by Interior Minister Bernasrd Cazeneuve and Paris Mayor Anne Hidalgo, was preceded by a ceremony at the city hall of St. Mande, a heavily Jewish suburb adjacent to the supermarket.

Speaking at the ceremony in St. Mande, Roger Cukierman, president of the CRIF, France’s umbrella group of Jewish communities, said he hoped 1 million people would attend the march. The ceremony was attended by the municipality’s entire city council.

“Your presence here is a real solace,” he told the hundreds of people who attended the ceremony. “It shows that France remains strong and able to resist the murderers who seek to change our lives – jihadist who attacked the freedom of expression, journalists and Jews – and this after earlier attacks on those they call infidels, including Muslims who, numerically, are probably the main victims of this jihadism.”

The attack on the kosher supermarket was perpetrated by Amedy Coulibaly, a 32-year-old Islamist who was part of the cell of brothers Cherif and Said Kouachi, who perpetrated the Charlie Hebdo attack on Jan. 7. Police surrounded a printing shop north of Paris where the brothers were holed up before breaking in and killing them Friday.