Ariel Kleiman back at Sundance with feature debut, a dark drama 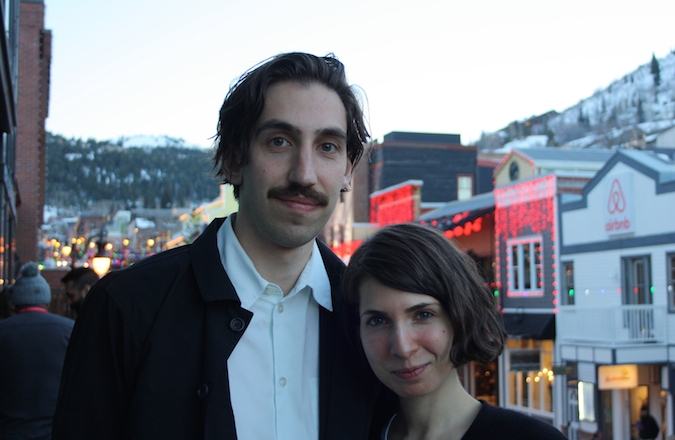 Ariel Kleiman and Sarah Cyngler in Park City, Utah. "Partisan", the feature that Kleiman directed, and co-wrote together with Cyngler, premiered at the Sundance Film Festival. (Anthony Weiss/JTA)
Advertisement

PARK CITY, Utah (JTA) — Sporting a droopy mustache and a sheepish smile, and dressed auteur-casual in a cloth jacket, rolled-up pants and work boots, filmmaker Ariel Kleiman’s appearance does not suggest the savage intensity of his films.

Kleiman, 29, who hails from Melbourne, Australia, made his feature film debut at the Sundance Film Festival on Sunday with “Partisan,” a taut drama he directed and co-wrote about a miniature society that tries to barricade itself against the wider world.

The movie arrives highly anticipated after Kleiman won two awards at Sundance for a pair of short films, and a third for the script that eventually became “Partisan.” Already the feature has received two strong reviews from the respected trade publications Variety and Screen International, and was greeted with enthusiastic applause at the festival screening.

“Partisan” features the French star Vincent Cassel as Gregori, the charismatic leader of a clan of abused women and children, and newcomer Jeremy Chabriel as 11-year old Alexander, Gregori’s beloved adoptive son. Gregori has created a walled compound to protect the clan from the dangers outside while sending the children out to run assassination missions that are never explained. As Alexander comes to question Gregori’s unbending, authoritarian ways, their relationship starts to fray, turning into a high-stakes battle of wills.

It is an assured piece of work, willing to leave pieces of information ambiguous or unexplained, and allowing subtle moments to blossom in their own time. Kleiman himself is slightly less assured, asking a journalist to confirm whether or not a particular plot point is clear. (It is.)

“Partisan” was filmed in Australia and its exterior shots in the former Soviet republic of Georgia. In many ways it echoes Kleiman’s previous short film at Sundance, “Deeper Than Yesterday,” which was set aboard a Russian submarine. Both present claustrophobic, circumscribed worlds where the characters teeter between decency and savagery and the threat of violence always lurks.

Kleiman’s own childhood growing up in Melbourne was, by his own account, far milder, a fairly ordinary suburban life in a middle-class Jewish family. Both Kleiman and Sarah Cyngler, the film’s co-writer and Kleiman’s longtime collaborator and girlfriend, are descendants of Eastern European Jewish refugees. Cyngler’s grandparents survived the Holocaust in what is now Poland, while Kleiman’s parents and grandparents emigrated from Odessa in the 1970s.

Kleiman and Cyngler say it’s possible that their forebears’ travails and subsequent wariness of the wider society had a subconscious influence on their vision of a paranoid man at odds with a hostile world. But they point to other influences as well.

The germ of the story comes from an article they read about child assassins in Colombia. As the idea gestated further, they thought about the fable of the Pied Piper, who leads children away from the world and into his secret cave.

At the same time, they say narrowing the film to such a constrained setting — much like the submarine in “Deeper Than Yesterday” — has practical advantages as well, distilling the story down to its most dramatic elements.

Both “Partisan” and “Deeper Than Yesterday” are, at their root, explorations of man’s basic nature once the ordinary constraints of society have fallen away.

“I guess I’m really interested in animalistic behavior and moments when you catch totally sane people acting animalistically,” Kleiman told JTA. “For me, it’s so sad, it’s so funny, it can be tragic. It’s really fertile ground.”

Cyngler adds, “Maybe we’re just trying to know what the natural instinct of the human being is when they enter an extreme situation, wanting to know whether they’re naturally good or bad.”

The answers they provide are anything but pat. One of the film’s most striking and unexpected aspects is the genuine warmth that Gregori exudes for his family. Far from a cartoonish villain, Gregori clearly adores his charges, Alexander most of all. He tries to lead his band with patience and care, even as he trains them to be killers. Only when his authority is challenged do Gregori’s darkest impulses come to the fore.

“He genuinely loves these kids, and he wants the best for them,” Kleiman explained. “Unfortunately he’s incredibly damaged and seeing things through his warped vision. But his motivations are pure and parental, for the most part.”

Kleiman and Cyngler are uncertain what comes next. “Partisan” has not yet sold to an American distributor, and they have been so intensely focused on finishing the film that they haven’t yet begun to think about the next project. Kleiman says he’s “open to anything.”

“I’m not actually connected to why I’m making a film when I’m making it,” Kleiman told JTA. “It’s very instinctual. As we’re making it, some things feel truthful, some don’t, and we’re just following the most truthful path we can. And then maybe in five years, I’ll realize why I did that.”