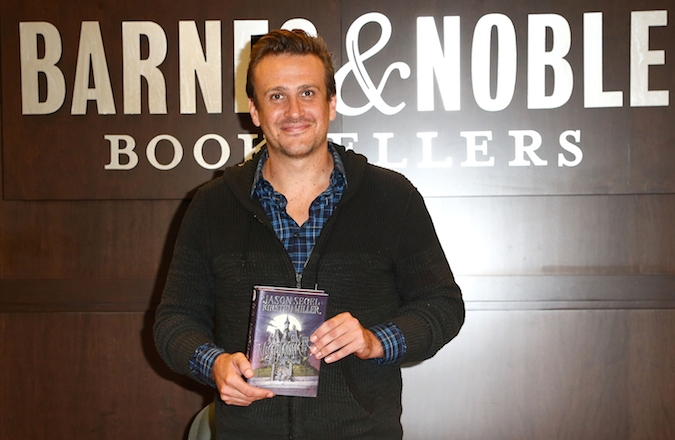 No, the late great writer David Foster Wallace was not Jewish – but the first actor to portray him onscreen is.

Jason Segel, the Jewish actor known for his roles in films such as “Forgetting Sarah Marshall” and “The Five-Year Engagement” as well as the popular TV show “How I Met Your Mother,” plays Wallace alongside fellow Jewish thespian Jesse Eisenberg in “The End of the Tour,” which debuted at the Sundance Film Festival this weekend.

“The End of the Tour” is an adaptation of the book “Although Of Course You End Up Becoming Yourself,” author David Lipsky’s account of a five-day road trip he took with Wallace on a book tour in 1996, just as the publication of “Infinite Jest” was turning Wallace into a literary rock star.

Segel, known almost exclusively as a comedic actor, evoked skepticism among critics when he was cast as the postmodernist author in 2013. In addition, the David Foster Wallace Literary Estate condemned the film last year and said “we do not consider it an homage.” However, after “The End of the Tour” debuted on Friday night at the Park City, Utah festival, some are predicting serious Academy Award attention for Segel (next year, of course — the film does not have a theatrical release date yet).

Eisenberg’s performance is being praised as well, but his talents were already well known after his Academy Award-nominated turn as Facebook founder Mark Zuckerberg in the 2010 film “The Social Network.”

Here is what the critics are saying so far about Jewish David Foster Wallace:

“The revelation here is clearly Segel, who disappears completely into the role of a depressed, reluctant genius.” (A.A. Dowd, The A.V. Club)

“[I]t’s Segel, stepping up his game mightily, who turns The End of the Tour into a feast of subtle fragility. Bedecked in Wallace’s signature head bandana and loose-limbed slovenliness, Segel is totally persuasive as a troubled brainiac, socking over Wallace’s uneven flow of verbiage and melting ever so slightly in the heat of a fanboy-interrogator.” (Joshua Rothkopf, Time Out New York)

“Segel handles Wallace’s intricate, discursive speech with remarkable dexterity, putting Wallace’s brilliant, troubled mind on display for all of us to admire, while still managing to play a human being. That’s a tricky feat for any actor, let alone one mostly known for a CBS sitcom and a handful of Apatowian comedies.” (Richard Lawson, Vanity Fair)

“This is a man of endless contradictions; he’s shaggy and sleepy-headed but sharp and always questioning, wryly candid but then unexpectedly defensive and guarded. The performance is easily Segel’s best work since Freaks and Geeks, devastating strictly on its own quiet terms.” (David Rooney, The Hollywood Reporter)