What Jewish ethics tell us about Deflategate 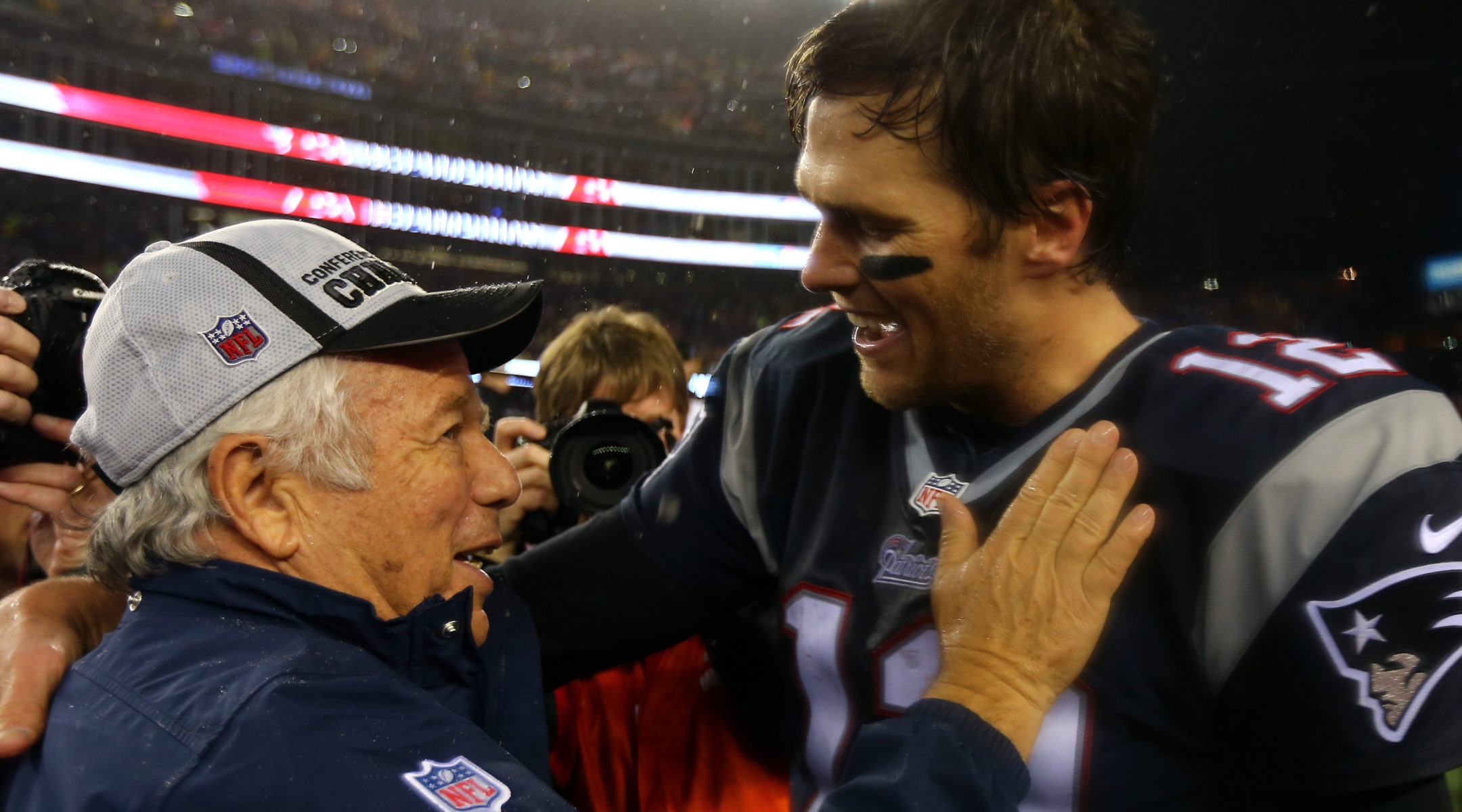 New England Patriots quarterback Tom Brady and owner Robert Kraft are all smiles after being the Indianapolis Colts, but will a Super Bowl victory be tainted by "Deflategate"? (Elsa/Getty Images)
Advertisement

(JTA) – Deflategate, the controversy surrounding the New England Patriots that has made national news, made its way to a Houston business conference led by a rabbi.

Rabbi Yossi Grossman, dean of the Jewish Ethics Institute, on Monday transformed the football prattle into a high-minded look at ethics on the playing field in his bimonthly talk before some city businesspeople. To make his points, he cited the Exodus story, Talmud, the rabbinic authority Rabbi Moshe Feinstein, the Code of Jewish Law and prohibitions against theft of money and of mind.

“The question is, who was actually committing fraud here? Was it the quarterback, the coach, the owner?” Grossman asked.

Discussions of right and wrong in sports typically tend toward on-field strategies: a baseball manager yanking a starter or a football coach opting for a field goal rather than a first down.

Rarely do ethical dilemmas enter the discourse, at least to the degree of Deflategate — allegations that the Patriots had deflated footballs to gain a competitive advantage during their Jan. 18 victory over the Indianapolis Colts in the AFC championship game. Their 45-7 victory earned the Patriots a trip to the Super Bowl on Sunday against the defending NFL champion Seattle Seahawks.

The controversy appears to stretch toward the scandal summit that over the past decade has witnessed revelations of steroids’ prevalence in Major League Baseball and bicyclist Lance Armstrong’s doping, to cite two extremes.

To Rabbi David Hoffman, who teaches a course on business ethics at New York’s Jewish Theological Seminary of America, Western civilization and traditional Judaism codify ethical behavior, regardless of setting.

“Rules governing truth telling, honesty and misrepresenting ourselves are as applicable in sports as they are in business or other aspects of human relationships,” Hoffman said.

The Talmud’s prohibition on “misrepresenting” oneself is a bit tricky in sports, though. Diving outfielders and wide receivers routinely attempt to draw favorable rulings even knowing that a ball has hit the turf. Catchers “frame” pitches off the plate to induce strike calls.

Such efforts often earn fan praise; rarely do they prompt castigation for trickery. In any case, such deception violates nothing in their sports’ rulebooks and no punishments are risked.

In a juxtaposition at the Australian Open just days after Deflategate broke, an unranked American tennis player, Tim Smyczek, motioned to the chair umpire to allow the highly favored Rafael Nadal to retake his first serve after a heckling fan caused a disturbance. Smyczek wound up losing the pivotal point in the fifth set of the second-round match.

His actions sparked talk on sports radio about the merits of sportsmanship, including whether Smyczek unnecessarily exhibited fair play and even whether Nadal should have declined the waiver. But the discussion occupied a far different place on the sports-ethics spectrum than Deflategate.

In Judaism, Hoffman said, the rule is clear: Tell the truth.

“Lying and misrepresenting are bad anywhere, and we know it,” he said. “We want one area of our life to be pure, and we hope that’s sports.”

Hoffman emphasized that with the National Football League’s investigation continuing, he’s not suggesting that the Patriots are guilty of violating rules or of lying to present a false image of compliance. Nor in Houston was Grossman jumping to conclusions about whether the Patriots, who were punished for violating league rules by filming an opponent in 2007, did anything untoward against the Colts.

If New England created an unfair advantage to reach the Super Bowl and then proceeds to defeat Seattle, its punishment could be a championship tainted in many sports fans’ eyes, Grossman said. That is akin, he posited, to Pharaoh’s surviving the 10th plague only to endure the humiliation of the Jews’ exodus and his military’s destruction at the Red Sea.

The discussion made Scott Asarch, an insurance benefits manager, ponder the Torah’s and rabbinical decrees on acceptable lengths to which “you can push the envelope,” he said.

Asarch told Grossman at Monday’s study session that the Patriots — who have a Jewish owner, Robert Kraft — did not violate NFL rules because the balls’ air pressure fell within league guidelines.

“As a fan, I don’t have a problem with gaining a competitive advantage without breaking the rules,” Asarch said later. “You’re doing a better job.”