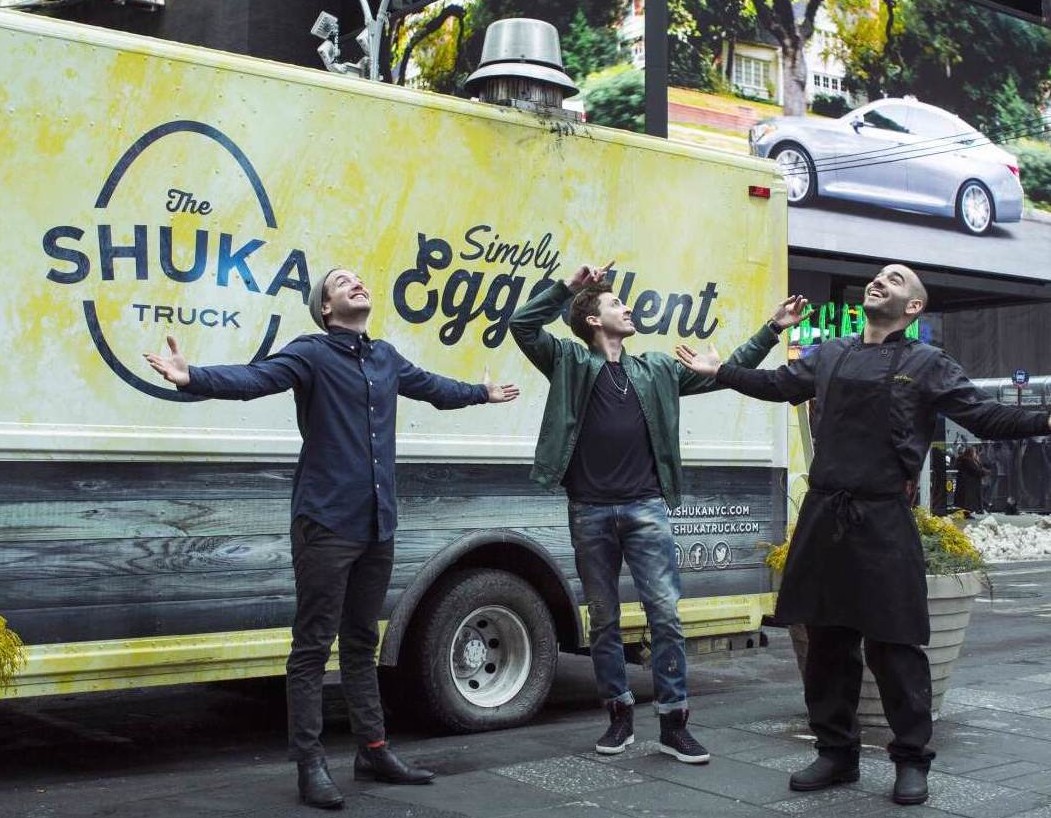 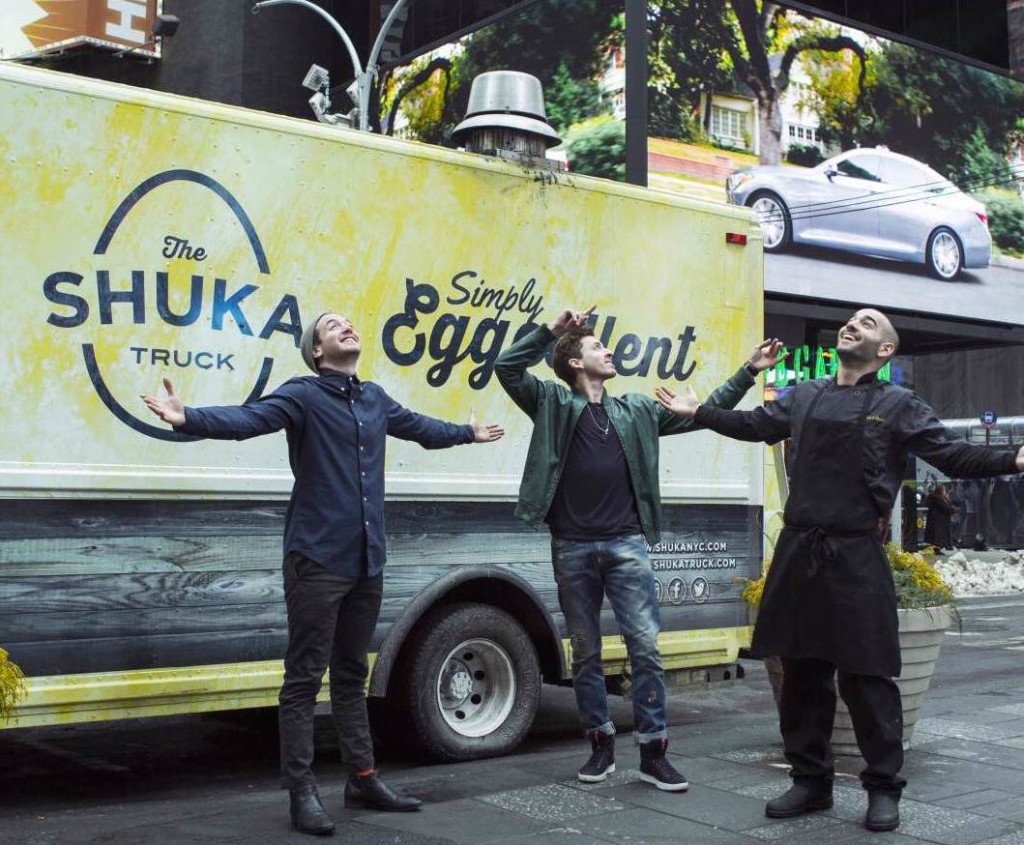 NEW YORK (JTA) — Just over a year ago, Israeli friends Josh Sharon, Solomon Taraboulsi and Gabriel Israel moved to New York to pursue professional dreams: Sharon and Taraboulsi to prove themselves in real estate, and Gabriel to attend the Culinary Institute of America in Hyde Park, N.Y.

Instead, the twentysomethings may have found something even better: serving up shakshuka, the Middle Eastern egg-and-tomatoes dish, on the streets of Manhattan. The three childhood friends from suburban Tel Aviv launched The Shuka Truck in December, and it is already generating an array of media coverage.

I first tasted their original creations, which are kosher (supervised by Rabbi Shaltiel Lebovic of Go Kosher), several weeks ago. The shakshuka was perfectly cooked, well seasoned and emerged from the truck piping hot accompanied by an impressively diced Israeli chopped salad. I had to know more, so I sat down with Israel and Sharon, both 23, to hear their story; Taraboulsi, 24, was unable to join us. The interview that follows has been condensed and edited.

JTA: Where did the idea for a shakshuka truck originate?

Israel: When I got to America, I started at the Culinary Institute of America but left very quickly and then was working at Boulud Sud [an upscale Mediterranean restaurant in Manhattan]. Well, I was making the shakshuka for brunch service on Saturdays and Sundays, the other cooks even started calling me Shuka, and then the idea came to me one day. The only kind of Israeli street food widely sold in New York is falafel. So I thought, let’s do shakshuka.

Sharon: I remember when he called me with the idea for this. We immediately understood the opportunity – Gabriel is really the visionary, and Solomon and I are the implementers. But then it took six months to put together all the logistics. The most challenging part was finding food suppliers with the right ingredients for us. 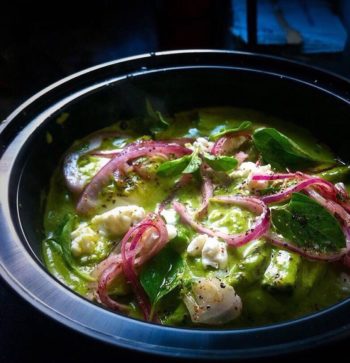 Where do you get your ingredients?

Israel: We want to buy the best products we can find within our budget and want to support local farms as much as possible. Our eggs are organic, free range from Pete and Gerry’s. We also get specialty ingredients from abroad because the quality in the U.S. is just not the same — we get the tahini from Lebanon and the za’atar and olive oil from Israel. In fact, we get most of our spices from Israel.

Whose recipes are you using?

Israel: They are all my own. The red shakshuka is just traditional. But I had to do something different as well. My family is originally French-Algerian, and so I wanted to pull a little inspiration from my roots. The green shakshuka is actually a mousse made with spinach, asparagus, pickled onion, zucchini and goat cheese with honey. The white shakshuka also has French inspiration with charred eggplant, onion and blue cheese, but it has a bit of Middle Eastern flair with cumin, za’atar and fresh oregano.

Has there been anything that has surprised you since your launch?

Sharon: We never expected such overwhelming support from the Jewish community for what we are doing. Most of our clientele has been Jewish or Israeli, but they are also bringing their friends from their offices to try shakshuka for the first time.

Israel: Being here in New York has made us feel even more Jewish because of this support. We’ve also been surprised by the support from others in the food business. We expected people to be competitive, but everyone really helps one another.

Why do you think there are so many Israelis now involved in the New York food scene, like Einat Admony of Balabusta and Uri Scheft of Breads Bakery?

Sharon: It seems there is growing popularity for Mediterranean and Middle Eastern food in New York, so Israelis like us are really seizing this opportunity to open new businesses.

Are there any food trucks in Israel?

Israel: There are a few kinds of trucks/trailers for parties, but there is no food truck scene the way there is here. But what happens in New York and America often influences trends in Israel, so at some point, yes, I think there will be.

What do you guys do in your free time?

Sharon: Solomon and I like working out, walking around New York City to see new things and going out at night. Gabriel spends a lot of time with his girlfriend (sorry, ladies), loves to draw and work on new dishes for the truck, of course.

What’s next for The Shuka Truck?

Israel: It’s too soon to say for sure. We would like to see Shuka as a bigger brand, perhaps expanded in other parts of the country or even Israel. When we started, we had this thought and kept it in mind when we decided on the name, the logo, design, menu, everything. But for now we are planning our summer menu, which will be nice and fresh with some updated salads and maybe some fun drinks, too.

I couldn’t get any recipes out of the Shuka guys, but Israel did share some tips for making great shakshuka at home:

• Char your peppers and then peel the skin before you put them into the sauce.

• Toast all your spices in a pan on medium heat before putting them into the sauce.

• Flavor your sauce with honey instead of sugar to cut the acidity of the tomatoes, but also add fresh lemon juice.

The Shuka Truck stops at various sites throughout Manhattan Sunday through Friday. Updates and schedule are posted on Facebook.