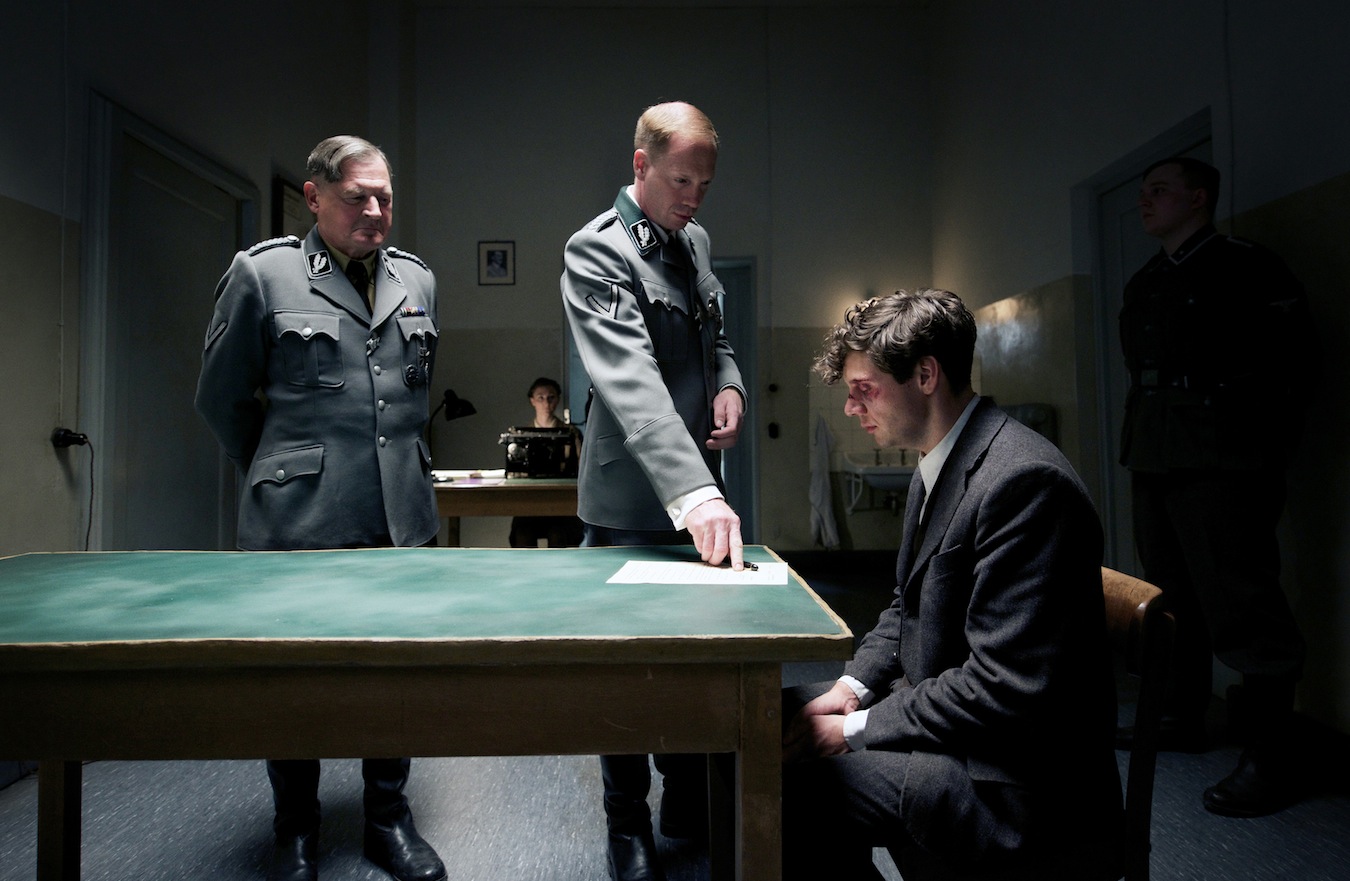 The first, a 1907 painting by Austrian artist Gustav Klimt, is the centerpiece of “Woman in Gold,” a film starring Helen Mirren that had its world premiere last week at the Berlinale International Film Festival.

The second, of activist Georg Elser, who sought to assassinate Hitler in 1939 and paid for the attempt with his life, has been retold in a new German production, “Elser: 13 Minutes,” that also had its world premiere at the festival.

Neither film was up for an award at the Berlinale. But the fact of their premieres in Germany shows how the Nazi past remains a subject of intense interest here nearly 70 years after the end of World War II.

Watching these films at the Friedrichstadt Palast theater, it was easy to forget that, according to a recent poll, 58 percent of Germans think it’s time to put the past behind them.

“Woman in Gold” tells of the struggle for a small measure of justice decades after the genocide of European Jewry and the plundering of their property. The title refers to the art nouveau painting “Portrait of Adele Bloch-Bauer I,” which hung for decades in the Belvedere Palace museum in Vienna before it was restituted to Maria Altmann, Bloch-Bauer’s niece.

Mirren adopts a nearly flawless Austrian-accented English in her portrayal of Altmann, who fled the Nazis with her husband only to return decades later seeking the restitution of Klimt’s portrait of her aunt.

Maria faces stony refusals from Austrian museum authorities and nearly gives up, but her lawyer, Randol Schoenberg (played by Ryan Reynolds), and a young Austrian journalist, Hubertus Czernin (Daniel Bruhl), urge her to fight on. Eventually the painting is returned to Maria, who admits that her “mistake was thinking it would make everything all right, make it better.”

The return of great works of art to their rightful heirs has not been a frictionless process for Austria or Germany. Given that the film begins with Klimt applying gold leaf to his portrait of Bloch-Bauer, one might think that it would feed stereotypes about greedy heirs seeking to rob Austria of its cultural heritage.

But the screenplay by Alexi Kaye Campbell confronts these notions directly. In a wrenching flashback scene of the family’s final parting, Fredrick “Fritz” Altmann (Max Irons) reminds the young Maria of how his Jewish family started in Austria with nothing.

“We did everything we could to contribute and belong,” he says, asking one thing of his daughter: “Remember us.”

Remembrance is also a theme of “Elser: 13 Minutes,” which reconstructs the life and death of Georg Elser (Christian Friedel), a young Bavarian carpenter who became convinced that the top Nazi leadership had to be eliminated to end the war. The film is to open in German cinemas in April.

Elser involved no one else in his plot. He built and tested a bomb, and on Nov. 8, 1939 — two months after Germany invaded Poland — placed it behind Hitler’s lectern at a Munich beer hall. Hitler left the building 13 minutes earlier than planned, a gap that gives the film its title. Seven others in the hall were killed after Hitler was already out of range.

Bungling his escape, Elser was captured and tortured before confessing. But the torture did not end there. His interrogators — among them Arthur Nebe (Burghart Klaussner), chief detective in the Reich Security Head Office — were ordered to find out who else was involved in the plot and continued the beatings until they become convinced that Elser had acted alone.

Ultimately, Nebe himself, who is considered to have been sympathetic to Elser, though he was also commander of a Nazi death squad, is hung as an alleged member of the 1944 Claus von Stauffenberg plot against Hitler. In a grueling scene, we witness his hanging from behind. For more than a minute Nebe twitches, suspended from a piano wire in the Plotzensee prison in Berlin, while an official Nazi cameraman films the scene for later propaganda use. Some 5,000 filmed executions actually took place there.

After last week’s screening, director Oliver Hirschbiegel defended the graphic scene as a statement against the death penalty. He also said that the extensive depictions of Elser’s beatings were intended to demonstrate how torture “turns a human into an animal.”

But his main aim was to elevate Elser, whose act of defiance had been put on the back shelf after the war.

Elser was “less interesting than the noble von Stauffenberg, but he was the first true resister who said this has to be stopped,” said Hirschbiegel, whose 2004 film about Hitler, “Downfall,” was nominated for an Academy Award.

Screenwriter and producer Fred Breinersdorfer, who came of age in the 1960s when German students were angrily challenging their parents’ generation over Nazi crimes, said the film grew out of that conflict.

“It’s a confrontation that will not end,” Breinersdorfer said. “People from the resistance were still considered to be traitors after the war, and this is still the case today.”

“Woman in Gold,” on the other hand, needed no scenes of savagery; the violence is implied through its contrast with the beauty of the painting. In the huge movie theater in the former East Berlin, many wiped away tears during the scene of final parting. Applause began with the first rolling credits and did not end until the lights went up.

Even though he found some of the characters to have been caricatures, one audience member told JTA that he wants to see the film again – this time with family and friends.

Alexander Ferwer, 40, a Cologne businessman, said he “can’t understand” why some Germans say they have heard enough about this history.

“That’s really bad,” he said. “I think there can’t be enough films about this time. … It has to never be forgotten.”