For Russia’s Jews, Nemtsov murder is reminder of their vulnerability 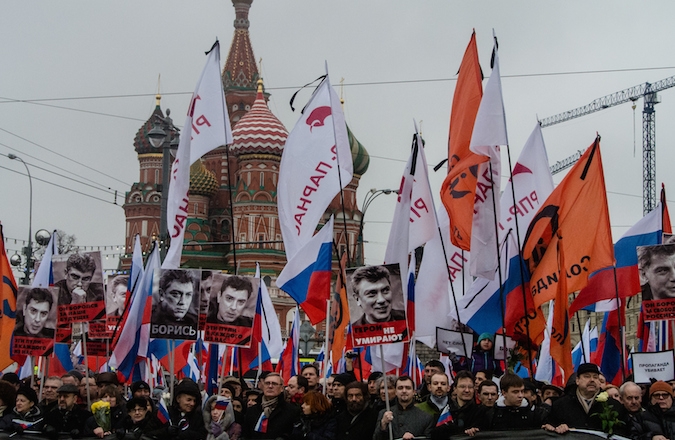 Tens of thousands marched in Moscow on Sunday to protest the murder of Boris Nemtsov. (Alexander Aksakov/Getty Images)
Advertisement

A Jewish scholar of education from St. Petersburg, Zicer, 55, has limited hope for change in a country that is ranked 148th in the Press Freedom Index and where several of Putin’s critics have either died under mysterious circumstances or been jailed for what they and many Western observers say are trumped-up corruption charges.

On Sunday, however, Zicer marched through St. Petersburg with 10,000 people, many of them Jewish, in protest of the murder in central Moscow of Boris Nemtsov, a former deputy prime minister. Nemtsov, an opposition leader, was gunned down on Saturday just hours after he urged fellow citizens to attend a rally against Russia’s involvement in the war in Ukraine.

No arrests have been made in the killing, which took place on the first anniversary of Russia’s invasion into Crimea. Russia has since annexed the Crimean Peninsula.

“This murder and the incitement that preceded it is so shocking that I could no longer remain an observer,” Zicer said.

Whether or not the Kremlin ordered the killing, as some have accused, Zicer holds the Russian president responsible because of the “the wild incitement he allowed on media in recent months against Nemtsov and other opposition figures.”

Kremlin spokesmen have denied any involvement in the slaying.

To many Russian Jews, the murder of Nemtsov — a physicist turned liberal politician, born to a Jewish mother but baptized in the Orthodox Church — is a troubling reminder of vulnerability as members of a relatively affluent minority with a history of being scapegoated, strong ties to the West and a deep attachment to cosmopolitan values and human rights. 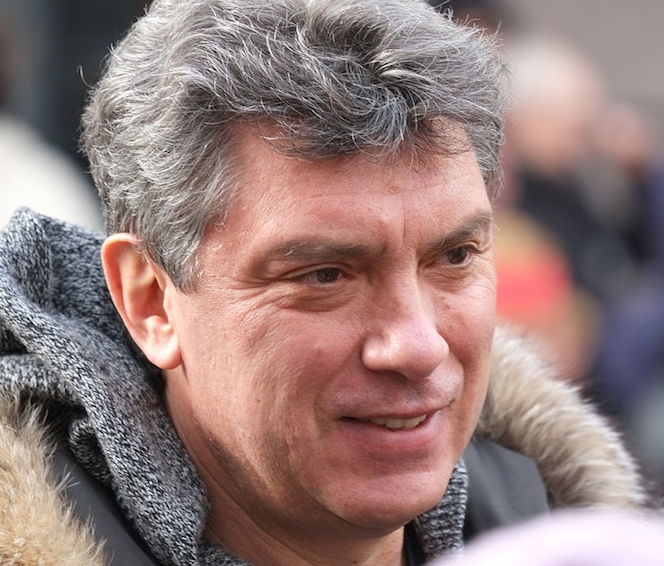 Boris Nemtsov was shot dead on Feb. 28, 2015, hours after urging his fellow Russians to attend a rally against their country’s involvement in the war in Ukraine. (Wikimedia Commons)

The murder hit Russia’s sizable Jewish intelligentsia particularly hard because “nearly all the leaders of the liberal opposition are either fully Jewish or have Jewish background,” said Michael Edelstein, a lecturer at Moscow State University and a writer for the Jewish monthly magazine L’chaim. “His murder is the low point in a process that started about two years ago which has left the Jewish intelligentsia and its milieu feeling more uneasy than ever before in post-communist Russia.”

To be sure, Nemtsov’s murder shocked countless Russians the world over, prompting vigils and marches in his memory. The main march in Moscow drew 60,000 people, but smaller events were held across the federation for Nemtsov, who at one time was second in command to Putin’s predecessor, Boris Yeltsin, but ultimately was eclipsed by Putin before becoming one of his harshest critics.

In an interview conducted with Newsweek hours before his death, Nemtsov said that because of Putin’s policy, Russia’s economy is collapsing.

Russia’s support for separatists in Ukraine was “wading into a costly, fratricidal war in Ukraine and into pointless confrontation with the West,” Nemtsov told the magazine.

“We all feel the effects of this insane policy,” Nemtsov said, adding that Putin’s use of media reminded him of the Nazi propaganda chief Joseph Goebbels.

Putin responded to such criticisms by referring to opponents of Russia’s actions in Ukraine — and especially the annexation of the Crimean Peninsula — as a fifth column. And though Putin did not name Nemtsov, the president was widely thought to be referring to him, the liberal camp’s most senior politician. Russian media considered to have close Kremlin ties published Nemtsov’s name on lists of suspected traitors that started circulating shortly after those included on the lists expressed their opposition to Russia’s annexation of Crimea in March 2014.

In a 2010 televised interview, Putin said that Nemtsov and other opposition figures stole billions from Russians and would “sell off the whole of Russia” if given the chance.

“Nemtsov was on every list of traitors published on the Internet and aired on state TV,” the Russian-Jewish journalist Leonid Bershidsky wrote on Bloomberg View after the murder.

Bershidsky added, “It did not help that he was Jewish. There was a strong undercurrent of anti-Semitism in the smear campaign.”

However, some Russians doubt that Putin would go to the trouble of ordering the assassination of a high-profile figure who ultimately may be more trouble dead than alive. Nemtsov, after all, had failed to gain widespread popularity outside the urban elite and thus never constituted any real political threat to Putin.

Edelstein noted that “there may have been anti-Semitic incitement online and in far-right circles,” but “Nemtsov wasn’t perceived as a Jew and wasn’t attacked as such.”

The evidence in Nemtsov’s killing, Edelstein believes, “points to ultranationalists, perhaps militiamen who fought in Ukraine, perhaps only their sympathizers.”

Nemstov himself was open about being born to a Jewish mother and said he rarely felt any discrimination.

“People tend to judge whether you are a thief or honest, competent or not,” he said during an interview in 2001 when he was asked about his Jewishness.

Raised by a single mother, Dina Eydman, a physician, in the Black Sea resort town of Sochi and later in her native Nizhni Novgorod, 250 miles east of Moscow, Nemtsov received his doctorate in theoretical physics at 26.

“I never made it a secret that my mother is Jewish because I love my mother. I’m much indebted to my mother,” he was quoted as saying in a 1999 report about anti-Semitism in Russia. “She has also drawn me into politics, though now she is not happy about this.”

In a telegram he sent Nemtsov’s 87-year-old mother, Putin wrote, “Everything will be done so that the organizers and executors of this vile and cynical murder are punished.”

For Tanya Lvova, a Jewish mother from St. Petersburg and coordinator of the city’s Limmud conference on Jewish learning, said Nemtsov’s murder “does not make life more uncomfortable here because it is already as uncomfortable as can be.”

But Lvova said the killing does present her with a new concern.