In Israeli election, it’s all about Bibi 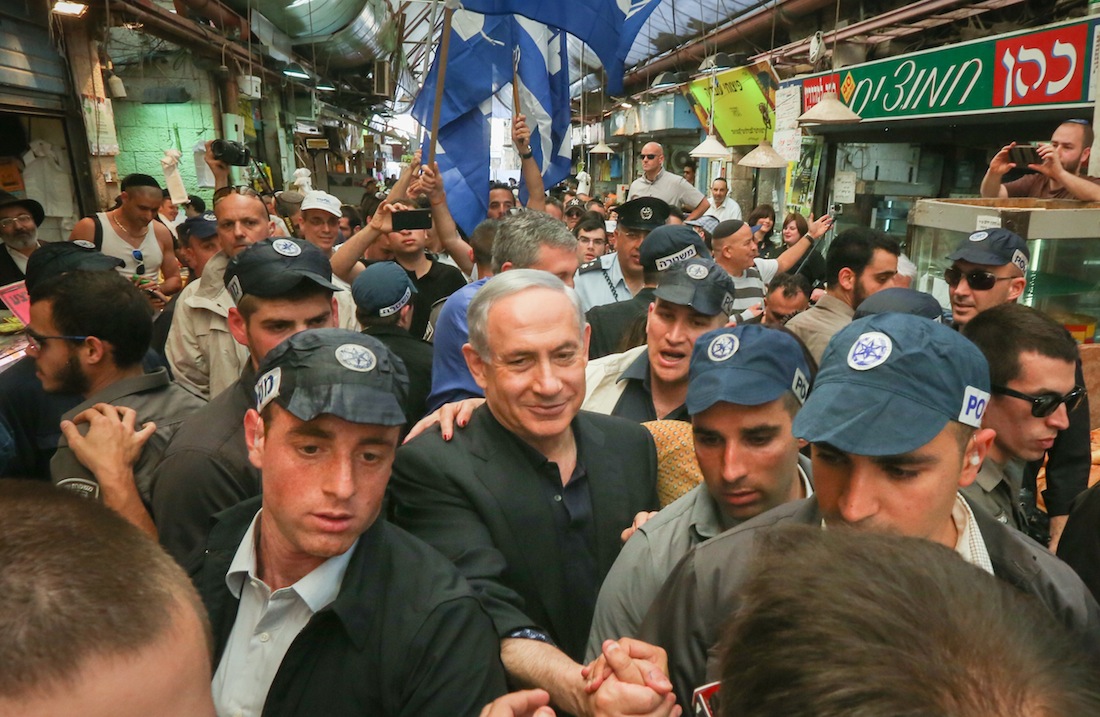 TEL AVIV (JTA) — However much they disagree with his policies, opponents of Israeli Prime Minister Benjamin Netanyahu would surely admit he was right about one thing: These elections are all about him.

When he called for new elections in December, Netanyahu said the vote would enable him “to gain the trust of the nation.” Since then, the campaign’s central question is whether he has that trust.

Both his Likud Party and the party best poised to defeat him, the center-left Zionist Union, have focused their messaging on the prime minister’s record and fitness for leadership — or lack thereof. Parties closer to the ideological extremes have argued that a vote for them will either strengthen or weaken Netanyahu’s reelection prospects.

A national campaign to “change the government” has put out ads attacking Netanyahu’s record. And when 40,000 people amassed in this city’s Rabin Square on Saturday night calling for a change in government, ousting Netanyahu was the focus. The keynote speaker was former Mossad chief Meir Dagan, a respected general and harsh critic of Netanyahu’s handling of the Iranian nuclear threat and the Israeli-Palestinian conflict.

“Six years Mr. Benjamin Netanyahu has served as prime minister,” Dagan said in his speech. “Six years in which Israel has never been stuck as it is now. Six years he hasn’t led any real move to change the face of the region or to create a better future.”

Despite the campaign against him, Netanyahu stands a good chance of being reelected. Likud and Zionist Union have been neck and neck atop the polls for months, and Israel’s right-wing bloc is considerably larger than its left-wing counterpart. A poll by Israel’s Channel 2 earlier this month found that 47 percent of voters say Netanyahu is best suited to be prime minister, with only 28 percent choosing Zionist Union’s co-chairman Isaac Herzog. A Haaretz poll from late February found that voters trust Netanyahu more than Herzog by a wide margin on diplomacy and defense, and that 51 percent of respondents predicted that the prime minister would be reelected.

Netanyahu has sought to make his perceived forte — national security — the election’s central issue. His speech to a joint session of the U.S. Congress on the dangers of Iran’s nuclear program achieved that goal for a few days, landing Iran on Israel’s front pages.

“There’s no doubt that the pictures of Congress giving a standing ovation can have a positive influence on the voters,” said Efraim Inbar, director of the Begin-Sadat Center for Strategic Studies. “I think some Israelis are proud of their prime minister and wanted him to go to Washington and say there are essential interests we need to stand by, and that we don’t capitulate.”

But the chance to showcase his strength on a prominent congressional stage has also cost Netanyahu. The weeks leading up to the speech saw a range of Israeli politicians, including some former allies, criticize him for damaging U.S.-Israel relations.

And then there are the other controversies.

Netanyahu and his wife, Sara, have been forced to fend off a series of allegations that they overspent public funds at their private residences on ice cream, alcohol and other luxuries. In February, the state comptroller published a report blaming Netanyahu for not adequately addressing skyrocketing housing prices, one of the campaign’s burning issues. A Likud campaign ad this month seen as insulting to Israeli port workers, historically one of the party’s key constituencies, has further placed the prime minister on the defensive. And on March 6, the Israeli daily Yediot Acharonot reported on a 2013 document showing that Netanyahu had offered far-reaching concessions in talks with the Palestinians, undermining his right-wing bona fides.

Likud officials have responded by doubling down on the party’s historic opposition to Palestinian statehood and support of West Bank settlement. A Likud statement later that day called Netanyahu’s 2009 speech supporting a Palestinian state “null and void.” Senior Likud lawmaker Yuli Edelstein told reporters on Sunday that Likud’s “common denominator” is supporting continued settlement in Jerusalem and the West Bank.

Herzog has seized on the prime minister’s troubles by positioning himself as the anti-Netanyahu. His campaign has referred to Netanyahu’s three terms in office as “nine years of nothing.”

In recent weeks, Netanyahu’s public statements have looked like a list of defenses against the controversies that have embroiled him. But even as he parries, the incumbent has aimed to frame his resoluteness against attacks both domestic and foreign as yet another testament to his leadership.

“I stand strong against international pressures in everything connected to Israel’s security,” Netanyahu wrote on Facebook on Feb. 24, pledging not to join a unity government with Zionist Union. “They’re ready only to give in, to capitulate, to retreat, to surrender.”