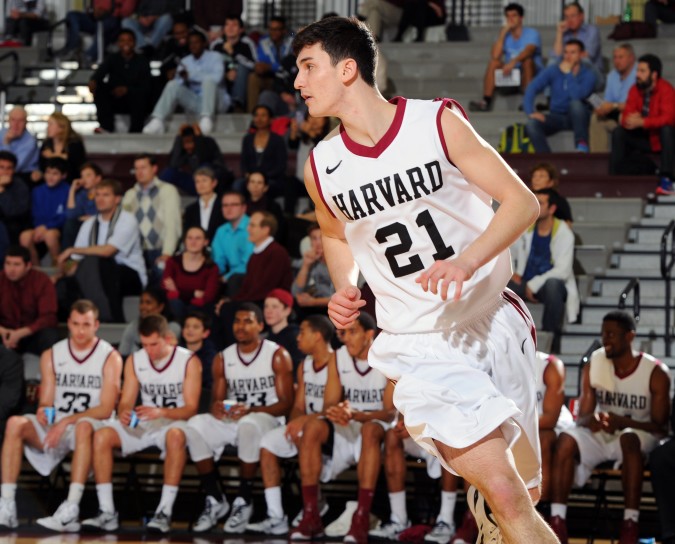 Zach Yoshor in action for Harvard against the University of Houston, Nov. 25, 2014. (Harvard Athletics/Gil Talbot)
Advertisement

(JTA) – Should Harvard upset North Carolina in the opening round of the NCAA Men’s Basketball Tournament, Zach Yoshor will stay with the Crimson for their next game two days later – but the freshman guard acknowledges it won’t be easy.

The Ivy League champs would be playing the Arkansas-Wofford winner on Saturday, the Jewish Sabbath.

Raised in an observant home in Houston, Yoshor attended a Jewish school, the Robert Beren Academy, that doesn’t schedule games on Shabbat. Three years ago, during Yoshor’s junior year, Beren attracted national headlines when it nearly had to forfeit a state tournament semifinal originally set for a Saturday.

As a member of a non-Jewish travel team in those years, Yoshor walked to Saturday games. At Harvard, though, he had to choose; basketball won out.

“It was a really rough decision. I just decided it was something I wanted to do,” Yoshor explained by telephone on Monday. “I knew if I wanted to play, I’d have to travel on Shabbat.”

It’s a decision with which he remains uncomfortable, Yoshor admitted. For Harvard basketball games occurring on Shabbat, he keeps religious violations to the bare minimum by refraining from using his cellphone or writing. Twice this season he has flown separately to games to avoid taking team flights occurring on Shabbat. On team bus rides he reads books to pass the time.

Harvard punched its ticket to the NCAAs in dramatic fashion on Saturday: Steve Moundou-Missi drained a jump shot in the closing seconds to defeat rival Yale for the Ivy League title and the automatic bid.

Yoshor, sitting on the bench, leapt with joy.

“When Steve hit that shot, we all went crazy,” he said. “It was a very emotional experience.”

The Crimson, seeded 13th in the West Region, will play fourth-seeded North Carolina, a perennial power out of the Atlantic Coast Conference, on Thursday in Jacksonville, Fla.

“It’s remarkable, like a dream come true growing up and watching March Madness,” Yoshor said. “I always had this dream of playing in the Ivy League. I understood, as I grew up, that I’d have this opportunity.”

Yoshor is unlikely to see court time against the Tar Heels. He played in only nine games this season and scored 11 points, all in an easy victory over St. Rose.

Studying last year at Bar-Ilan University in Israel, Yoshor stayed in game shape by working out and practicing with the Israeli professional team Ironi Ramat Gan, an arrangement first cleared with Harvard to assure that his eligibility for college basketball would remain intact.

As a standout at the Beren Academy, Yoshor first attracted the attention of Adam Cohen, an assistant coach at Rice University, also in Houston. The summer after graduation, the now 6-foot-6 Yoshor attended a basketball camp at Harvard, where Cohen had moved on to work.

“I saw Zach at his high school at practice and was impressed: He had good size and could shoot the ball,” said Cohen, who’s also heading to postseason play, in the National Invitation Tournament this week, with his new employer, Vanderbilt University.

Cohen said Yoshor “had the ability, as well as the grades” to play at Harvard, adding that Yoshor could crack the Crimson’s rotation as a sophomore if he continues to develop.

“He’s got a big summer ahead of him,” Cohen said.

Yoshor said his coaches and teammates were understanding about his missing practices for the High Holidays. A kosher observer, he makes do on road trips with tuna sandwiches and salads.

“It’s a point of curiosity,” he said. “They’ve been very respectful, very accommodating. If I ever ask for anything, they’re very quick to oblige.”

Harvard’s other demands took some adjustment for him.

“It was rough for me at first,” Yoshor said. “Getting in Division I basketball shape and handling the rigors of academics has been a real challenge, but I felt good when I was able to balance my time at both ends.”

For his NCAA Tournament debut, one of Yoshor’s parents will be in Jacksonville. The other will head to New York to see Zach’s brother Ben, a Beren junior, play in Yeshiva University’s Red Sarachek Basketball Tournament.

The family’s hardcourt prowess is hardly limited to the males. Their sister, Rebecca, graduated from Yeshiva University last year after leading the NCAA – all divisions – in rebounds per game as a senior.

Yoshor’s Beren classmates will be following the Harvard game in Jacksonville, too. No sooner did the Crimson qualify for the NCAAs than his cellphone lit up.

“There were lots of texts from friends about how cool it is,” he said.