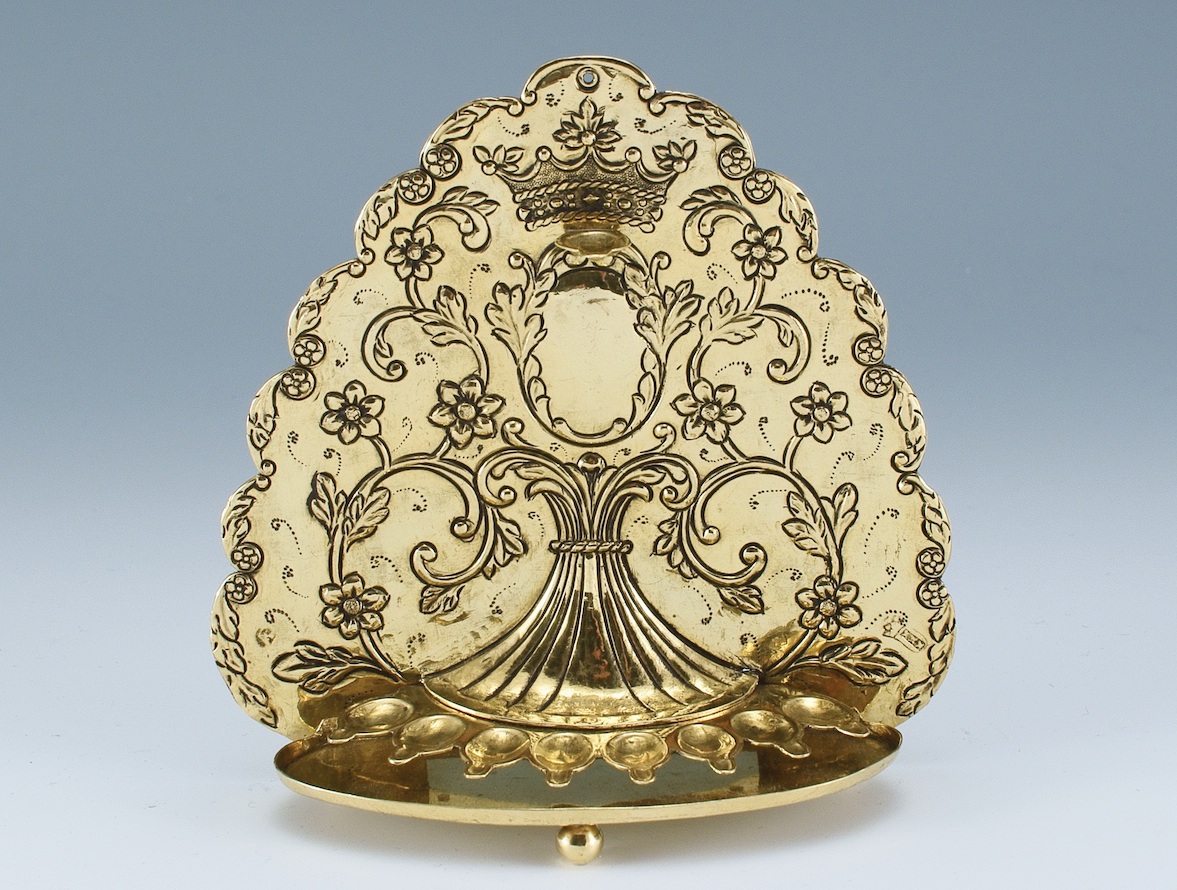 Collector interest in art objects with Jewish content and themes is on the rise at The European Fine Art Fair (TEFAF), a major annual event with nearly 275 galleries selling everything from ancient sculpture to Rembrandt paintings to photography and modern art. The fair, often hailed as the “world’s premier fair for pre-21st century artworks,” held in the southern tip of the Netherlands, runs through March 22.

“Ten years ago there was hardly anything at all, and now there are several stands and some stands with groupings in [Jewish] objects. Clearly that would not be the case if people wouldn’t be buying them,” said Eike Schmidt, the James Ford Bell curator of Decorative Arts and Sculpture at the Minneapolis Institute of Arts.

“People are confronted with an identity that they otherwise wouldn’t think about,” he said. “That might play a role.”

Schmidt points to one particularly impressive example of Jewish art at the fair: what is being billed as a “travelling Chanukia” created around 1710 in Amsterdam by the non-Jewish artist Abraham Effemans. The golden Hanukkah lamp, which is about five inches tall, is on sale at the booth of Amsterdam-based John Endlich Antiquairs.

Dick Endlich, co-director of the gallery, who is also selling a contemporary Hanukkah menorah, a Jewish spice box from 1710, and a yad, or Torah pointer, from 1806, said that ceremonial objects of this sort tend to attract buyers who relate personally to them. “Because they were all made for religious ceremonies, mostly the Jewish people, or museums, are interested,” he said.

Elsewhere at the fair, the London-based Stephen Ongpin Fine Art was selling a late 19th-century painting of Jaffa by artist Gustav Bauernfeind, one of the first European artists to spend time in Jerusalem, Damascus and Jaffa. The work was owned by a rabbi for 40 years, said Ongpin, who has had a couple of inquiries about the painting from Israeli collectors.

And at the booth of Rome-based Alberto Di Castro, which has exhibited at TEFAF for 20 years, Judaica is on sale for the second year in a row. Last year, the entire lot sold out, Di Castro said, noting that the silver seder plates, Jewish book bindings and Elijah’s cup on view in his stall ranged in price from a few thousand Euros to 100,000 Euros each. 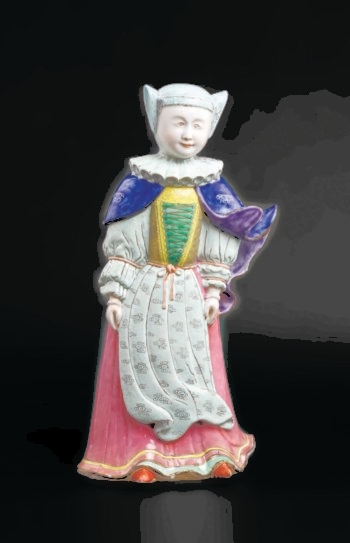 Figure of a standing woman dressed in the formal clothes of the 16th-century Frankfurt Jewish community. (Courtesy of Cohen & Cohen)

The most unique Jewish object at the fair, however, may be what Cohen and Cohen, of the U.K., describe as a rare “porcelain figure of a standing woman dressed in the formal clothes of the 16th-century Frankfurt Jewish community.” The figure was made in China around the year 1740 and was intended for export to either the Dutch or English market.

Frankfurt Jews were required to wear certain identifiable attire, explained Will Motley, researcher for Cohen and Cohen. The piece, he added, came with two accompanying figures: a man and a Turkish dancer. All three command high prices — the one at TEFAF has a tag around 200,000 Euros.

Despite the object’s value, Chinese Judaica export pieces tend to “pass by” most Judaica collectors, according to Michael Cohen, the gallery’s director. “It’s not even on their radar. What I would love is for the Israel Museum in Jerusalem to buy the lady figure,” he said. “It would start to make people realize that there was a strong Jewish connection with the China trade.”