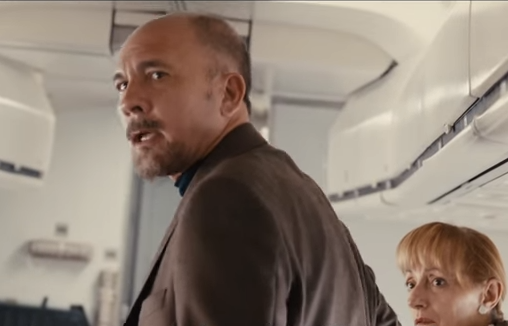 A scene from the "Pasternak" segment of "Wild Tales."
Advertisement

The news that the mentally disturbed pilot of Germanwings Flight 9525 intentionally crashed the plane into a mountainside has horrified people all over the world.

But for those who’ve seen “Wild Tales,” an Argentinian film that was nominated for Best Foreign Language Film in the Academy Awards this year, the news was particularly chilling. That’s because the tragedy was a virtual reenactment of “Pasternak,” the opening segment in the film, in which a pilot with unresolved psychological issues locks himself in the cockpit and crashes a plane full of passengers.

The dark and violent film, whose motto is “we can all lose control,” consists of six independent segments, many featuring Jewish characters and names taken from Buenos Aires director Damian Szifron’s life.

In “Wild Tales,” unlike on the Germanwings flight, the pilot, named Gabriel Pasternak, knows all the passengers on the plane and crashes the aircraft into his parents’ house, rather than a mountain, in an act of revenge. The character’s grievances include being cheated on by his girlfriend, fired from his company, held back in elementary school and bullied as a child. The real Gabriel Pasternak who inspired the name, but not the personality, of the fictional character was someone Szifron, 39, knew from ORT high school, where he studied media production.

In the United Kingdom in particular, where “Wild Tales” was just released last week, many critics and viewers are commenting on the parallels between the Germanwings tragedy and “Pasternak,” On Twitter and in some media outlets, some have speculated that Andreas Lubitz, the German pilot, saw “Wild Tales” and was inspired by it.

It’s terrible but I can’t read about the Germanwings plane crash/suicidal pilot without thinking about the opening segment of WILD TALES.

The Germanwings connection spurred the film’s producers to print the following disclaimer on the film’s website, where viewers can pay to stream the film: “Following the Germanwings flight incident on Tuesday 24th March, please be aware that Wild Tales features a sequence that some customers might find disturbing.” The disclaimer is also being posted outside some theaters where the film is showing.

Even before the Germanwings crash, Argentine media outlet Clarin was finding many real-life parallels to “Wild Tales” and published a list of 10 such incidents

Contacted by JTA, Szifron’s publicist said the filmmaker preferred not to comment about the Germanwings-”Wild Tales” parallels.

Here’s an excerpt from the segment: