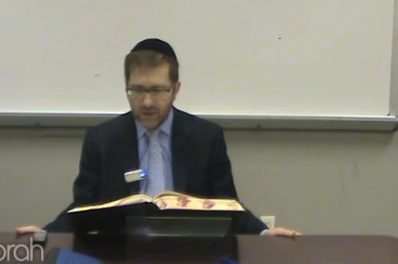 When not running Allese Capital, the fund through which he is alleged to have defrauded investors, Rabbi Marcello “Yair” Trebitsch frequently delivers lectures about Talmud. More than 70 of his Daf Yomi lectures are on the TorahAnytime website. The most recent was posted on April 14, a day after the FBI arrested him. (Presumably he recorded it beforehand.)

Trebitsch is also a guest lecturer on occasion at the Morning Kollel of Young Israel of Midwood, which is near his Brooklyn home. (A podcast posted on March 19 is titled “Reciting Hallel the Night of Pesach.”)

His TorahAnytime lectures, which range from 20 minutes to just over an hour, are designed for observant Jews who study one page of Talmud each day, according to a universal schedule. Truth be told, only those well versed in Talmud will find the lectures accessible. His practice of sitting at a desk, swaying as if praying and gazing down while he talks doesn’t help.

The lectures are a far cry from the episode that a crime show may produce one day based on his case, or even from a TED talk.

Given that Trebitsch’s wife, Michelle, may also be charged and that much of Trebitsch’s notoriety right now comes from having a famous and also criminally charged (in a different crime) father-in-law, it’s worth noting that the tractate Trebitsch has chosen to teach — Ketubot — focuses on the rights and duties of husband and wife.

Bava Metzia, the chapter focusing on fraud, doesn’t come until September 2016. We wonder if Trebitsch will have a lecture on it.