Op-Ed: How to avoid another Yarmouk 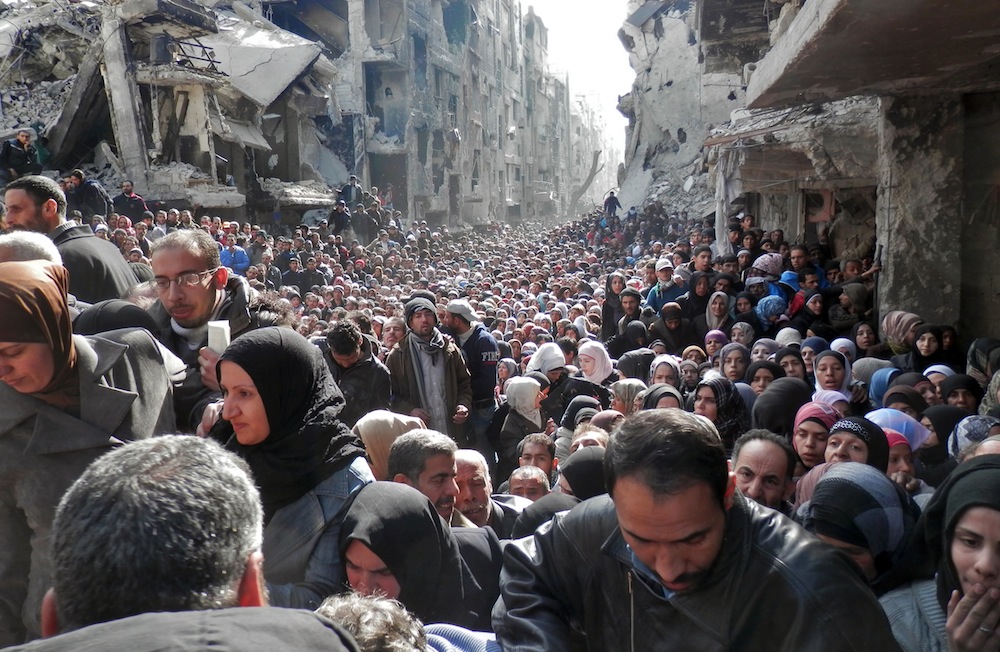 NEW YORK (JTA) — It’s happening again — Palestinian refugees are caught between warring factions in the Middle East and the world is reacting too slowly to their plight.

In earlier times, Palestinian refugees found themselves in the crosshairs at the Sabra and Shatila camps, when Lebanese Phalangists massacred them while Israeli forces stood by. Now it’s the Yarmouk refugee camp in Syria, where militants from the Islamic State have targeted Palestinian civilians in a reign of terror that Ban Ki-moon, the U.N. secretary-general, has called the “deepest circle of hell.”

Some have used the Yarmouk tragedy to point out, appropriately so, that the world is relatively silent about the suffering of Palestinians at the hands of ISIS. The point is made that it is only when the Jews can be blamed for what is happening that the international community rises up. Otherwise it couldn’t care less.

I reach a similar conclusion but from a different perspective. If the world truly cared about the situation of Palestinian refugees throughout the Middle East, it would not wait for a humanitarian crisis to erupt before acting to fundamentally improve their quality of life and end the circumstances that set the stage for these disasters.

Yes, we know the arguments for maintaining the status quo regarding Palestinian refugees. Many of those Palestinians in the camps await the time they can return to their homes in what is now Israel. This, of course, is a non-starter since it has always been clear that this would lead to the demographic demise of the Jewish state. Without denigrating the motives of many Palestinians who long for their old homes, for the Palestinian leadership, the refugee issue has been a primary vehicle for sustaining the war against Israel.

All of which points to one inevitable conclusion that the tragedy at Yarmouk should reinforce: The world needs finally to treat the Palestinian refugee issue like the many other refugee situations that have plagued the world over many decades. The goal must be to end their refugee status as soon as possible. There needs to be international pressure on Lebanon, Syria and other Arab states to dismantle these refugee camps and institute an orderly procedure to integrate Palestinian refugees into their societies.

Integration of refugees is always a challenge and one should never underestimate them — particularly in Syria, which is going through its own hell because of President Bashar Assad’s aggression and the brutality of ISIS. But the idea of dismantling the camps and integrating their residents has never been on the agenda. Now it should be introduced, with the understanding that once there is an independent Palestinian state, some of the former refugees, if not most, might consider moving there.

But the most egregious example of this state of affairs is not in Lebanon or Syria, but in the Palestinian territories themselves. Every time I read about an incident in a refugee camp in the West Bank or Gaza, I can’t help but ask myself: Why are there still camps in territories where Palestinians are in control?

At least in Syria and Lebanon, one must acknowledge the resistance by ruling governments to integrating these outsiders. But in the territories under Palestinian rule, there are no outsiders and nothing to stand in the way of the immediate dismantling of the camps.

Here, more than anywhere, the cynical motives of Palestinian leadership are apparent. Here, where the ability to transform the lives of people living in camps is in their hands, they do nothing. But that is no excuse for the failure of the international community to act.

Let me be clear: None of this is an effort to sidestep the need for renewal of negotiations between Israelis and Palestinians to achieve a two-state solution. That remains an imperative and the best long-term solution for the Palestinians.

But for now, to avoid future Yarmouks, to finally take Palestinian refugees out of this nebulous position they’ve been in for decades, a qualitative change in the international approach must take place.

It is not a simple solution, but it is a beginning for a people who have suffered far too long, with the unfortunate acquiescence of the international community.