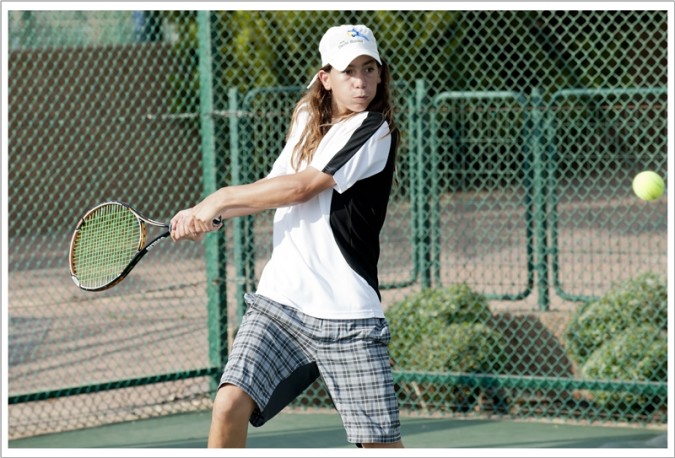 Yishai Oliel is a two-time winner of the prestigious Junior Orange Bowl tournament in Florida, prompting soaring optimism for his future. (Courtesy of the David Squad)
Advertisement

London businessman David Coffer is hoping the Ramle teenager can someday join such heady company — and he’s backing up his dream with the funding to groom the hard-hitting lefty for stardom.

Oliel is the most promising member of the David Squad, a small group of young Israeli tennis players that Coffer finances and manages along with his wife, Ruth, and three children. It picks the nation’s most talented up-and-comers — the five members now range in age from 12 to 16 — who Coffer hopes will soon become household names.

The squad is committed to “developing Israeli tennis players of the highest international standards,” according to its website. Since its launch in 2005, Coffer, the chairman of a real estate advisory firm and owner of the popular Tuttons and Dirty Martini restaurant and bars in London, estimates he has financed 100 children and teenagers.

Coffer, 67, is quick to note that the name “is not a reference to me but to King David, the greatest hero of Israel’s history!”

Djokovic, the Serbian ranked No. 1 in the world, personifies Coffer’s hopes for Israeli tennis: Win lots of Grand Slam titles and woo fans for your country. Coffer dreams of the day when one of his precocious players succeeds on an international level.

“Imagine 8 million Israeli citizens glued to their TV sets and not moving until the final game of Wimbledon is over,” he says. “It would mean so much to have a champion — we will cry with joy.”

Israeli players such as Dudi Sela, Andy Ram, Shahar Peer and Julia Glushko have enjoyed some success on the international level — Ram and Yoni Erlich teamed to win the Australian Open doubles title several years ago — but have never approached the top of the world rankings in singles. Israel was shut out in its latest Davis Cup match this year.

Oliel provides some optimism. The long-haired 15-year-old has made his mark already by twice winning the prestigious Junior Orange Bowl tournament in Florida — only the ninth player in the competition’s 70-year history to accomplish the feat.

“Yishai has amazing grace and timing and hates to lose,” Coffer says.

He recalls when Oliel was 11 and playing a tournament in Andalusia in 110-degree weather. The boy was on the verge of being shut out in straight sets.

“We encouraged him to take a rest,” Coffer says, “but Yishai cried ‘I am staying’ and ended up winning one game in the third set.”

Along with developing champions on the court, the David Squad also aims to create a good name for Israel, says its managing director and head coach, Andy Zingman, a former Argentine tennis player, “all without political involvement.”

“This can be an important technique to change perceptions,” Zingman says. 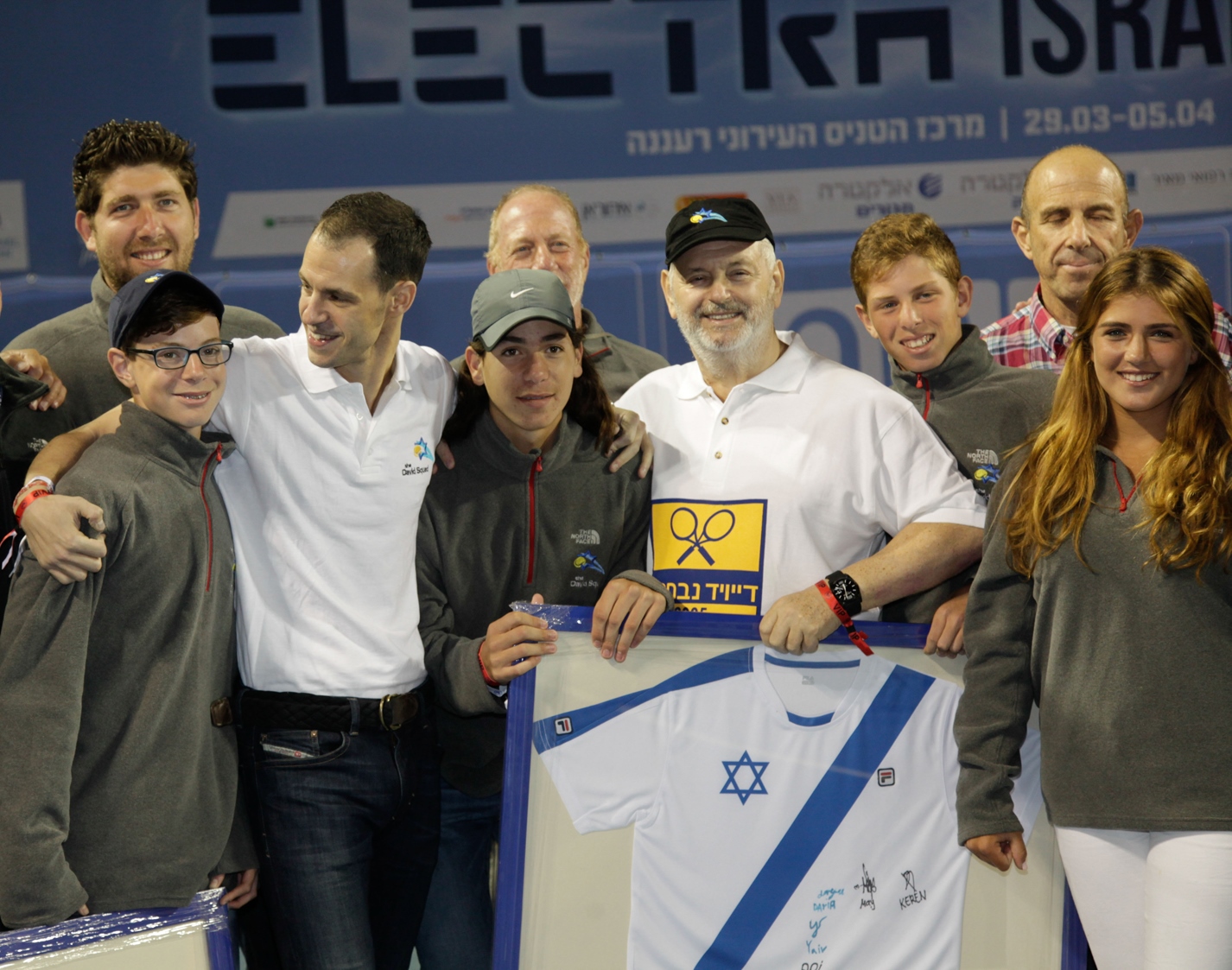 David Coffer, in black hat, at ceremony in Raanana honoring him and son Adam, third from left, for 10 years of service to Israeli tennis, April 2015. (Courtesy of the David Squad)

Coffer’s son Adam points out that countries today curry favor through sports, as they have for many years. He points to Djokovic.

“If you stopped someone in the streets 10 years ago, most people would say that it was a country of wars and murder,” the younger Coffer says. “Today, thanks to Novak, half the people will say that the Serbs are nice, athletic, smiling people.”

“People may warm to Yishai — to his smile, to his talent,” he said. “We could win friends. So we are here to find talent and nurture it.

The squad mostly trains in Raanana  with such top coaches as Tzipora Oblizer, formerly one of the world’s top 75 players, Dedi Jacob and Eyal Omid. Jan Pochter, who has tutored Israeli national teams and is a veteran of international tennis, serves as Oliel’s primary coach.

Oliel is joined on the squad by May Kimhi and Keren Rozen, both 16; Roi Ginat, 14; and Yair Sarouk, 12. They make occasional training trips to such destinations as South Florida and Spain to train with extended members of the David Squad family, including former pros Aaron Krickstein and Manuel Santana.

“My father could afford to put them up in a hotel,” Adam Coffer says, “but we all stay together in our home,” referring to Spain and Florida. “They spend time together, feed off each other, pick each other up and share in the glory — you can’t put a price on that.” And the older athletes, like Oliel, mentor the younger ones.

The David Squad family, as the elder Coffer calls it, “is very warm and supportive.”

Being part of the squad requires commitment by the players and their parents, who must abide by a strict code of ethics: play to win, play fair, respect yourself — and, most important, Coffer says, “respect your parents,” who don’t join their children on trips around the world.

Coffer attributes his love of Israel and sports to his parents.

“My father was an ardent Zionist,” he says. “I remember him trying to raise money in those days for armaments. He always loved Israel and sports, and he gave his four sons the opportunity to play all sports — I played college level tennis.”

Coffer remembers visiting Israel for the first time at the age of 20. And he has brought his own family to Israel on many occasions. From the first visit, he says, “I loved Israel.  It stood for all Jews — for spirit, defiance and progress. It made me feel good.”

Israel does have other tennis programs for young people. The Israel Tennis Center, for one, is a grassroots effort of 14 centers designed to grow the sport in Israel across religious and socioeconomic lines, often working with at-risk youth. The David Squad approach is more targeted.

“We identify the best possible players in Israel, with the greatest potential, at any age,” Adam Coffer says. “Our sole intention is to produce international level players capable of competing for Grand Slams.”

Danny Gelley, CEO of the the Israel Tennis Center, says, “Every center has a competitive tennis program for juniors, but we can’t afford to do individual coaching. Our whole budget is a fraction of what [Coffer] spends.”

Gelley adds that Coffer “is very independent and we have little relationship with him.”

“We have very little involvement with the Israel Tennis Association or the Israel Tennis Centers,” he said. “We expect our kids, who are the best in Israel, to be entitled to the same contributions, if provided, by the ITA, as other players.

While Israel tennis stakeholders may differ in organizational mandate, approach and funding, all stand united in their desire for the day when Israel will produce world-class tennis talent.