Ethiopian Israelis riot in Jerusalem over attacks by police 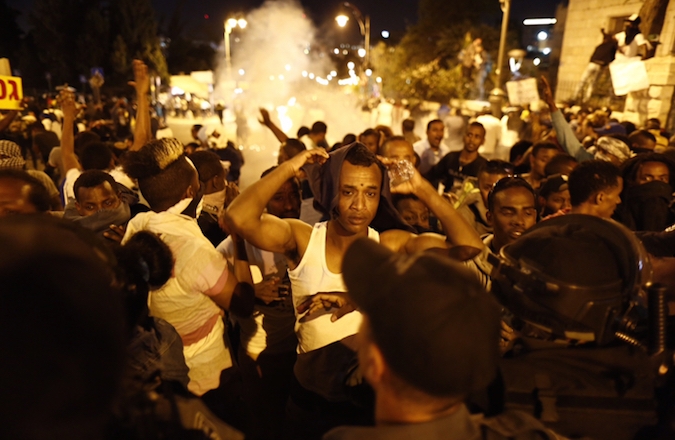 On Thursday afternoon, some 1,000 protesters blocked roads and the Jerusalem Light Rail, and threw rocks and bottles at police sent to quell the rioting. At least three police officers and eight demonstrators have been injured.

The protests over alleged police brutality and racism were sparked by the two beatings this week of Ethiopian-Israelis, both captured on video. On Wednesday, inspectors from the Population and Immigration Authority beat a Beersheba man who they mistook for an African migrant. On Sunday, police officers beat a soldier who was wearing his uniform.

“I strongly condemn the beating of the Ethiopian IDF soldier and those responsible will be held accountable,” Israeli Prime Minister Benjamin Netanyahu said in a statement issued Thursday evening. “However, no one is allowed to take the law into their own hands. The immigrants from Ethiopia and their families are dear to us, and the State of Israel is taking many steps to ease their integration into society.”

Jerusalem Mayor Nir Barkat, arriving during the protest in an effort to calm things, told the protesters that he respected their right to protest despite not having a permit from police.

Over 120,000 Ethiopians have moved to Israel in the past two decades.