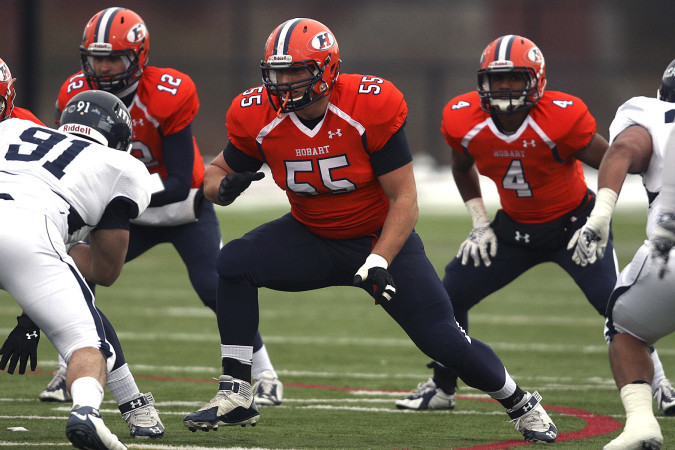 Ali Marpet, 55, in action for Hobart College, expects to go in the first four rounds of the NFL Draft. (Kevin Colton/Hobart College)
Advertisement

UPDATE: Ali Marpet was taken in the second round of the NFL Draft by the Tampa Bay Buccaneers, the 61st overall pick, on Friday.

(JTA) – When Alexander “Ali” Marpet and Jake Fuerst went on a camel ride during a Birthright trip to Israel last summer, the animal brayed loudly in displeasure at the 467 pounds of young men perched on its back.

Most of the camel’s agony could be blamed on the 6-foot-4, 307-pound Marpet, who was overseas on a final fling of sorts before gearing up for the big time and facing even bigger bodies than his.

Marpet, an offensive lineman from Hobart College in upstate New York, is expected to be a high pick in the National Football League’s draft that begins Thursday night in Chicago.

His speed and strength demonstrated at this winter’s NFL combine make him a logical choice. Sports Illustrated has Marpet, a member of the Jewish Sports Review’s 2014 All-America football team, as the 89th-rated player among those draft eligible and 14th among offensive linemen.

But Hobart, a private liberal arts institution of 2,396 students in the Finger Lakes region, isn’t exactly known for football, despite its 12-1 record and No. 9 national ranking last season. The Statesmen compete in Division III, which does not award athletic scholarships or receive much publicity, and have had only one other player drafted by the NFL.

Still, Marpet told JTA on Tuesday that he expects to be taken by the 100th pick, meaning early in the fourth round. That would be on Friday or Saturday.

“I am a little excited and a little bit nervous,” Marpet said of the draft, which he will watch on television at his father’s house in Hastings-on-Hudson, a town about 20 miles north of Manhattan. 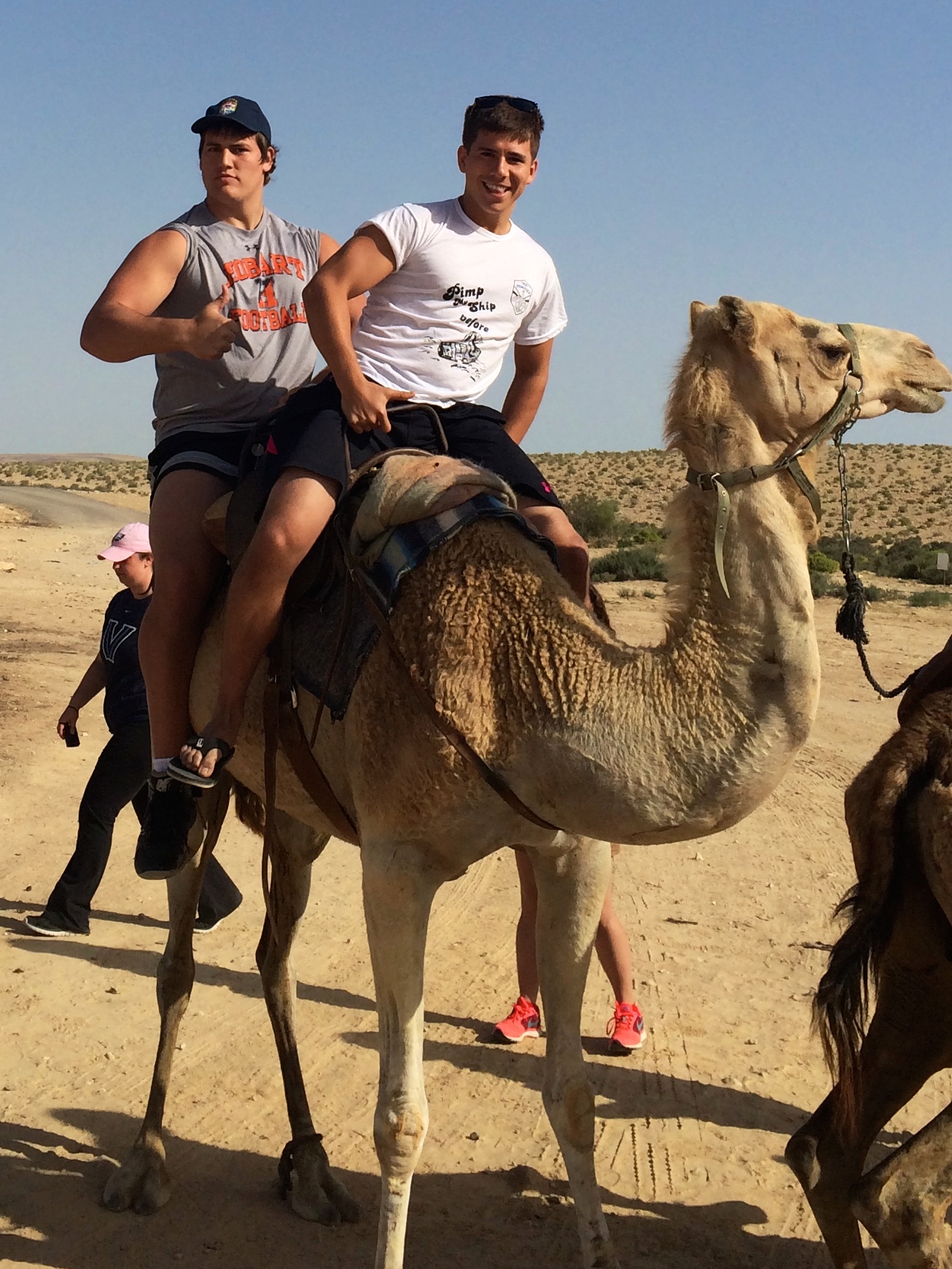 Hump day: Ali Marpet, in rear, and his longtime friend Jake Fuerst riding a camel during a Birthright Israel trip in the summer of 2014. (Courtesy of Jake Fuerst)

Fuerst, a senior at Tulane, will fly up from New Orleans to be there along with scores of other friends and relatives. He’s well familiar with the home, having spent plenty of Friday nights there with other friends of Marpet for Sabbath candlelighting and singing.

“It was a given that we’d show up [there],” said Fuerst, who has known Marpet since the sixth grade. Another childhood pal, George Moore, will be traveling from Japan, where he serves with the U.S. Navy.

Their being on hand – along with Ali’s two older brothers and younger sister, who live in Chicago and Florida – “means a lot,” Marpet said.

In the NFL, he would join such Jewish players as offensive lineman Geoff Schwartz of the New York Giants, Marpet’s favorite team growing up.

Marpet didn’t consider playing pro football a realistic aspiration until enjoying what he described as a “pretty dominant” sophomore season, when he weighed 270 pounds — small by NFL standards among offensive linemen. That sense was bolstered, he said, by a strong workout before NFL scouts following his junior year.

Michael Green, Hobart’s assistant offensive line coach last season and a teammate the two prior years, said that Marpet inspired the Statesmen with his dedication, leadership and humility.

“I saw him as a leader by example. He was a two-year captain because he was so dominant on the football field and because of how hard he worked,” Green said. “He was a mentor to other players and helped build their skills, their technique. And he’s been humble – never a cocky guy or egotistical, but confident.”

Bill Marpet described his son as “a quiet person” who’s never in a bad mood. Beginning in childhood, whether bowling or learning to ride a bicycle, his son always has been “completely focused” on the task at hand.

Even during a family vacation in Jamaica a year ago, the elder Marpet recalled, his son was single-minded in his approach to his football training, setting his phone to ring every two hours as a reminder to eat protein bars, sandwiches and fruit, and working out regularly.

A videographer in Manhattan’s fashion industry, Bill Marpet was a studio cameraman for a Tel Aviv-based educational television program while living in Israel from 1974 through 1979; his first wife was Israeli.

Ali Marpet is indirectly responsible for his dad meeting his fiancee, Susan Liberati, as the two divorced parents regularly watched their sons — co-captains on the Hastings High squad — play football.

Throughout the three-day draft, Marpet said, “I’ll be waiting for the phone call” from the NFL team that selects him and is excited to see where he’ll end up.

He would be just the third Division III player in the past seven years to be selected. Few have gained prominence in the league — Washington Redskins wide receiver Pierre Garcon, Buffalo Bills running back Fred Jackson and Seattle Seahawks placekicker Steven Hauschka are the notable exceptions still active, and Jackson and Hauschka went undrafted.

Marpet, an economics major at Hobart with a minor in philosophy and public policy, said he’ll proudly represent his small school and Division III players in the NFL. The Jews, too: He said it would be “a huge honor” to represent Jewish athletes.