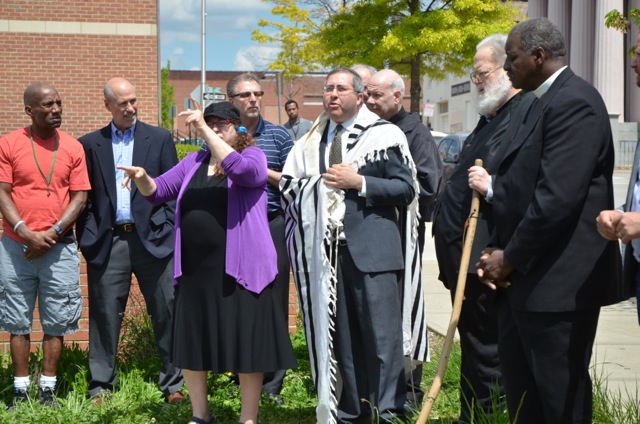 Etan Mintz is the rabbi of B’nai Israel Congregation, Baltimore’s oldest continually active synagogue, located five blocks from City Hall in downtown Baltimore. Amid the protests sparked by the death of Freddie Gray in police custody last month, he joined with rabbinic colleagues and other spiritual leaders in the city to offer support to those in need. These are his reflections:

This week has been quite a week for our city. We are a community that is so cloistered. Baltimore is a city of neighborhoods and we rarely venture out beyond our own. The last time I was in the Sandtown-Winchester area was our first week in Baltimore when we were welcomed to the city by having our car towed. I went with my wife to pick up the car in the evening, but the emptiness and abandoned homes caused us to turn around – we were afraid to even get out of the car. The next morning we picked it up. This past week, almost three years later, I returned to that neighborhood, which is only a couple miles away from my home, but worlds apart. But this time, instead of fear, I was filled with a spirit of hope.

My colleagues and I spent the week meeting with local clergy, bringing basic supplies and necessities to those in need, showing support to shopkeepers whose stores were looted, and walking the streets listening to our brothers and sisters face to face. Unlike the media reports of our city burning, I was inspired by the people of Baltimore. Beneath the surface was moment after moment of brotherhood.

The climax was on Friday, when my rabbinic colleagues from Baltimore and Washington joined me in pastoral relief work. We went to Penn North to show support and solidarity with those who suffered as a result of Monday night’s looting. We were literally embraced by all those we met.

First, we met Roger and asked where he was from. “Brooklyn,’ he responded.

“Really?” my friend Rabbi Shmuel said. “I’m from Brooklyn, too. What neighborhood?”

“Me too. Where do you live now?” asked Shmuel.

The rabbis were stunned. We came thinking we were so different – different backgrounds, races, and religions. But at the end of the day, we have so much in common.

Next, we met Reverend Martin, who just wanted to pray with us rabbis. It was the real deal, deep from the heart and full of kavana (intentionality). We felt a palpable sense of holiness. We then met with a true leader, Senator Pugh, who shared a clear and powerful message of never condoning violence and also standing for justice.

At one point, we noticed our colleague Rabbi Shapiro leading a massive circle of people in prayer. The raw emotion was so palpable that this image of solidarity went viral.

The whole time, we made a point of intentionally thanking each and every police officer, who venture into harm’s way on a daily basis, for protecting our communities. As we were leaving, we were stopped over and over again to share moments of solidarity and embrace.

We were fortunate to meet Reverend Mosley, who sang spirituals with us. I invited the Reverend to join us the next day at our congregation, which he did. I was so grateful that my new friend led our congregation in song during my sermon.

The highlight, though, was after services, when we gathered outside our synagogue for a unity circle with the faith leaders of all the spiritual centers in our mixed-income neighborhood. Father Sal, Pastor Gary, Father Lawrence, Pastor Chris, Pastor Ellis, Reverend Mosley. We linked arms as our communities sang together in unity.

As we sang, our community saw that light does indeed emerge from the darkness. The biblical portion we read this past week speaks of loving your neighbor as yourself. But first you have to know your neighbor to love him. It was through the unfortunate events of this past week that we came to know many of our neighbors.

It shouldn’t take a crisis for folks to come together, but sometimes it does. What’s important now is that this brotherhood doesn’t end when things return to “normal.” The leadership of our Jonestown/Little Italy community is committed to making sure that doesn’t happen, and that this unity is the new normal for Baltimore. Out of crisis, much good has emerged. The clergy at my synagogue, B’nai Israel, will now be holding regular meetings with clergy from Helping Up Mission, St. Vincent De Paul, St. Leo the Great and Gallery Church. We have decided to host an annual parishioner gathering to introduce community members to one another. And we plan to work together in the upcoming weeks and months on relief projects, to harness our collective energies and resources to advance systemic change in our city.

Our synagogue, B’nai Israel on Lloyd Street, is the oldest continually active synagogue in Baltimore. We’ve gathered and prayed here every week since 1873. But have we really gathered as a community? I can now say with certainty that we have.