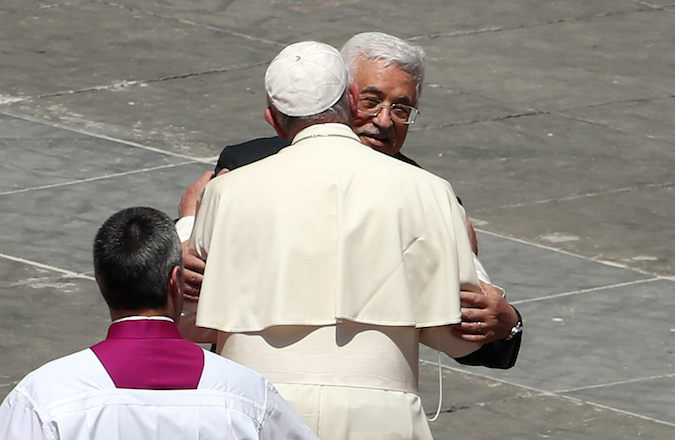 Pope Francis greets Palestinian President Mahmoud Abbas as he leaves St. Peter's Square at the end of a canonisation ceremony on May 17, 2015 in Vatican City, Vatican. (Franco Origlia/Getty Images)
Advertisement

WASHINGTON (JTA) – When considering the Vatican’s creep toward recognition of Palestinian statehood, think “Israel-Vatican” and not “Jewish-Catholic,” say Jewish officials involved in dialogue with the church.

A May 13 announcement on an agreement regarding the functioning of the church in areas under Palestinian control raised eyebrows in its reference to the “State of Palestine.”

The upset was compounded by confusion over whether Pope Francis, in a meeting over the weekend with Palestinian Authority President Mahmoud Abbas, praised him as an “angel of peace” or urged him to attain that vaunted status. On Tuesday, a Vatican spokesman said it was “very clear” that the pope was “encouraging a commitment to peace.”

But the Vatican’s shift from terming its Palestinian partner as the Palestine Liberation Organization — the designation Israel accepts — to calling it Palestine comports with a shift in Europe toward accommodating Palestinian statehood aspirations, the Jewish officials said.

Referring to a State of Palestine was “disturbing, but not critical,” Abraham Foxman, the Anti-Defamation League’s national director, said in an interview with JTA.

Catholic-Jewish relations and diplomacy between Israel and the Vatican are “on different tracks,” Foxman said.

Israeli officials, speaking anonymously, said they were “disappointed” in the use of State of Palestine.

“Such a development does not further the peace process and distances the Palestinian leadership from returning to direct bilateral negotiations. Israel will study the agreement and consider its next step,” an official told the French news agency AFP.

A number of congressional Republicans also expressed “disappointment” in the pope, Politico reported.

Marshall Breger, a professor at the Catholic University of America’s School of Law who has led a number of Jewish dialogues with other faiths, said the use of the term Palestine was the product of an evolution in how the international community is treating the Palestinian question.

“De facto, the Vatican has accepted Palestine as a state,” he said. “It just adds one more country to the over 130 that have recognized Palestine.”

The issue is a matter of diplomacy and does not breach the sensitive issues under discussion between Jews and Catholics as they mark the 50th anniversary of the Nostra Aetate, the declaration that absolved Jews of responsibility for Jesus’ death, Breger said.

“It’s a minor event,” he said. “It should not interfere with Jewish-Catholic relations.”

Using Nostra Aetate as a basis, Jewish and Catholic officials over the years have addressed problematic references to Jews in the Catholic liturgy and the role of the Vatican during the Nazi period.

Morton Klein, the president of the Zionist Organization of America, told The Washington Post that the “Palestine” reference amounted to “appeasement of radical Muslims” and signaled “the historical Catholic enmity towards Jews.”

For the most part, however, Jewish organizations dealing with the Vatican were concerned about the statement, but only insofar as it represented another success in efforts by the Palestinians to secure statehood recognition outside the context of negotiations with Israel.

“We are fully cognizant of the Pope’s good will and desire to be a voice for peaceful coexistence, which is best served, we believe, by encouraging a resumption of Israeli-Palestinian peace talks, rather than unilateral gestures outside the framework of the negotiating table,” David Harris, the American Jewish Committee director, said in a statement.

Weighing in with similar statements were the Conference of Presidents of Major American Jewish Organizations and the Union for Reform Judaism.

When the Vatican launched talks with the Palestinians in 2000, it referred to the other side as the PLO, but over time shifted to Palestine. Pope Francis in his 2014 visit to Israel and the West Bank spoke of “my presence today in Palestine” during a Bethlehem stop and referred to “the good relations existing between the Holy See and the State of Palestine.”

Daniel Mariaschin, the director of B’nai B’rith International, said the recognition of Palestine raised concerns, but they must be seen in the context of an increased willingness in Europe to recognize Palestinian statehood and not of Jewish-Catholic relations.

He likened it to the French and British parliaments recent nonbinding recognitions of Palestine and Sweden’s decision to recognize Palestinian statehood.

“It’s important, I won’t dismiss it, but it shouldn’t be seen outside that broader context,” Mariaschin said. “It raises the expectations of Palestinians to unmeetable levels and frustrates the Israelis who say we can’t get a fair deal in the international community.”

Obama administration officials continue to maintain that recognizing Palestine outside the context of peace talks is counterproductive. However, prompted in part by Israeli Prime Minister Benjamin Netanyahu’s seeming election eve retreat from supporting a two-state solution, they now will not count out withholding the U.S. veto should the U.N. Security Council consider a Palestinian statehood resolution.

Seymour Reich, a former chairman of the Conference of Presidents of Major American Jewish Organizations, who also has been involved in Jewish-Catholic dialogue, said the Palestine recognition should serve as a “wake-up call” for Israel.

“It doesn’t affect [Vatican] relations with Israel at all,” Reich said.

Instead, he argued, Vatican recognition of Palestine is another manifestation of European disaffection with Benjamin Netanyahu’s hawkish policies and the expansion of settlements.