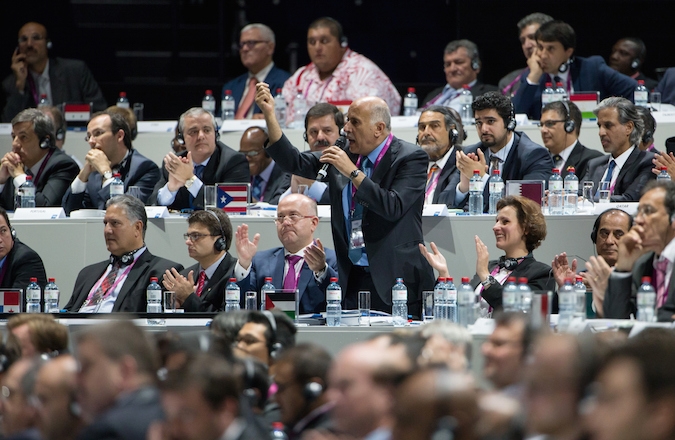 (JTA) — The Palestinian soccer association withdrew its bid to have members of the FIFA world soccer body vote on whether to suspend Israel.

The head of the Palestine Football Association, Jibril Rajoub, on Friday said in announcing the move: “I thank those who convinced me to drop the suspension [of Israel]. The German president [Angela Merkel] spoke to me … this affected me,” The Guardian reported in ints online edition.

Rajoub spoke in Zurich, Switzerland, where delegates from FIFA’s 209 member states and federations convened for the body’s 65th congress, amid allegations that nine of its senior members were involved in a corruption and bribes scandal. Against this backdrop, reporters from around the world closely watched as the organization’s embattled president, Sepp Blatter, urged delegates to reelect him for a fifth term despite the corruption allegations.

Still, the Palestinian delegation’s threat to bring Israel’s proposed suspension to a vote also received extensive media coverage. The Palestinian Authority said it was pursuing this issue because Israel was limiting its players’ travel without justification and discriminating against them. Israel denied this, but agreed to introduce some concessions on freedom of travel.

However, no compromise was found on the Palestinians delegation’s demand that Israel’s soccer association suspend five teams from West Bank settlements.

Blatter and other soccer bosses opposed the Palestinian vote, calling it a politicization of the athletic field.

Ofer Eini, who heads the Israeli soccer association, proposed setting up a joint committee to “work out all the aspects” of the issues concerned after Rajoub’s announcement.

Israeli Prime Minister Benjamin Netanyahu thanked Eini for his efforts to prevent suspension. “Our international effort has proven itself and led to the failure of the Palestinian Authority attempt to oust us from FIFA,” Netayahu wrote in a statement.

Before Rajoub’s announcement, a pro-Palestinian demonstrator was forcibly removed from the FIFA congress after she interrupted Blatter’s address by waving a Palestinian flag while chanting slogans. Blatter asked security to remove her, the Dutch De Telegraaf daily reported. Shortly thereafter, the hotel hosting the congress was partially evacuated due to a bomb threat, which turned out to be false. The people who reported the threat to police did not say whether it was connected to the scheduled vote on Israel.

“I look forward to the day in which Palestinians, like many others, are enjoying the benefits of the game. Let us look forward and be optimistic,” Rajoub also said. He added he has received threats over his decision to drop the suspension bid. “I might be dead in a year,” Rajoub said.

Blatter reportedly offered to bring the matter of the five settlement teams up to a vote at the United Nations, but Israel declined, citing a record of anti-Israel resolutions passed by the United Nations through what Israel has called “automatic majorities” against it.

Blatter, who has been heavily criticized for not doing enough to combat corruption in FIFA, is being challenged by Jordanian Prince Ali bin Al Hussein for the presidency of FIFA, the most powerful job in soccer.