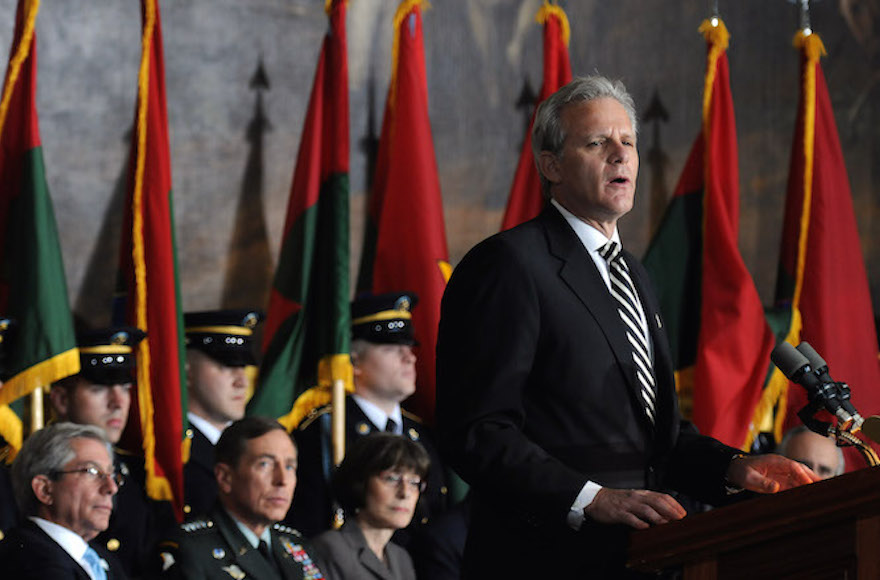 Michael Oren speaking at the Holocaust Day of Remembrance Ceremony inside the Rotunda of the U.S. Capitol on April 15, 2010. (Astrid Riecken/Getty Images)
Advertisement

When Michael Oren announced he was running for Knesset with the Kulanu party — a new, center-right faction focused on housing policy as opposed to foreign policy — it came as something of a surprise.

Oren’s knowledge and experience — as a Middle East historian and Israel’s former ambassador to the United States — was in international relations, not domestic economic policy. His natural home, it would seem, would have been in the Likud Party, Israel’s flagship right wing faction. Likud Prime Minister Bejamin Netanyahu appointed Oren to his ambassador post, and Likud has traditionally focused on foreign and defense policy.

I asked Oren about that choice when I interviewed him ahead of the March 2015 election. His answer hinged on the influence he would have. As the sole foreign policy guru in a socio-economically focused party, he said, he would be in charge of affairs of state.

“Would it be better running as the exclusive authority over diplomatic positions in a party like Kulanu that will be part of any coalition, or being number 20-something in one of the two large parties?” he asked. “The party itself gives its imprimatur to my position.”

The backlash against Oren’s Wall Street Journal op-ed this week, which placed principal blame on President Obama for the crisis in U.S.-Israel relations, dealt a blow to Oren’s claim to have “exclusive authority” as Kulanu’s foreign policy chief. After the piece came out, Kulanu Chairman Moshe Kahlon sent a letter to U.S. Ambassador Dan Shapiro distancing himself from Oren’s words.

“‘Ally’ was written long before Dr. Oren joined Kulanu or was even considered by me to join the party,” Kahlon wrote, referring to Oren’s forthcoming book on U.S.-Israel relations. Kahlon wrote that the book “presents a personal perspective and experience.”

Kulanu’s establishment was driven by a desire to curb Israel’s skyrocketing housing prices and reform its banking sector. To that effect, Kahlon received the finance portfolio as well as control of the Housing Ministry, leaving Oren as an ordinary Knesset member with no particular foreign policy responsibility. Now, it looks like that’s where he’ll stay for the foreseeable future, speaking only for himself on foreign policy issues — not for his party.

This is a stark change from the influence Oren had as Israel’s ambassador in Washington. On the other hand, this may be what Oren wanted. In the interview, he said he chose to be in the Knesset in order to play a part in deciding Israel’s future.

“I’ve been honored to do many types of service for the Jewish people,” Oren told JTA. “I think that becoming a decision-maker on issues that will determine the future of Israel would be my most substantial.”

Born an American citizen, that’s the path he has taken his whole life — first moving to Israel, then giving up his American citizenship to become ambassador, and finally leaving the American political scene for the Israeli parliament.

Now he seems to be embracing that role. Picking an internal party fight is precisely what Israeli lawmakers do.