At Foxman farewell, lots of hugs (from Abe) and murmurs (about Oren) 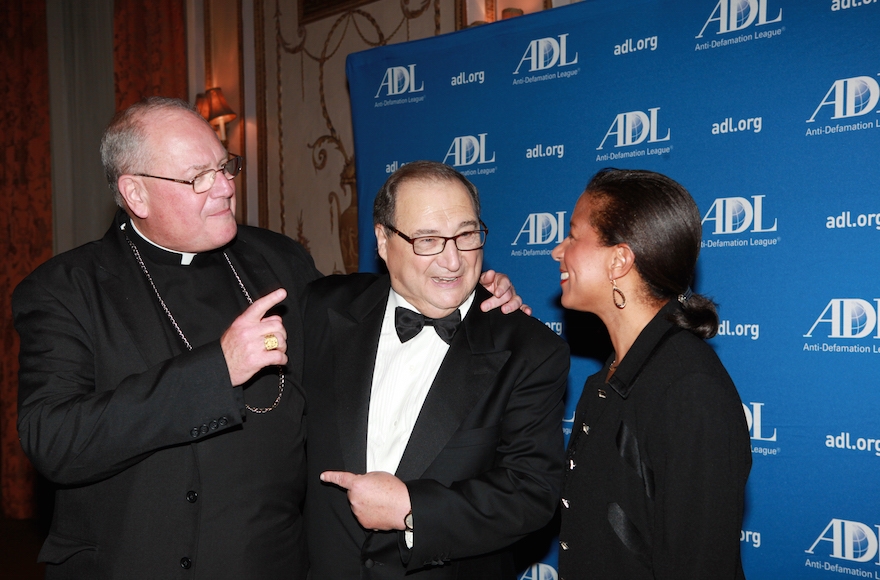 Abe likes to hug, and he hugged everyone who came out to the June 17 gala marking his retirement from the Anti-Defamation League after 50 years, the past 28 leading the civil rights agency.

So plenty of people got an Abe embrace: About 1,200 were in attendance, necessitating the use of the balconies in the vaulted Waldorf Astoria ballroom.

Onstage there were tributes from Jews, Muslims and Christians, from prominent liberals and conservatives — a testament to Foxman’s blunt diplomacy and his ability to reach across divides.

It was the conversation opener in just about every encounter I experienced or overheard: What is the former Israeli ambassador to the United States thinking? Even Abe brought it up right after, yes, he hugged me.

The timing was coincidental: Foxman’s party occurred the same week that Oren’s publicists were peddling advance publicity for the June 23 release of his memoir, “Ally.” But the contrast was real and pronounced: Bidding farewell to the career of a man who built bridges, the crowd was contemplating the next moves of a man who seemed eager to burn them.

Oren, the U.S.-born envoy from 2009 to 2013 who had been the darling of the American Jewish community — and now a Knesset member in Prime Minister Benjamin Netanyahu’s ruling coalition — earlier in the week had published an Op-Ed in The Wall Street Journal charging President Barack Obama with the “deliberate” abandonment of core principles in the U.S.-Israel relationship.

Oren’s strident tone, and his willingness to cast blame, baffled a crowd of Jewish insiders whose experience of him was as a diplomat, one who was adept at keeping even-keeled during tensions between Netanyahu and Obama. The man who often said while he was ambassador that the two leaders engaged as friendly equals, as would any “two guys educated in Cambridge, Mass.” 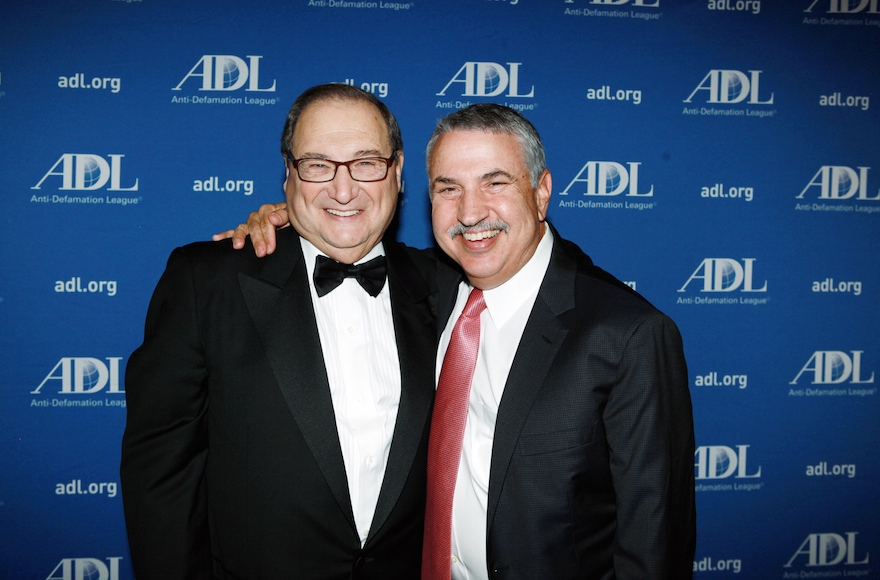 Sideline remarks are off the record, but you get the flavor of how a crowd of ADL acolytes reacted to Oren 2.0 in the statement that Foxman released after the ex-ambassador published another article related to his book release.

Oren, in an essay that appeared in Foreign Policy, “veers into the realm of conspiracy theories, and with an element of amateur psychoanalysis he links U.S. policies in the Middle East to the president’s personal history of having a Muslim father,” Foxman said.

Then, Foxman suggests, Oren “takes it it a step further by suggesting this ‘worldview’ of Muslims and Islam has driven the president to embrace the Muslim world at the expense of both Israel and U.S. national security interests. This results in borderline stereotyping and insensitivity.”

Oren in the essay argues that Obama hoped to win over the “ummah,” the Islamic term for “a community of believers that transcends borders, cultures, and nationalities.”

“I could imagine how a child raised by a Christian mother might see himself as a natural bridge between her two Muslim husbands,” Oren wrote. “I could also speculate how that child’s abandonment by those men could lead him, many years later, to seek acceptance by their co-religionists.”

There were no musings on abandonment at the ADL fete — it was hard to think of being left alone when Foxman’s hugs kept surfacing. I counted six references.

“Have you ever been hugged by Abe Foxman?” Rabbi Arthur Schneier asked. “It comes from the heart.”

“There’s so much hugging in the room tonight,” said Joel Klein, the former New York City schools czar, who looked a little like he needed a hug after Katie Couric, the evening’s emcee, revealed that he had blown her off after a blind date in a distant past.

Foxman, 75, received accolades from two top Obama administration officials, Rice and U.N. envoy Samantha Power, and from Tom Friedman, The New York Times columnist who has clashed with Foxman on Israel policy. Friedman revealed that Foxman had been his counselor at Herzl Camp in Wisconsin, where a highlight each year was re-creating the Dreyfus Affair.

Foxman’s retirement also merited an appearance by Roger Ailes, the Fox News Channel chief who faced Foxman’s wrath in the past over the conspiracy musings of one-time Fox personality Glenn Beck.

The entire evening was a testament to Foxman’s ability to argue, and then make up, often within the same conversation.

“Within minutes of our first phone call I felt like family,” Power said, describing their first interaction in Obama’s first term, when she was on the National Security Council. “We were yelling, interrupting one another and swearing. I think I almost ended this first phone call saying ‘Love you.’ ”

(Power also related on odd tale about butt-dialing Foxman on her way to dropping off her child at school one morning, and hearing his anguished voice emerge from her backside. The fact that in context, the story did not at all seem weirdly inappropriate testifies to the evening’s intimacy.)

Eboo Patel, a Muslim who heads Interfaith Youth Ministries, described engaging with Foxman after the ADL registered its objections to a Muslim-led bid to build an Islamic community center and monument to the victims of the Sept. 11, 2001 attacks near the World Trade Center, the site of the terrorism in New York.

READ: Is Oren’s call for ‘no surprises’ in U.S.-Israel ties possible?

That’s been my professional experience with Foxman and his headline-worthy tendency toward the controversial sound bite. If you ask him if he thinks that maybe, this time, he’s crossed a line, he admits he’s wrong, or he admits you might have a point, or he says he disagrees, but you know what, that’s OK. I’ve called him out once or twice over the years, and that pretty much characterizes the follow-up calls.

Foxman’s reach was evident in the video messages from Obama and his White House predecessor, George W. Bush, and the photo gallery on a constant loop. Most striking: Abe, grinning, one arm around Henry Kissinger, the other around the Rev. Jesse Jackson. What conversation did that photographer interrupt?

Call it the Foxman follow-up. Over 50 years, it’s helped him reach interesting places.

“Yes, I’m jealous you seem to have a lot more access to the pope than I do,” said Cardinal Timothy Dolan, the archbishop of New York.

But, Dolan concluded, “You’ve made me a lot more sensitive, a lot more aware.”

The next time Foxman and Oren meet, if they meet again, maybe Abe can deliver one of those hugs.