Throughout Hillary Clinton’s life and career, US Jews have been close at hand 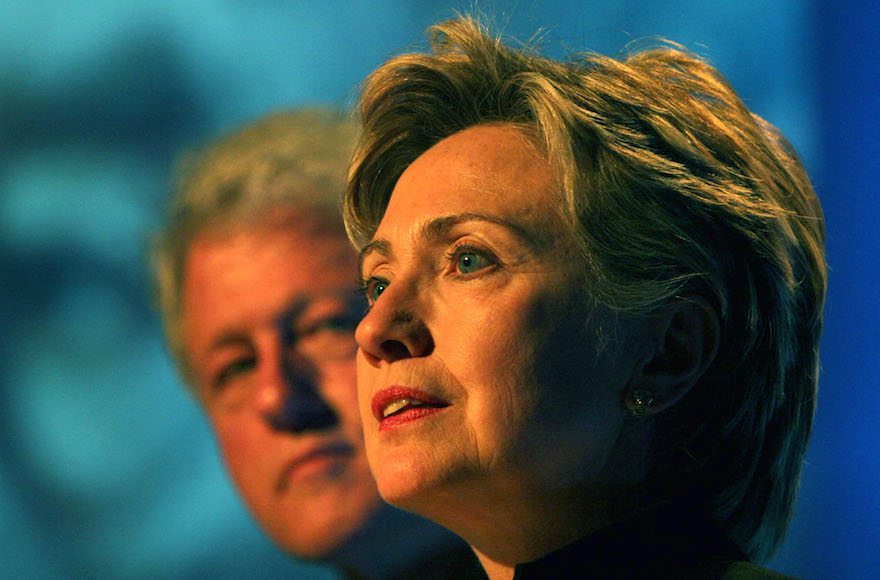 Clinton’s Jewish encounters have been a natural consequence of her East Coast education, her trajectory in the party favored by a substantial majority of Jewish-Americans, and her embrace of the Jewish narrative of triumphing over adversity and bigotry, longtime friends of the 2016 presidential candidate say.

Sara Ehrman, whose friendship with the Democratic front-runner dates back more than four decades, told JTA that the Clintons, upon arriving in Arkansas in the mid-1970s, quickly established ties with leaders of the state’s tiny Jewish community.

“They were a smart, educated young couple … who had come down to this wonderful little city,” said Ehrman, now 96, referring to Little Rock. “The Jews gravitated to them. Among her best and most fervent supporters were Jews.”

The Clintons would attend seders at the homes of Jewish friends during their Little Rock years, and in 1988 Bill Clinton as governor co-officiated with Rabbi Zeke Palnick of Arkansas’ capital city at the Jewish wedding of Richard and Sheila Bronfman.

The Clintons are “both very spiritual and they tend to like to experience different cultures around them,” said Sheila Bronfman, who traveled the country to campaign for Bill Clinton in 1992 and 1996, and for Hillary Clinton in 2008. (Plans are underway for a road trip in advance of the 2016 presidential election, she said.)

Ehrman, a longtime activist with the Democratic Party and with pro-Israel groups, met Hillary Rodham during the 1972 George McGovern presidential campaign.

“I went down to San Antonio to run south Texas for McGovern,” Ehrman said of the Democratic nominee. “We were doing voter registration, Mexican-Americans. I wanted a lawyer to make sure everything we did was right. I called D.C., I said ‘You gotta send a lawyer down here.’ The next day, a young woman comes in, she looks 19, all in brown with Coke-bottle glasses. She said, ‘I’m Hilary Rodham, the lawyer.’ And everyone in the room said, ‘We don’t want a girl, we want a real lawyer.’ We immediately bonded as outsiders.”

Two years later, Rodham was hired by the U.S. House of Representatives’ Judiciary Committee to investigate President Nixon’s role in the Watergate scandal. So she called Ehrman, asking whether she knew of cheap digs. Ehrman invited her to bunk at her house, and Rodham agreed.

After Nixon resigned, the two drove together from Washington, D.C., to Fayetteville, where Bill Clinton was teaching law at the University of Arkansas and where Rodham planned to join him.

“All the way down, I would say, ‘Are you out of your mind? It’s a godforsaken place, you can’t get decent food there, what are you going to do?’” recalled Ehrman, speaking to JTA in her apartment on Embassy Row here.

“They were both very happy to come to the bar mitzvah of my son, Eliot,” Gitelman said in an email.

Palnick’s son Lazar, who attended the bar mitzvah, remembers Hillary Rodham and Bill Clinton working the room for political support. And when his rabbi father would travel to Fayetteville for pastoral work, the teenage Lazar would ride along to help leaflet neighborhoods in support of Clinton, who would go on to lose his 1974 congressional bid to the Republican incumbent.

During Hillary Clinton’s 2000 U.S. Senate campaign, Paul Fray, Bill Clinton’s campaign manager in the ’74 race, told a writer that Hillary Rodham, in a heated argument on election night as it became clear that Clinton would be defeated, called Fray a “f***ing Jew bastard.” Both Clintons have vehemently denied the charge, and noted that they had fallen out with Fray after the campaign. They also said that they had no idea Fray was one-eighth Jewish.

A year after the loss, the couple were married by a Methodist minister in their Fayetteville living room. The following year, Bill Clinton became the state’s attorney general, and two years after that he was elected governor of Arkansas.

“I remember them coming for seder at our house,” said Lazar Palnick, now a lawyer for the Democratic Party in Pennsylvania. “The Clintons fit very much in with a group of people who cared about feeding the poor, educating people, making sure everyone gets an opportunity.”

Hillary Clinton’s maternal grandmother, Della, who was divorced, had remarried a Jewish man, Max Rosenberg. And the presidential hopeful has credited Rosenberg with encouraging her mother, Dorothy, and her grandmother to reconcile years after Della sent Dorothy at age 8 to live with her strict and forbidding parents.

In her first autobiography, “Living History,” Hillary Clinton recalls, when she was 10, noticing numbers tattooed on the arm of an acquaintance of her father. Hugh Rodham explained that Nazis had tattooed his acquaintance when he was a prisoner of war, and told her how the Nazis also tattooed Jews, whom they murdered en masse. 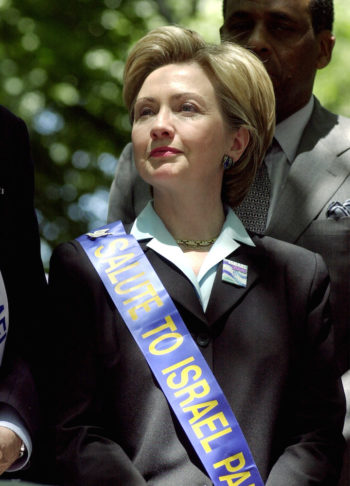 “I knew that my grandmother Della’s husband, Max Rosenberg, was Jewish, and I was horrified that someone like him could have been murdered just because of his religion,” Clinton wrote in 2003.

By the time Bill Clinton was running for president in 1992, the youthful governor and his wife had become favorites among Jewish Democrats. Ehrman described a presidential campaign headquarters buzzing with Jewish activists.

“The Jews loved the Clintons so much, they were coming from around the country,” she said. “If they couldn’t come, they would send food – the whole staff would end up in the Jewish room because there were bagels from New York, Danish pastries, Goldenberg’s peanut chews.”

The “Jewish room” she describes refers to the area where Jewish activists would congregate.

Steve Rabinowitz, a campaign press aide who went on to become a deputy communications director in the White House, recalls 100 people coming to a Yom Kippur break-fast he organized in Little Rock during the campaign.

The Jewish sensibility permeated the Clinton White House, where the first couple inaugurated the annual Hanukkah party in 1993, in part because of the abundance of Jewish staffers. They included communications chief Ann Lewis, senior adviser Rahm Emanuel and Rabinowitz. There was Jack Lew, a special assistant to President Clinton who would go on to become Treasure secretary under President Barack Obama, and Ron Klain, the chief of staff to Vice President Al Gore and now Obama’s Ebola czar.

“I said, ‘You’re having a Christmas party, you’ve got to have a Hanukkah party,’ ” Ehrman recalled. (Unlike the formal Hanukkah parties inaugurated by President George W. Bush and continued by Obama, these were for staffers and their families, although on occasion children from Washington-area Jewish day schools made an appearance.)

The Clintons’ first Israel visit, with a church group in 1981, also included the West Bank. Approaching Bill Clinton’s presidential run in 1992, they reached out to the American Israel Public Affairs Committee, and AIPAC helped set up a meeting with Martin Indyk, a former staffer who founded the Washington Institute for Near East Policy think tank. The trio hit it off — the meeting ran hours overtime as both Clintons peppered Indyk with questions, according to a source who was present. Indyk went on to become the U.S. ambassador to Israel and Clinton’s top Middle East peace negotiator.

Bill Clinton’s embrace of the Oslo Accords between Israel and the Palestine Liberation Organization — initiated by the government of Israeli Prime Minister Yitzhak Rabin — further strengthened the couple’s ties to national Jewish groups. Hillary Clinton’s eight years in the Senate representing New York cemented those ties. Her pro-Israel advocacy included exposing incitement in Palestinian media and helping to win full membership for Magen David Adom in the International Committee of the Red Cross. She also blamed the Palestinians, and not the Israelis, for the collapse of the 2000 Camp David peace talks and the subsequent second intifada.

Her advocacy followed the headline-making fallout from an appearance by Hillary Clinton in 1999 at an event with Suha Arafat, the wife of the Palestinian leader Yasser Arafat. Speaking in Arabic, Suha Arafat accused Israel of poisoning Arab children. Clinton, ostensibly listening to a translation on headphones, did not react and kissed Suha Arafat after her remarks. Clinton claimed that she did not hear the reference to poisoning; she noted that others in the room missed it, too.

The subsequent tabloid attention rattled her, coming just as Clinton was launching her Senate campaign, and helped shape the political caution that has come to define her.

“I had learned a hard lesson about the hazards of merging my role in the international diplomatic arena with the complexities of local New York politics,” she wrote in “Living History.”

After winning the Senate seat in 2000, Clinton repeatedly secured the Tuesday-morning slot at national Jewish conferences for AIPAC and the Jewish Federations of North America, among others – a slot reserved for the most respected pro-Israel figure in Congress. Clinton chose the annual AIPAC conference in 2008 to concede the primaries to Obama.

For her 2016 bid, Clinton has lined up pro-Israel funding powerhouses who helped fuel her ’08 bid, like entertainment mogul Haim Saban, and has added some of Obama’s most prominent Jewish bundlers, notably movie executive Jeffrey Katzenberg. Lewis, the former White House communications chief, leads her Jewish outreach.

There were other alliances, less noticeable back in the 1990s, that would also be consequential, at least personally.

The 1992 election swept into Congress the largest class of Jewish lawmakers ever, 51. Among them was Rep. Marjorie Margolies, D-Pa., who served a single term before being ousted in the Republican takeover of the House in ’94. Her opponents raised the issue of Margolies’ tie-breaking vote in 1993 passing Bill Clinton’s unpopular tax bill.

The Clintons, known for their loyalty to those who fall on their sword for them, campaigned for Margolies in her 2014 congressional bid; she lost in the primaries. Neither Hillary Clinton’s office nor Margolies responded to requests for comment.

Margolies’ son, Marc Mezvinsky, met the Clintons’ daughter, Chelsea, when they were children at a political retreat, and fell in love when they met again at Stanford University. At their wedding, co-officiating was Rabbi James Ponet, the head rabbi at Yale.

Ponet chatted only briefly with Hillary Clinton at the wedding, but got to know her more recently at a memorial for the philanthropist Edgar Bronfman. Ponet in an interview with JTA said Clinton spoke with sensitivity about Bronfman’s efforts to make Swiss banks accountable for Holocaust-era Jewish assets.

Ponet also described a pre-wedding meeting with the young couple and discussing the huppah. The rabbi advised the couple that any cloth with meaning to the family could serve as a wedding canopy.