Hebrew in the huddle: American-style football gains ground in Israel 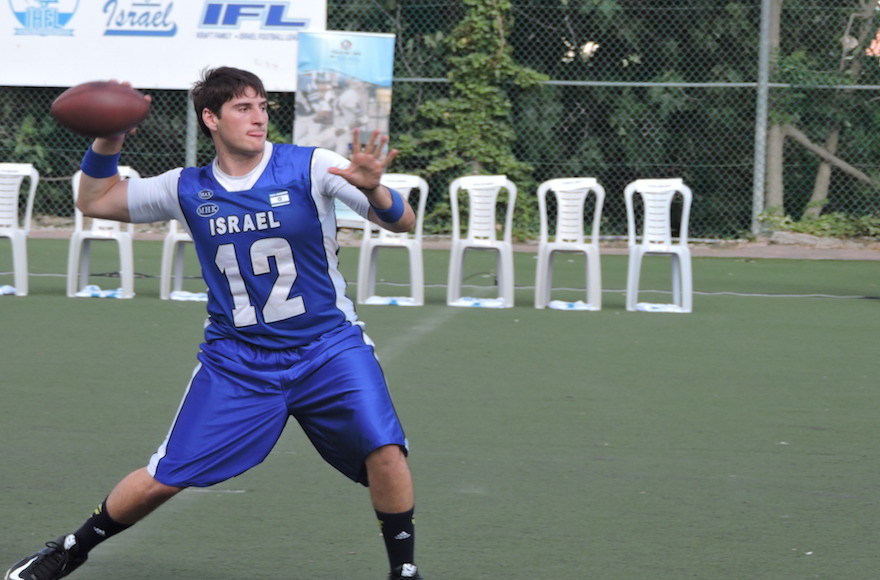 Alex Swieca, a former third-string quarterback for the University of Michigan, throws a pass in a scrimmage Sunday at Jerusalem's Kraft Stadium. (Ben Sales)
Advertisement 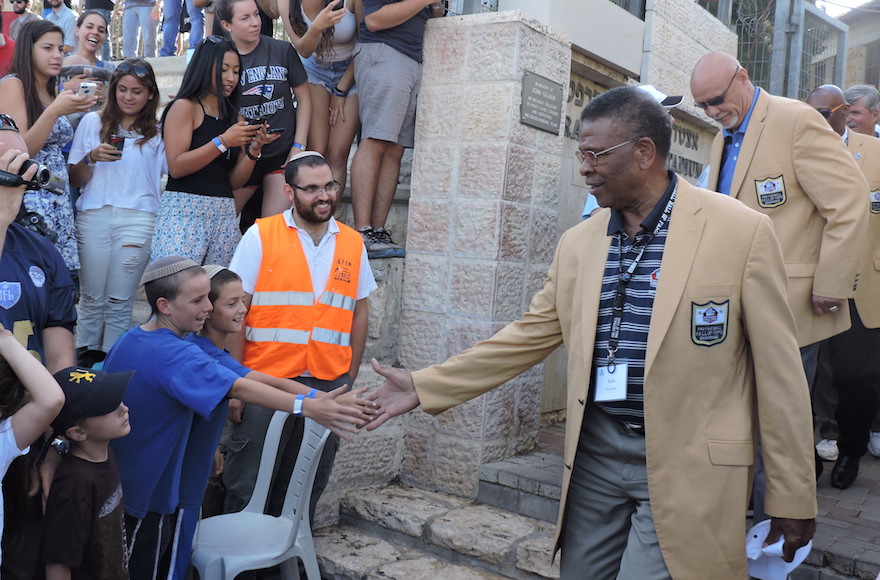 JERUSALEM (JTA) — The scent of hamburgers and beer wafted over the field. The fans were bathed in barbecue smoke.

The bleachers were cut out of Jerusalem stone, the field was made of artificial turf. The spectators who had come to greet a tour of Pro Football Hall of Famers sat in plastic armchairs that blocked off the red zones and end zones, with nothing separating them from the game being played at midfield.

The players — diminutive by National Football League standards — wore shorts and no padding.

Rather than tackle, they grabbed at flags tied around each others’ waists.

It wasn’t your typical American-style football game, but at least it smelled about right.

The sport that’s become a religion in the United States — bringing in hundreds of millions of viewers and billions of dollars annually – remains a curiosity in Israel, where “football” means soccer. It was brought here in 1989 by American expats who missed the feeling of getting in formation and throwing a spiral.

READ: Meet the Jewish 300-pounder from Hobart College heading to the NFL

Twenty-six years after Israel’s flag football league played its first season, it boasts teams in 46 cities across the country. There’s now a 15-team women’s league, too. A men’s tackle league founded in 2007 will field a dozen teams next season. And the Israel High School Football League has seven teams — from the Kfar Saba Hawks to the Haifa Rams. Its players, Israel Football League Commissioner Steve Liebowitz said, see the game as training for their mandatory army service. 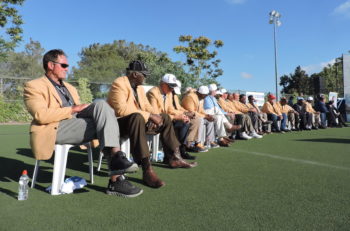 Nineteen Pro Football Hall of Famers on a tour of Israel organized by New England Patriots owner Robert Kraft at the Jerusalem stadium that bears his name, June 21, 2015. (Ben Sales)

“It used to be that they were American immigrants or kids of American immigrants,” Liebowitz told JTA. “Now it’s mostly Hebrew in the huddle. Not many people can make the soccer team in their town. They can come to football,” which fields larger rosters.

Among games called “football,” the American version still ranks a distant second in Israel to the sport that captivates the rest of the country and the world. The Americans who stayed up all night to watch the Super Bowl were no match for the crowds that pack bars every week to watch soccer.

But on Sunday evening, the laces briefly took center stage. A largely American crowd had gathered to greet 19 members of the Pro Football Hall of Fame who were in Israel on a tour organized by Robert Kraft, the owner of the Super Bowl champion New England Patriots and the sport’s benefactor in Israel.

READ: What Jewish ethics tell us about Deflategate

Kraft paid for the Jerusalem stadium that bears his name, and sponsors both the adult and high school tackle leagues. He’s also given widely to Jewish causes stateside, from sponsoring Columbia University’s Jewish student center to endowing chairs in Jewish studies at Boston College and Holy Cross College.

“I lead my life according to the four F’s — at least phonetically,” Kraft told the crowd. “Family, faith, football and philanthropy. This trip has connected all those dots for me.”

The event began with a men’s and women’s flag team scrimmage, which because of the truncated field turned into a parade of touchdowns. On the sidelines, boys in yarmulkes, ritual fringes and football jerseys mingled. Among them towered a broad man wearing a newsboy cap and a purple jersey that read “Big Mike.” The former college football player has been playing and coaching the sport in Israel for about a decade.

But the cheers rose when the Hall of Famers emerged one by one through a gate accompanied by Kraft and Ron Dermer, Israel’s ambassador to the United States and a former quarterback in Israel’s flag league. The delegation — all wearing the Hall of Fame’s trademark gold jackets — ranged from veterans of the 1960s league to recent retirees like Curtis Martin, a running back for the Patriots and the New York Jets. 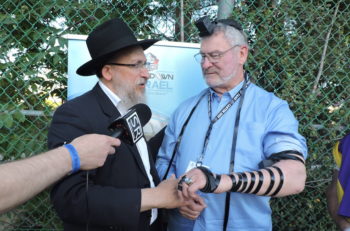 “To go to the Sea of Galilee, the Dead Sea, being baptized was a highlight,” said Floyd Little, the retired Denver Broncos halfback who underwent the rite in the Jordan River while on the trip. “I can’t express the emotion that brought.”

After a few speeches and introductions, the veterans lined up around the field’s perimeter, braving small mobs of fans, signing autographs and taking pictures.

It almost felt like America. Until, that is, a rabbi approached Ron Mix, a Jewish offensive tackle who played mostly for the San Diego Chargers, laid tefillin on his arm and had him repeat the Shema prayer out loud, word after word.

“I was surprised,” Mix said after the rabbi left. “I think it meant more to him than it did to me.”