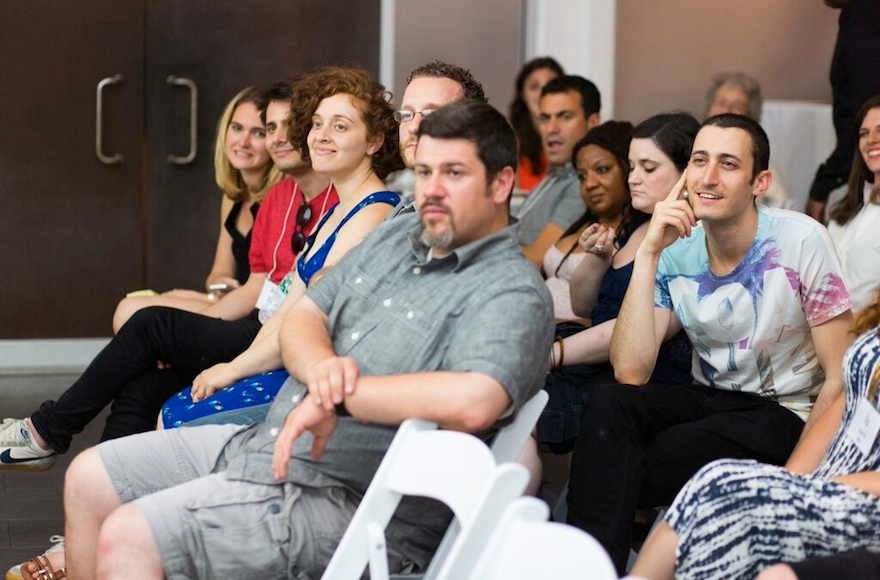 NEW YORK (JTA) — A. J. Jacobs is not one to forego a big project. The journalist and author spent 18 months reading the entire Encyclopedia Britannica, a year “living biblically” and another subjecting himself to every health regimen he could find. Most recently, Jacobs conducted a massive family history project.

One conspicuous gap in his catalog of experiences: a bar mitzvah, the widely observed, celebrated (and at times reviled) rite of passage for Jewish 13-year-olds. As a result, Jacobs told a group of youngish (mostly under-40) Jews at a recent event in Brooklyn, he suffers from “bar mitzvah envy.”

Jacobs was not the only un-bar mitzvahed person to take the stage earlier this month at New York’s debut “Rebar” event, a sort-of The Moth: True Stories Told Live gathering focused on bar/bat mitzvah memories. Several performers  — among them a convert to Judaism, a Catholic writer-actor and a novelist raised by a secular Jewish mother and lapsed Catholic dad — had not had a bar or bat mitzvah. In fact, those who had — including Vanessa Hidary, aka the “Hebrew Mamita,” and “Daily Show” writer Jena Friedman — were in the minority.

A project of Reboot, a Jewish nonprofit that, according to its website “engages and inspires young, Jewishly-unconnected cultural creatives, innovators and thought-leaders,” Rebar is an effort to “grow the number of people who are mindful about” the bar/bat mitzvah experience and “get them to think about what it means to grow up and be part of a community,” Robin Kramer, Reboot’s executive director, told JTA.

Kramer said she hopes that people who participate in Rebar will go on to plan more meaningful bar and bat mitzvahs for their own children.

The coming-of-age ceremony, in which the celebrant generally reads from the Torah on Shabbat, is often, to the chagrin of synagogue leaders, viewed by parents as the sole reason for enrolling their child in Hebrew school. For many children it’s seen as a sort of Jewish graduation — and a good excuse to make a viral video invitation.

READ: A burlesque bar mitzvah video and other ‘egregious’ trends

With the motto “Rewind to 13. Fast Forward to Today,” the Rebar project encourages adults to reflect on their bar/bat mitzvah experiences, think about what they might do differently today, and consider what it means to come of age and enter adulthood. Consisting of storytelling events like the recent one held in a hip, intimate (read: too small for most bar mitzvah parties) event space in Brooklyn’s gentrified Prospect Heights neighborhood, the initiative also includes an online, crowdsourced collection of bar/bat mitzvah photos and reflections as well as a “DIY kit” to guide would-be participants and organizers.

Reboot — whose other projects include National Day of Unplugging, a modern spin on Shabbat — is hardly the first Jewish group to turn its attention to the bar/bat mitzvah.

Since 2012, the Reform movement has overseen a pilot project called B’nai Mitzvah Revolution for congregations experimenting with the standard services-and-a-party model. In 2013, the New York-based Jewish Education Project devoted its “Jewish Futures”  conference to the topic, with a recurring theme being that the entry-into-Jewish-adulthood ritual is plagued by widespread ambivalence about just what Jewish adulthood should be. New York’s Jewish Journey Project (full disclosure: this writer’s two children are enrolled), an alternative Hebrew school program in which kids get to choose the classes they take, offers an alternative called Brit Atid (Covenant of the Future) in which kids study their Torah portions but then, rather than chanting them and delivering a typical d’var Torah, choose a creative way of presenting it in a group ceremony.

The Brooklyn Rebar event (ones have also been held in San Francisco and Los Angeles) seemed to do more rewinding than fast-forwarding. There were lots of humorous anecdotes and awkward photos — particularly of the over-the-top b’nai mitzvah parties attended and themes witnessed — and less emphasis on what the storyteller/participant might do differently today.

Hidary contrasted the lavish parties on Long Island — hosted by friends from Jewish summer camp who had “QuickBat” crash courses beforehand — with her own three-days-a-week-of-Hebrew-school servitude and the low-budget party in her family’s Manhattan apartment.

READ: How Jennifer’s bat mitzvah T-shirt turned up in Africa

Kate Scelsa, a young-adult novelist, said she did not have a bat mitzvah and had never “stepped foot in a temple” until seventh grade, when her classmates from private school invited her to their bar and bat mitzvahs, and “I was in temple at least once a month.” Her over-the-top experiences? A party in which the host rented out South Street Seaport and hired vendors to make guests an array of personalized souvenirs, including fake vanity license plates.

Instead of talking about his bar mitzvah, Chris Farber, a photographer and co-founder of the Rebar project, told about his conversion to Judaism (after which his friends threw a “Farb Mitzvah” party for him). The son of a secular Jew and non-practicing Christian, Farber explained that until he converted — a process that culminated in a mikvah immersion and symbolic circumcision — “because my mom wasn’t Jewish, Jews didn’t consider me a Jew, and because my dad was [Jewish], everyone else did.”

Sadly, he never addressed the question this writer was dying to know: What is it like to be Jewish and named Chris?

As for the bar mitzvah-envying Jacobs, one of his regrets at not having had the lifecycle event is his lack of Hebrew literacy and missed “executive training.” Plus, he said, “Having a bar mitzvah forces you in some small way to think about others, and I was a selfish little bastard.”