In Paris, planned Jewish center touted as proof community is here to stay 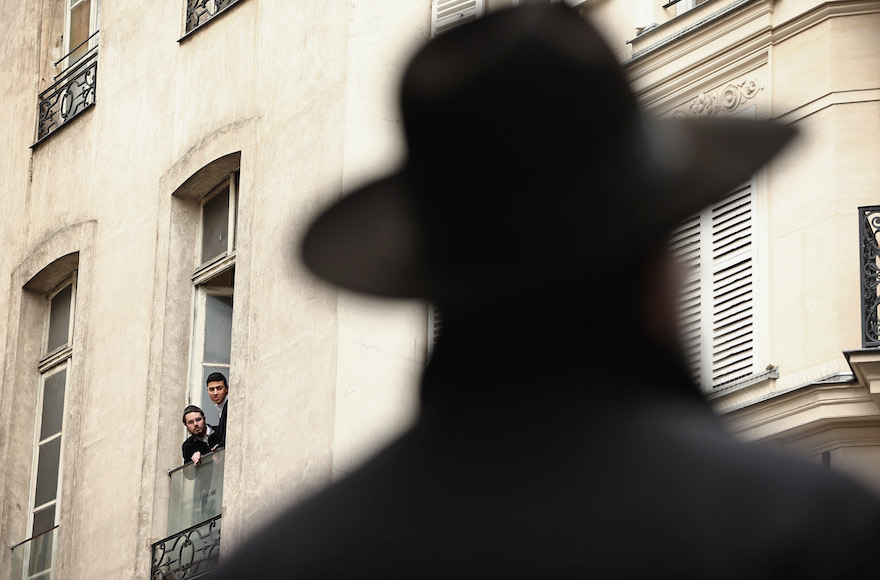 Students in the Jewish quarter of the Marais district in Paris, France, on January 12, 2015.
Advertisement

PARIS (JTA) – Elsewhere in the world, unveiling plans for a new Jewish cultural center might merit little more than a cocktail reception. But in this city, where Jews have been the target of rising anti-Semitic violence, the event was significantly more elaborate, with French Jewish leaders touting the blueprints as proof of the community’s viability and the government’s support for its survival.

The $11 million center, which is slated to open in 2017, will house a large synagogue, two exhibition halls, a gymnasium, offices and a large terrace to accommodate a sukkah. The complex, whose ground-up construction is scheduled to begin this week, will be situated on about 45,000 square feet in the posh and heavily Jewish 17th arrondissement, or district, of Paris.

First, however, several million dollars must be raised for its construction.

To that end, hundreds of guests including French Interior Minister Bernard Cazeneuve, the film director Claude Lanzmann and Maurice Levy, CEO of the advertising giant the Publicis Groupe, came out for a gala dinner. The singer-songwriter Enrico Macias, an Algeria-born Jew, performed at the gathering held at the ornate City Hall here, the Hotel de Ville. 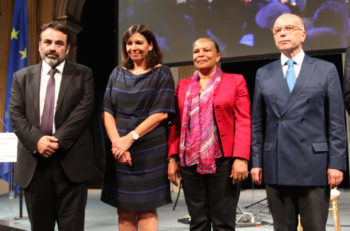 City Councilman Patrick Klugman, who represents the 17th arrondissement, said efforts to construct a modern Jewish community have been nearly a decade in the works. Dozens of offices of Jewish organizations are now crammed into a well-guarded, fortress-like building on Broca Street in the 5th district of Paris.

“This is the Jewish story: We build even if afraid, even if under threat. We build,” Klugman, who is Jewish and attended the gathering, told JTA.

But with France nearing record-level emigration to Israel amid a rising tide of anti-Semitism — including January’s attack on a kosher supermarket that killed four — one of the leaders of the effort to build the cultural center felt compelled to address concerns that the community is contracting.

“Many ask if now, when Jews are leaving, is a good time to build,” said Joel Mergui, president of the Consistoire, which maintains a network of synagogues and other Jewish institutions. “One has the right neither to criticize the departed nor to determine the future for the majority who stay. This new building shows that we and no one else own that future.”

Immigration to Israel has been driven by a variety of factors, including a stagnant French economy and a spike in anti-Semitic incidents. In 2012, a jihadist killed four Jews at a school in Toulouse. Since then, French Islamists have killed eight more people in two attacks on Jewish targets in France and Belgium.

On Jan. 9 this year, a gunman took shoppers hostage inside the kosher supermarket Hyper Cacher on the eastern edge of Paris. Dozens have been wounded, and hundreds threatened, in smaller-scale attacks over the past year, which Mergui called “the most tragic in French Jewish recent history.”

Cazeneuve, who attended the Paris gala with Justice Minister Christiane Taubira, said in his speech that he intends “to prevent this departure because French Jews are France’s soul.” The interior minister pledged to keep soldiers posted outside the new center and all other Jewish community buildings for as long as necessary to provide security from “terrorists who target France through its Jews, policemen, soldiers, journalists and all those who make up the republic’s vanguard.” 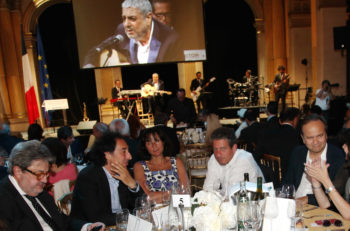 In Toulouse, Mohammed Merah killed three French soldiers before striking the school. And the Hyper Cacher gunman, Amedy Coulibaly, shot a police officer and belonged to a cell whose other two members murdered 12 people in an attack on the building housing Charlie Hebdo, a satirical weekly that regularly lampooned Islam and religion in general.

On Monday, during a speech at the Elysee Palace, French President Francois Hollande said the new cultural center is “the best answer to those who think that the future of the Jews of France is elsewhere.”

Paris Mayor Anne Hidalgo said that for her, “the center is a way to express our determination, after the bloodbath at the Hyper Cacher” and to “make not only France but all of Europe a place where Jews continue to feel comfortable to live.”

The municipality leased the new center’s land to the Consistoire free of charge and French government offices have pledged a quarter of the money required to construct it. The European Jewish Congress and its president, Moshe Kantor, earmarked additional funds.

Kantor, a Russian-Jewish engineer, urged French Jews to use the center for more than symbolic and communal purposes.

“Within the next 18 months, the jihadists fighting for the ISIS terror group will run out of resources,” he said at the gala. “When they do, the Europeans among them will return to Europe. They will target us. I recommend we use the new center as the seat of a think tank on security so when they do, we will be prepared.”

Anne Sinclair, an award-winning French-Jewish television journalist who is among the donors for the new center, imagines a different purpose for the new building.

“I picture it a place of tolerance, in the style of the French republic, a place where Jews and non-Jews meet, a place of openness and meeting point for the diverse Jewish community of all of France,” said Sinclair, the former wife of Dominique Strauss-Kahn, the disgraced chief of the International Monetary Fund.

Emil Courchia, a retired French government employee who came to the gala from his home in the affluent Paris suburb of Creteil, said,“the new center will be a life changer not because it will give Jews a chance to mingle but because it’s giving a rare hope at the end of a horrible year.”

But Jean Aroun, who is Jewish and hails from the poorer Paris suburb of La Courneuve, the building is “nothing more than a toy for the rich Jews of the 17th arrondissement,” he said at the gala, which Aroun attended as a guest’s plus one. “It will not change our daily reality, which is determined by friction with hostile neighbors who can turn on us at any second.”

Still, news of the new center is already inspiring French Jews far from Paris, including Toulouse, where the president of the local Jewish community recommended young Jews immigrate to Israel or other countries “where they can thrive in open Judaism” without fear.

“The new center won’t change our lives or allay our fears, but it’s a symbol that we’re here to stay and we don’t have too many of those,” Avraham Weill, the chief rabbi of Toulouse, told JTA.

CORRECTION: This story originally misidentified the Hyper Cacher gunman. It was Amedy Coulibaly.