Touch of Pray: Celebrating Shabbat and the Grateful Dead 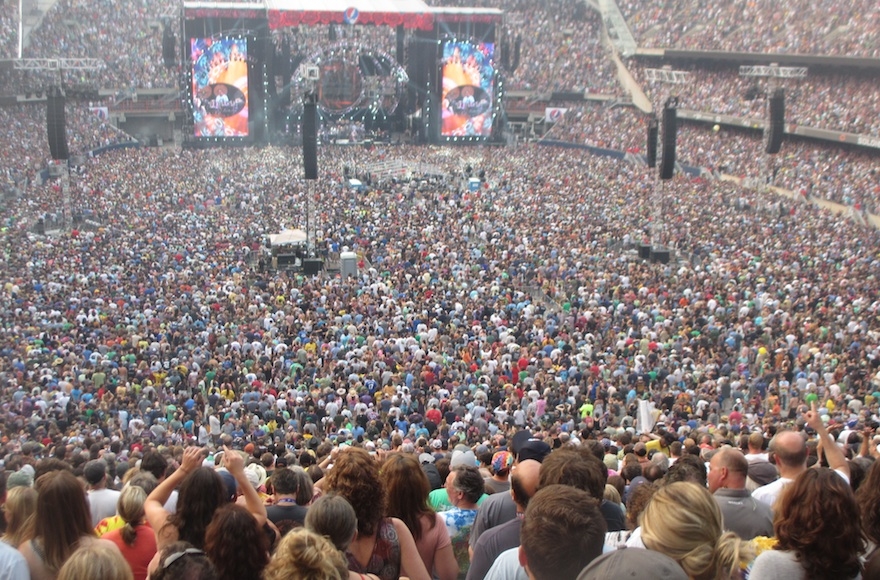 CHICAGO (JTA) — What a long, strange trip it’s been for Shu Eliovson.

The American-born resident of Kfar Maimon, a religious moshav in southern Israel, Eliovson is CEO and co-founder of the tech start-up Likeminder, an anonymous social networking site for “authentic conversation” with “likeminded” people. He is also an ordained rabbi, though his colorful pants, fedora and purple T-shirt with the Grateful Dead’s famed dancing bear logo make him unconventional, to say the least.

A father of five, Eliovson is also the founder of JamShalom, a “grassroots movement bringing spiritual connection to music festivals across North America.” Since 2011, he has become a legendary face and somewhat of a pied piper to fellow Jewish travelers on the American jam band scene. Eliovson speaks of music festivals as “a tremendous opportunity to create a spiritual encounter” and looks for places to “throw down a big Shabbos.”

“JamShalom is about celebrating the inherent spiritual joy of music, and its power to bring like-spirited people together and sharing a Jewish experience that is unique,” Eliovson told JTA.

And what better place to have an epic Shabbat “throwdown” than the Grateful Dead’s highly anticipated Fare Thee Well Tour — three nights of shows, Friday through Sunday, at Chicago’s Soldier Field marking the 50th anniversary of the band’s founding (as well as the 20th anniversary of the group’s final show with frontman Jerry Garcia)?

Typically, Grateful Dead shows (along with those of their like-minded brethren, like Phish) occur over several days at venues in which camping becomes an integral part of the experience. But due to strict ordinances against camping in downtown Chicago, Eliovson found himself in a bind in the weeks leading up to the Dead’s final shows: How to create a temporary, intentional community in a space where camping wasn’t allowed. And how would folks keep the spirit of Shabbat if they needed to shlep far distances to the stadium?

His “miracle” came in the form of Rabbi Leibel Moscowitz of Chabad of the South Loop. After a few calls, Moscowitz was able to offer use of an undeveloped (but highly visible to concertgoers) lot owned by a Chabad supporter. Eliovson was granted permission to set up several RVs and a Shabbat tent. Along with his 18-year-old daughter and a few members of the JamShalom crew, he set out by van from New York to Chicago, kosher food in tow.

On Thursday evening, the entourage began setting up camp — only to discover, at 9 p.m., that the ban on RV camping was to be strictly enforced, even on a privately owned lot. The JamShalom village was shut down; desperate posts on Facebook informed followers that the group was seeking a new site.

With Shabbat only four hours away, on Friday afternoon the group worked out a deal with a less conspicuous parking lot on South Michigan Avenue, one block from the Chabad HQ at a luxury residential building and just a few blocks from Soldier Field.

Volunteers quickly set up tents, chairs, tables and Grateful Dead-themed decorations.  The unexpected move meant canceling some advertised programs, like “Munches and Meditations with Rabbi Shu,” as well as the 3 p.m. “Beer and Blessings.”  But fortunately, by the time Shabbat rolled in, the tent, two RVs and a colorfully painted bus with “God is One” and “Na Nach” (for Rabbi Nachman of Bratslov) in Hebrew were set up on the site.

At 6 p.m., some 25 guests — who were encouraged to bring “instruments, voices and dancing shoes” — met for a musical Kabbalat Shabbat service. Rabbi Moshe Shur, the former director of the Queens College Hillel and a longtime member of the Jewish music scene, led the service with an inspiring rendition of “Lecha Dodi” set to the classic Dead songs “Ripple” and “Uncle John’s Band.” Midway through the service, those lucky enough to have tickets for Friday night’s show headed out.

Zach Finkelstein, 22, of Long Island, who drove from New York with the JamShalom caravan, was happy with the scene.

“It is almost like going to Israel,” he said. “You land, you feel it in your heart. You are home. There are no strangers. We are all here for the same reason — peace, music and a good time!”