Obama vs. Israel: The rhetorical faceoff on Iran 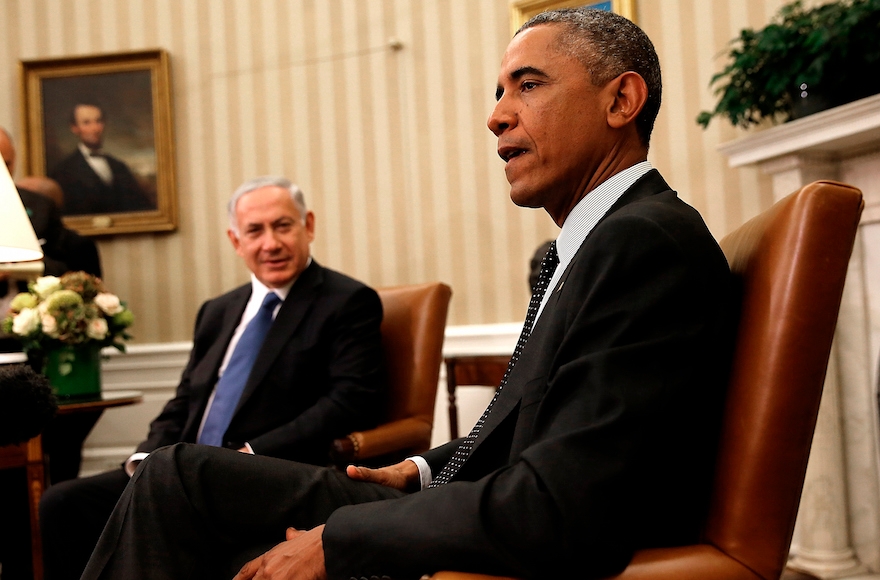 When the Obama and Netanyahu administrations argue over the agreement on Iran’s nuclear program, they often seem to be talking past each other.

So if you can’t decide who to support, here — point by point — are the government of Prime Minister Benjamin Netanyahu’s key criticisms of the deal struck Tuesday and President Barack Obama’s response to each argument.

(Israel’s criticisms are taken from a briefing on the deal Wednesday by Israeli Energy Minister Yuval Steinitz, the government’s point man on Iran. Obama’s responses are taken from an interview given Tuesday to the New York Times columnist Thomas Friedman.)

Israel says part of the money that will flow to Iran from the lifting of sanctions — some $150 billion in total — will go to Iranian-funded proxies like Hamas and Hezbollah, which threaten Israel.

Obama said the deal was never about stopping Iran’s terror activities, and that sanctions penalizing those activities will remain in place. The goal, he said, is to prevent an Iranian nuclear weapon:

“What we’ve been able to do is to ensure that Iran will not get a nuclear weapon, and that was always the premise of us building this strong international sanctions regime. The notion that the world signed up for these sanctions in order to either achieve regime change, to solve every problem in terms of Iran’s behavior or to say to them in perpetuity that they can never have peaceful nuclear power, that was never something that was in the cards.”

While the agreement may freeze Iran’s uranium enrichment capabilities for a decade, it keeps much of Iran’s nuclear infrastructure in place. During the time its enrichment capabilities are frozen, Iran will be able to continue its research and development of nuclear technology. Because of that, Steinitz said, the regime will be able to race to the bomb once the freeze ends:

“The assumption here is that Iran cannot be trusted, and therefore you need the agreement, but 10 years from now, Iran can be trusted like Holland … This might happen, but it’s only a speculation, and you cannot base the future of the world, the future of global security, on a speculation. …

“Our view from the outset was that this agreement should be about dismantlement. Iran has built its nuclear infrastructure illegally, secretly, underground. And therefore, Iran should dismantle what was built illegally.

“There is no total freeze here. They can make significant progress on one key element of the nuclear program: making more efficient centrifuges … Nothing will prevent them, because it’s legal now to buy material, or bring experience or knowledge from Russia or China or the West. … The breakout time can go down from 12 months to six months, and after 10 years to a few weeks.”

Obama countered that dismantling infrastructure would not make a difference, as that infrastructure is easy to rebuild. The agreement, he said, restricts Iran and disincentivizes a weapons drive enough to remove fears that Iran will produce a bomb:

“Prime Minister Netanyahu would prefer that they don’t even have any nuclear capacity, but really what that involves is eliminating the presence of knowledge inside of Iran. Nuclear technology is not that complicated today.

“And so the notion that the yardstick for success was whether they ever had the capacity possibly to obtain nuclear weapons — that can’t be the yardstick. The question is do we have the kind of inspections regime, and safeguards and international consensus whereby it’s not worth it for them to do it? We have achieved that …

“Ten years from now, 15 years from now, the person sitting in my seat, the president of the United States, Republican or Democrat, is not only going to have the same capacity to take necessary military actions or to impose new sanctions, but is actually going to have more insight into the program and will be better positioned, and will have international legitimacy, if they have to deal with a violation of the program.”

How strong is the inspection regime?

Inspectors from the International Atomic Energy Agency will have round-the-clock access to known nuclear facilities. But they will have to request access to military facilities where they suspect secret nuclear activity — a process that could take 24 days. That window, Steinitz said, allows Iran to hide violations of the deal:

“Let’s assume nuclear illegal activity — enrichment or weapons research — is taking place in that military site. Instead of [inspections within] two hours to 24 hours, you have a process — of demand, and reply, and this committee, and that committee — of 24 days altogether … The Iranians can trust that anything suspicious they will have enough time to hide, to clean, to move to another place.”

Obama said setting up a secret program on a weapons site would be near impossible given how closely inspectors will be monitoring the production chain of uranium and nuclear infrastructure. He added that even after a delay, analysis of soil from military sites will show whether the site hosted a nuclear program:

“We’re going to be seeing not just the confirmed sites, but the entire supply chain: their uranium mines, their centrifuge production facilities, where they make their parts, all the way to the confirmed sites … We’ll be counting how much uranium they’re taking out, and if the amount of material doesn’t add up, they’ve got a problem. If they make a spare part and suddenly we don’t see where that centrifuge part might have gone, they’ve got a problem. So diverting resources to a covert program becomes very, very difficult under this regime.”

A repeat of the North Korea deal, or an improvement?

Israel’s government sees the Iran deal as a repeat of the failed international agreement aimed at preventing a North Korean nuclear weapon. Those talks led to an agreement based on an inspections regime in the 1990s, but North Korea broke the agreement and tested its first nuclear bomb in 2006. Steinitz said:

But Obama said the negotiators learned lessons from what happened with North Korea and have created a more stringent inspections regime than what was instituted there:

“It goes far beyond anything that was done, for example, in North Korea. So that when you hear those analogies, about, well, there were inspectors there, and suddenly we didn’t know what happened, well, a lot of those lessons have been learned by the IAEA and the world community, and that’s what we were able to write into this deal.”