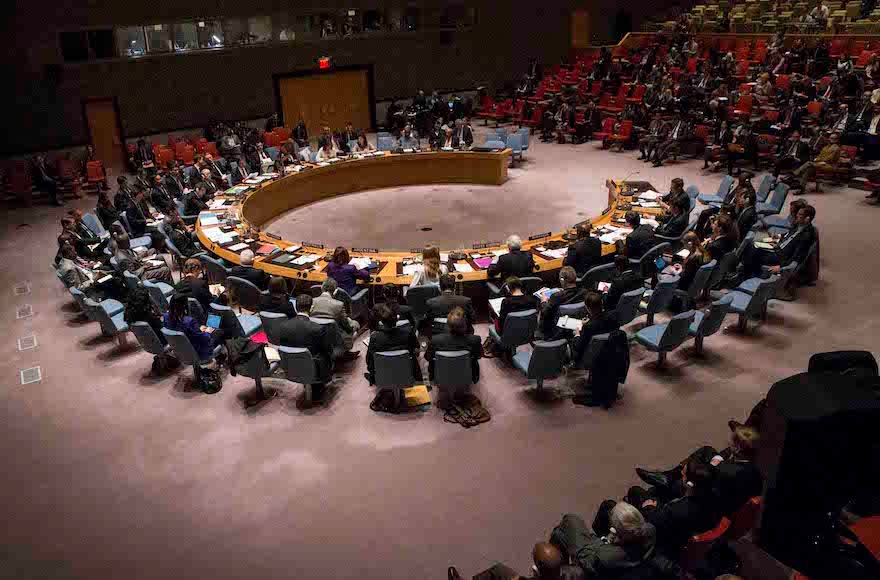 (JTA) — The United Nations Security Council and the European Union both approved the Iran nuclear deal.

The 15 members of the Security Council in New York unanimously adopted a resolution on Monday to approve the agreement reached in Vienna last week between Iran and the world powers.

Under the resolution, the United Nations will lift its sanctions against Iran after a report is submitted by its nuclear watchdog, the International Atomic Energy Agency, verifying Iranian steps curbing its nuclear program as agreed to in the Austrian capital.

“On the day on which the ruler of Iran has reiterated his intention to destroy the State of Israel, the U.N. Security Council is giving its approval to that same country, which has systematically violated the UNSC’s decisions and which calls for the destruction of Israel, a member of the U.N.,” Netanyahu said Monday in the Knesset. “The hypocrisy knows no bounds.

Netanyahu called on Congress to keep sanctions in place.

“They also say that a U.N. decision is the end of the story. This is not true, because as long as U.S. congressional sanctions are in place – and I remind you that the American economy is 40 times as large as the Iranian economy – Iran will be compelled in the end to make concessions, and not just receive them,” he said.

On Sunday, the Israeli leader voiced his opposition to the deal on American television in interviews on the ABC and CBS networks.

The European Union also approved the deal on Monday in a vote in Brussels. The EU also will gradually lift sanctions on Iran.

“It is a balanced deal that means Iran won’t get an atomic bomb,” said French Foreign Minister Laurent Fabius, according to Reuters. “It is a major political deal.”

The deal would remove international sanctions on Iran in exchange for Iran freezing and storing much of its nuclear infrastructure, ridding much of its stockpile of enriched uranium and converting its nuclear facilities for between 10 and 15 years.

On Sunday, the U.S. State Department officially sent the agreement to Congress, which has 60 days to review it.