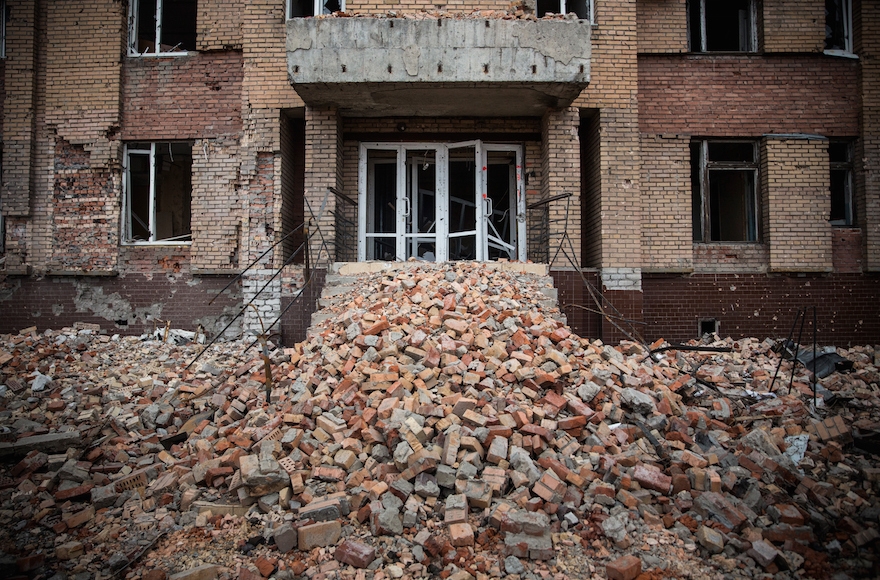 A heavily damaged hotel is seen near the Donetsk airport in Donetsk, Ukraine on February 26, 2015. (Andrew Burton/Getty Images)
Advertisement

(JTA) – For many years Rami Waisman, the director of a major jewelry chain, was earning enough to give back handsomely to the Jewish communal institutions in his eastern Ukraine hometown, Dnepropetrovsk.

But these days Waisman is struggling and can no longer financially support such institutions as the local synagogue, mikvah and Jewish day school where his son attends kindergarten. Ukraine’s military conflict against Russian-backed rebels has wreaked havoc on the Ukraine currency, halving the value of its hryvnia against the dollar since 2013.

For Ukrainian Jewry — Europe’s second largest community after France, with approximately 350,000 members — the crisis has resulted in a major setback for homegrown philanthropy and a return to reliance on foreign assistance from Western Jews.

“The customers, who have largely stopped buying anyway, pay in hryvnias, whereas we buy silver in dollars and euros,” Waisman said, noting that it’s meant a 50 percent drop in revenue for his company. “I still try to give when I can, but it’s not like before.”

From total dependence on aid from the West just after the fall of communism, Ukrainian Jewish communities had become far more self-reliant beginning about 10 years ago due to the rise of the middle class in Ukraine and a Jewish cultural revival whose growing popularity had a snowball effect, including on donations.

In addition to a handful of oligarchs like Vadim Rabinovich — the former media tycoon brought Ukraine its first Limmud Jewish learning conference before he lost much of his fortune and became a lawmaker — Jewish communities also relied heavily on smaller donations by businessmen like Waisman. Typically, those philanthropists would donate to a Jewish nonprofit of their choice or directly to a local rabbi coordinating the activities of several such nonprofits.

In recent years, before the 2013-14 revolution and the onset of the conflict with Russia, “Ukrainian Jewish communities [had] moved to a situation where 40 to 60 percent of their budgets are raised locally,” said Yaakov Dov Bleich, a chief rabbi of Ukraine and president of the Jewish Confederation of Ukraine.

Bleich noted that local donors raised about 50 percent of the $4.5 million budget for his Jewish community in the capital city of Kiev. Leaders of other Ukrainian Jewish communities, including Chabad, reported a similar breakdown. But Bleich said the war “wiped out this local donor base, making Ukrainian Jewry once more dependent on charity raised abroad.”

In Dnepropetrovsk, local donations decreased in 2014 by 30 to 35 percent from 2013, according to Zelig Brez, the community’s director.

Meanwhile, the Jewish community of Donetsk, once an affluent city with 10,000 Jews before most of them fled the ongoing urban fighting between pro-Russian separatists and government troops, had become largely self-reliant, according to its chief rabbi in exile, Pinchas Vishedsky. 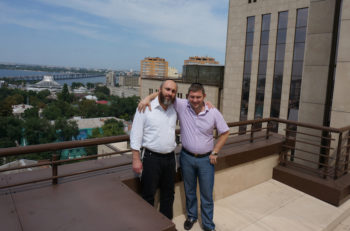 Zelig Brez, left, the director of the Jewish Community of Dneproptrovsk, with a local donor, Natan Zolotarevsky, on the roof of the Menorah Center in the eastern Ukraine city, July 15, 2014. (Cnaan Liphshiz)

Donors in Donetsk, including wealthy oligarchs, became a major source of funding about a decade earlier. Before that, the American Jewish Joint Distribution Committee, or JDC, and other international groups made up the majority of Jewish communal budgets, said Vishedsky, a Chabad rabbi who fled to Kiev.

Much of the budgetary void created by the crisis is being filled by the International Fellowship of Christians and Jews, or IFCJ, a Jerusalem-based organization with many Christian donors in the United States that funds JDC, Chabad and other bodies involved in relief action in Ukraine.

IFCJ added $2 million in 2014 to the $8 million it allocates annually in aid for Ukrainian Jews. It was a response to the needs of local Jews at a time when their country descended into chaos during the bloody revolution that ended early in 2014 and led to the current conflict in eastern Ukraine.

Erupting in November 2013, the revolution against then-President Viktor Yanukovych came amid allegations that he was a Kremlin stooge and deeply implicated in corruption. Yanukovych denied the claims but was ousted from power in February 2014 after he declined — reportedly under Russian pressure — to sign a trade treaty with the European Union.

Russia invaded and annexed Ukraine’s Crimean Peninsula shortly after Yanukovych was ousted, citing the need to protect ethnic Russians and other minorities — Ukraine’s newly elected president, Petro Poroshenko, called the assertion a fallacy meant to disguise a land grab. The rebels seceded from Ukraine shortly after the Russian invasion, triggering a humanitarian crisis that has left hundreds of thousands homeless or internally displaced.

Some of the money collected for Jewish refugees by IFCJ went to encouraging their immigration to Israel, which doubled last year, surpassing the 6,000 mark. But most went to security, medicine, clothing and food packages.

JDC also supplied emergency funding in 2014, adding $3.2 million to the core sum of $7.5 million that JDC had already pledged for Ukraine in its budget for last year. Overall, JDC’s core expenditure in Ukraine has decreased from $8.3 million and $8.7 in 2011 and 2012, respectively, to $7.6 and $7.5 in 2013 and last year. But Michael Geller, JDC’s media relations director, told JTA that the level of aid had not been diminished as a result of the dollar’s growing purchasing power against the Ukrainian currency.

Bleich, for his part, is currently on a fundraising trip in his native New York.

An unorthodox attempt at raising U.S. dollars was unveiled in recent weeks by Rabbi Moshe Azman, an influential yet unaffiliated rabbi from Kiev. Azman started a Jewish refugee village near the capital named for the fictional village of Anatevka from the hugely successful Broadway musical “Fiddler on the Roof.”

An English-language fundraising website for the $6 million project, which is scheduled to launch in September, boasts half-built traditional wooden houses like the ones that served as the inspiration for the village. The roof on one of the houses even features a fiddler’s silhouette.

Still, Vishedsky believes in Ukrainian Jewry’s ability to pick itself up with or without Western assistance.

“The willingness is there. The mentality of giving is something we built that no bomb can destroy,” he said. “As soon as things settle down, the Jews who stay in Ukraine will start to rebuild with our own two hands.”