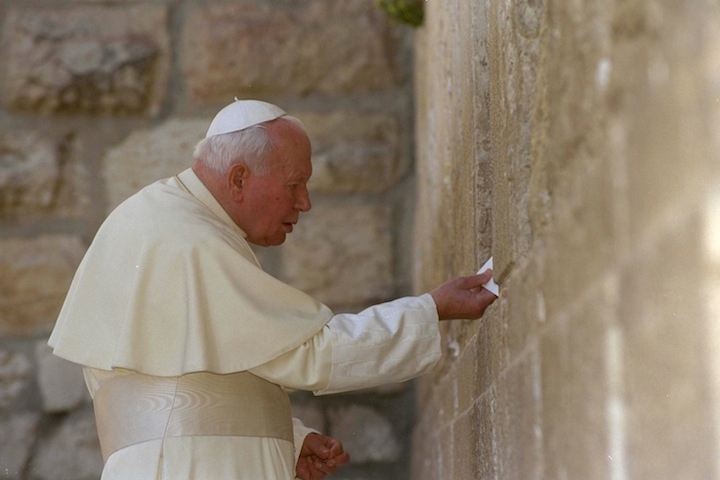 ROME (JTA) — The Vatican Museum opened an exhibit in Rome dedicated to the strong relationship between Pope John Paul II and the Jewish community.

The exhibit, “A Blessing to One Another: Pope John Paul II and the Jewish People,” opened Tuesday and features photos, video footage, documents and artifacts.

Rome’s Chief Rabbi Riccardo Di Segni, who attended the opening, recalled one of the pope’s most powerful gestures — the historical visit to the Great Synagogue of the city on April 13, 1986.

“It’s quite curious seeing the picture of a pope together with a rabbi, my predecessor Elio Toaff, all around in the Vatican,” Di Segni said.

Pope John Paul II, who died in February 2005, visited Israel in 2000, leaving a prayer in the Western Wall asking for divine forgiveness for the treatment that Jews had received from the church in the past and reaffirming his commitment to good relations. Visitors to the exhibit can write a prayer to be placed in a reproduction of the wall, which later will be taken to the Western Wall in Israel.

The exhibit was presented originally in 2005 as a gift to John Paul II for his 85th birthday and dedicated to his contribution to interreligious dialogue. It opened at Xavier University — its co-creators were educators at the Cincinnati, Ohio, school — and since then has been visited by over 1 million people at 18 U.S. locations.