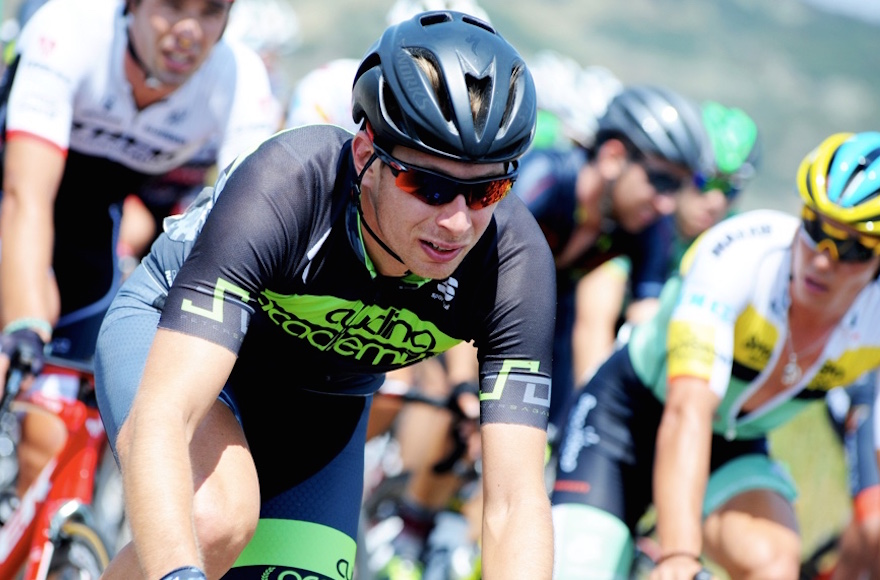 (JTA) – As Israeli bicyclist Yoav Bear sped through the end of Stage 2 of the U.S.A. Pro Challenge race at nearly 11,000 feet of elevation in the Colorado Rockies, he thrust his water bottle into the hand of a young spectator clutching an Israeli flag.

Bear’s gesture made the day, if not the vacation, of the 13-year-old bystander, Ilai Engelhardt, a resident of the northern Israeli town of Avtalion who loves competitive biking. On Tuesday, his American uncle and aunt had brought Ilai to the race, which aims to be America’s version of the Tour de France and runs for a week every summer.

Bear said that seeing an Israeli flag along the route warmed his heart.

“The encouragement spurs you to ride faster,” he said.

In the fifth year of the U.S.A. Pro Challenge, an Israeli team is making its debut among the 16 teams competing.

The mere existence of the Israeli team, called Cycling Academy, is remarkable. The idea of forming an Israeli club to compete on the international circuit developed serendipitously in late 2013, when Ran Margaliot, a former Israeli national cycling champion, went for a ride in the Nes Harim foothills outside Jerusalem and met Ron Baron, a recreational biker and fan of the sport.

Baron, a finance industry professional who lives near Tel Aviv, agreed to put up almost all the money required (about $1 million this year, with $100,000 going to cover the Colorado costs alone), and the pair got Peter Sagan, a successful Slovak cyclist, to lend his name to the venture.

Margaliot, 27, calls the team a typical Israeli start-up — albeit in a realm where until now Israel has been virtually absent. Margaliot long had dreamt of becoming the first Israeli to qualify for the Tour de France, presumably on some other country’s team, but after falling short he turned his attention to improving opportunities for other Israelis.

The team aims to project a positive image of Israel at races and events – to show that it “is a normal country, and that this is part of the development of a young country,” Margaliot said.

The Cycling Academy’s 13 riders, all men, include five Israeli Jews and eight non-Jewish Europeans: four Poles, two Slovaks, a Czech and a Spaniard. Its diversity is by design, according to Baron, who owns the team. He wants to attract fans from the riders’ homelands, many of which, like Israel, lack a professional cycling culture.

The Israeli team has received inquiries from competitive cyclists throughout the world – including riders from Morocco, Algeria and even Iran, according to Baron. The Israeli rock star Ivri Lider, a biker, was enlisted to design the team’s green and black uniforms. 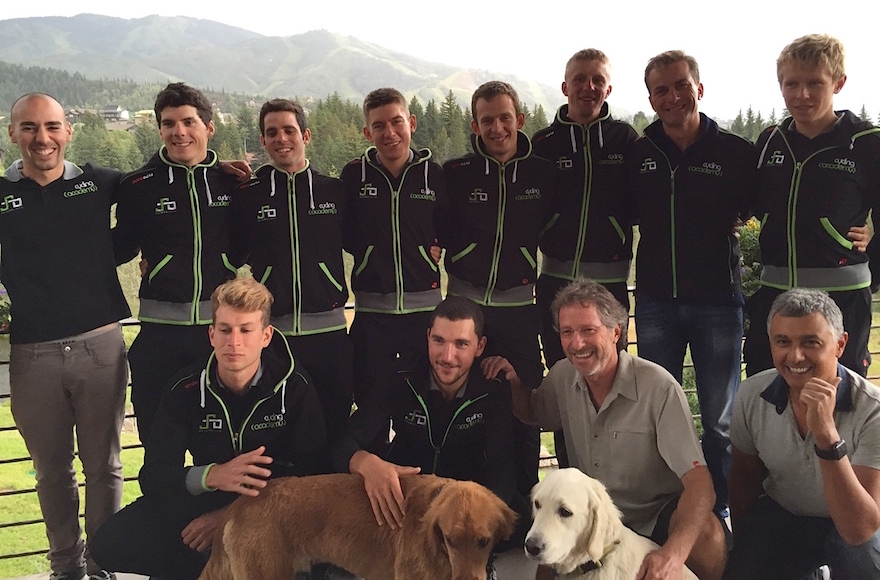 Members of the Cycling Academy, Israel’s first professional team, were hosted by Michael and Michelle Osterman in Steamboat Springs, Colo., on the eve of the start of the U.S.A. Pro Challenge, Aug. 16, 2015. (Courtesy of Cycling Academy)

Among the highlights of the team’s first year are winning stages of the Tour d’Azerbaidjan, the Tour de Berlin and the four-country Visegrad 4 Bicycle Race.

The spectacle of the Israeli club’s rider — Daniel Turek of the Czech Republic — leading in Azerbaijan, with spectators in the Muslim-majority country lining the course, “was a proud moment,” said Tsadok Yecheskeli, an Israeli journalist who is handling the team’s media relations.

The cyclists train in Slovakia and Israel, but Colorado is being considered as an additional training site, Yecheskeli said. That’s because the altitude there offers ideal training opportunities — and because, Margaliot said, the team has received a warmer welcome this week in the state “than anywhere else in the world.”

As at other races, the Israeli team has built support this week distributing Israeli flags to bystanders at each stage of the Colorado competition. The race started Monday in Steamboat Springs and winds between several ski resorts before ending Sunday with a final leg stretching from the city of Golden to Civic Center Park in Denver.

One non-Jewish spectator, Gary Burge, waved the Israeli flag at Tuesday’s stage in the mountains outside Steamboat Springs. A veterinarian, Burge was there with his wife, Lori, and another couple because they are all cyclists who admire the world-class athletes competing.

“I don’t think it changed anything about how we look at Israel and the plight of Israel because we know it very well. But it’s one more thing to be inspired by,” Burge said. Noting the appeal of rooting for an upstart on the circuit with talented young riders at its core, he added, “You don’t have to be Jewish to be aligned with them.”

Burge said the couples were drawn to the team when their Jewish friends, Michael and Michelle Osterman, hosted a reception Sunday for the riders. The Ostermans had learned of the Israeli team’s existence just four days earlier.

Last Friday, the team’s director, Slovakia native Jan Valach, asked Michael Osterman to take the cyclists on a training ride. Osterman went the request one better, bringing them to the course of Stage 1, which they’d cycle three days later.

“It never dawned on me that Israel would have a pro bike team,” said Osterman, a retired marketing professional. “They’re planting the seeds to create something for the future — although for this event, it’s a pretty big deal that they made it this far, this fast.”

Osterman’s son, Matthew, runs a family business in Denver, the Sleeping Giant Brewery Company, which will host the Israeli squad for a mellow evening of drinking craft beer next Monday, after the race is over.

There’ll be chairs there, of course. But after sitting all week, the cyclists might very well opt to stand on their own two feet.