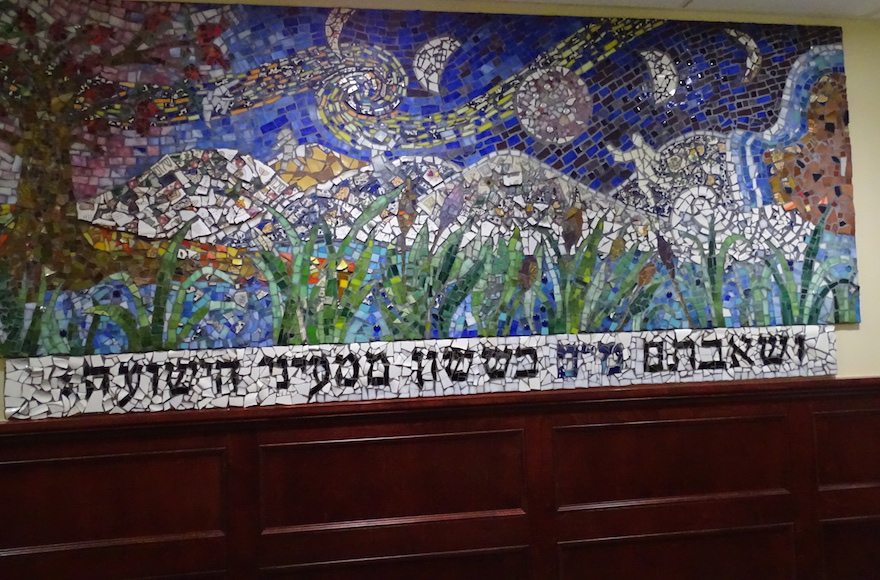 After months of work, the mivkeh was dedicated at Orthodox synagogue Oveh Sholom on Aug. 16, in Washington, D.C. ( Suzanne Pollak/WJW)
Advertisement

WASHINGTON (Washington Jewish Week via JTA) – When prominent Washington rabbi Barry Freundel was arrested last year for secretly videotaping dozens of women using the mikvah adjacent to his Orthodox synagogue, the sense of sacredness of the ritual of mikvah immersion was shattered for some local Jewish women.

Local artist Rena Fruchter recently spearheaded a community project to put the pieces back together: A mural created by female members of Ohev Sholom – The National Synagogue to place inside the mikvah affiliated with their own Washington congregation.

After months of work, the mural was dedicated on Sunday.

Freundel led Kesher Israel, a different Orthodox synagogue in Washington, until his arrest last October. As part of a guilty plea, he admitted to installing video cameras in the National Capital Mikvah next to the synagogue. He was sentenced in May to more than six years in prison for 52 counts of misdemeanor voyeurism. He has filed notice that he will appeal the sentence.

Elanit Jakabovics, the president of Kesher Israel, endorsed the mural project even though it’s part of a different synagogue, noting that Freundel’s actions had hurt Jews across Washington and even the world.

“I strongly support anything that helps the healing,” she said. “You know the pain is never going to go away.” 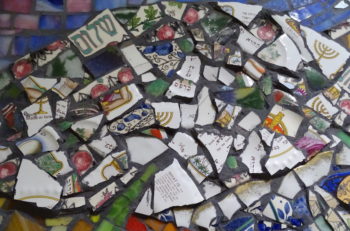 The mural’s design is the result of collaboration between Fruchter and local artist Arturo Ho, with input from women from Ohev Sholom, Aug. 16, Washington. (Suzanne Pollak/WJW)

The colorful new mural features a Van Gogh-like swirl, women dancing, moons, water, reeds and the words from Isaiah 12:3, in both English and Hebrew: “Joyfully shall you draw water from the fountains of redemption.”

The design is the result of collaboration between Fruchter and local artist Arturo Ho, with input from women from Ohev Sholom.

After collecting glass objects in donation boxes stationed at their synagogue, Fruchter organized weekend gatherings of women from the synagogue to break the glass up and reassemble it.

The mood at the gatherings was celebratory. Women sipped margaritas and mojitos as they worked, and sometimes mothers brought their daughters to chip in.

“Women came and hung out. They got to know each other,” said Ruth Balinsky Friedman, a clergywoman at Ohev Sholom. “The women took the mikvah space defined it and demystified it.”

About 60 women participated in the gatherings, which started soon after Passover.

Ariele Mortkowitz contributed to the project with her mother and 6-year-old daughter. Before moving to near Ohev Sholom, Mortkowitz had used the National Capital Mikvah. That “mikvah is near and dear to me. I still have friends there,” she said. “Freundel was a big blow around mikvahs in general, and this could make it a better experience.”